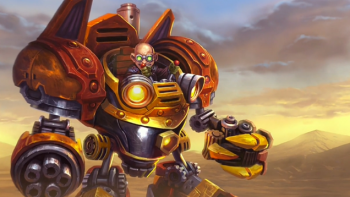 At BlizzCon 2014, I got to sit down with Yong Woo, Senior Producer on Hearthstone to discuss the CCG's first expansion, Goblins vs Gnomes, which is due to launch in December. I also got the chance to tinker (pun is definitely intended) with some of the new cards in a couple of duels, although the decks were pre-made, and were obviously designed to demonstrate the new cards and mechanics, rather than highlight the most effective strategies.

The pre-made decks only contained cards that have already been revealed (check out the gallery), but seeing them in action definitely gives you a better sense of what to expect when the expansion hits. That said, even after several matches, you won't know "what to expect" per se, because of the frequency of the word "Random." Woo made it very clear, however, that the Hearthstone team doesn't see this as a bad thing, and the team as a whole expects a healthy shift in the casual and competitive meta game when Goblins vs Gnomes hits next month.

The frequently-uttered phrase "delightful surprise" is something the team takes to heart, and is much of the core philosophy for Hearthstone as a whole. From the wildly random Arena scheme, which lets you pick a random hero and 30 random cards that comprise your deck, to the experience of opening booster packs, which contain randomize cards, the core Hearthstone experience already has a huge random element. Not to mention the randomness of drawing cards from a shuffled deck, of course.

I'm skeptical that competitive players will adopt so much randomness, though, but Woo admits that those players who want to avoid random elements - these players already play highly consistent decks - will have no choice but to adapt to other players who do adopt cards from the highly-random expansion. That said, I do expect this to have a great impact on the lower ranks in Ranked play, as more casual players are more likely to enjoy winning out of the blue, and be less reluctant to lose on a whim.

The Priest deck I got to play with was Gnome focused, while the Mage deck was Goblin oriented. Both were hilarious, but with the limited number of cards that have been revealed, there was a lot of overlap in the cards I saw. Despite Woo's personal affection for the Mage-specific Unstable Portal - a spell that puts a random minion into your hand and reduces its mana cost by 3 - I personally felt that the Priest class card was more powerful by no small margin. Five mana for a 5/5 creature with a Battlecry to add four health to another Mech minion you control is a little bit nuts.

Acquiring the Goblins vs Gnomes cards will follow the same general scheme as the current Expert Set, with Booster Packs being available for purchase at 100 Gold each, or via real-money purchase at the same pricing structure. Additionally, when the expansion launches next month, you'll be able to earn the GvG packs via Arena rewards. This is all part of the team's plan to maintain the genuine "free-to-play" experience that Hearthstone has generally done so well in upholding to date.

In addition to the ease of access, if you've been saving up Dust, you'll actually be able to craft the expansion's cards once it hits. If you've been dusting extra cards for months, as I have, you've probably got a decent cache of dust sitting around, and this will finally give you something to do with it, which is a fantastic move on Blizzard's part.

While I'm skeptical that the totally random effects will necessarily have much impact on the Hearthstone meta, the fact is that many of these cards will see play at even the highest levels of competition, so you should definitely keep an eye on the upcoming reveals. Woo was tight lipped about how and when they'll be revealing the rest of the expansion's cards, but he did insist that they'd see the light of day before the expansion itself, so if you want to stay ahead of the game, keep an eye on the official Hearthstone Facebook and Twitter accounts for more reveals over the next few weeks.

Stay tuned this weekend for more from BlizzCon 2014.