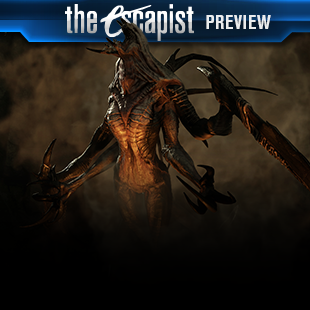 I creep towards a large platform that lies a stone's throw away from four gun-wielding humans protecting a power relay. I can smell their fear. The hunters have now become the hunted.

I summon a body double in their direction and the squad instinctively concentrates their gunfire on my illusion. Now cloaked with invisibility, I tiptoe towards a ridge overlooking the platform and set my sights on the medic Lazarus, who's busy foolishly firing a machine gun at my decoy. I charge with alarming speed, grab him with my long tentacles and pull him back to the ridge -- like a wolf separating a sheep from the herd. Lazarus yells at his teammates for help, but it is too late. I've unleashed an energy burst from my body, leaving a lifeless corpse at my tentacled feet. His teammates desperately try to trap me there, but I've already begun slinking back into the shadows. Soon I'll prepare my next stealthy strike.

They're pacing in tight circles, cautiously peering into the jungle as if expecting a ghost. I am their ghost.

With the Wraith, Turtle Rock Studios has saved the best monster for last. The developers of Evolve previously unveiled two massive alien beasts -- each with their own unique brand of mayhem. The bulky Goliath plays something like King Kong, leaping into the fray and unleashing crushing melee attacks as bullets seem to bounce off his granite-like skin. The Kraken keeps his distance, hovering above the battlefield and sending down bolts of lightning from afar. In sharp contrast, the Wraith can't stand toe-to-toe with the hunters and lacks in the way of ranged attacks. It plays the role of guerilla fighter, tapping an arsenal of sneaky tricks and quick bursts of damage to help make up for a lack of health and armor. Turtle Rock co-founder Chris Ashton describes the monsters as roughly equivalent to fantasy role playing archetypes: If Goliath is a tank, and the Kraken a mage: the Wraith is like Evolve's stealthy female assassin (yep, Turtle Rock say she's female).

As such, there's a larger learning curve to overcome when mastering her techniques. I wanted a chance at besting real-life opponents before leaping into multiplayer, so I initially got some practice in Evolve's short single-player campaign mode, which offers the option of playing against A.I.-controlled bots. Even against the computer, I handily lost my first four matches as the Wraith because I unwisely favored the brawn over brains approach. You're so much bigger and stronger than the individual hunters that there's an instinct to rush in with guns (tentacles?) blazing against the lot of them. But a well-coordinated group of hunters can easily dispatch the Wraith who mimics the Goliath's balls-to-the-wall tactics.

I learned the hard way that it's best to adapt to the Wraith's powers. There are four of them to choose from: Warp Blast, Decoy, Supernova and Abduction. Of them, Warp Blast is the most straightforward. It's a kamikaze attack that flings you to a target and creates a devastating area-of-effect explosion. Supernova turns the Wraith into a frenzied melee fighter for a brief period of time -- letting her cut down enemies with her sharp, scythe-like blades. The only downside is that you can only use it within the zone you activated it in. Leave the area, and she returns to normal. The Abduction power zips the Wraith towards a target over long distances and kidnaps them to her original location. It's a skill shot that should only be used situationally -- missing your target tells the hunters where you've been hiding. The real ace in the hole is the decoy power, which spawns a clone of the Wraith. Your double both attacks targets and creates a clever diversion that allows the Wraith to become invisible and escape from combat or seek a new position for a surprise attack. There are times when it's best to stand and fight and take some damage, but only when you have the distinct advantage, like when the medic is incapacitated.

Once you adapt to the hit-and-run style of the Wraith, she becomes an incredibly fun monster to inhabit. Unlike playing with the Goliath and the Kraken, there's an added psychological edge because she adds a fear of the unknown to the hunters. Stray too far from your teammates and you can be abducted. That alien attacking you could be a mirage, while the real monster could be sneaking right behind you, waiting to spring. It's like you're the Predator or Batman in the form a creature straight out of the H.R. Giger handbook.

The Wraith actually might be a little too fearsome, in fact. I won 80 percent of my matches with her in multiplayer and I sat helpless as a member of the Turtle Rock Studios dev team totally demolished my group of hunters as the monster. But that's based on a small sample size, and the Evolve team is constantly engaged with play balance. I'm sure they'll be monitoring the Wraith closely during the upcoming open beta.


Either way, I can't wait to jump back into the role of the Wraith when Evolve launches Feb. 10 for Xbox One, PS4 and PC.
Related to:
ryan smithevolvepreviewtake-twoturtle rock studiosvideo games
0
Tweet