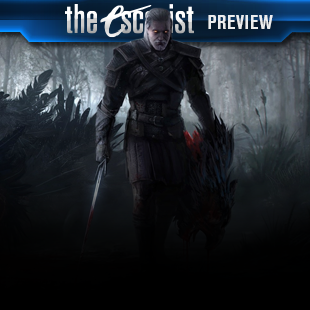 It's almost hard to believe, but CD Projekt Red has been bringing The Witcher series to us for nearly a decade now - you may now feel old. The original Witcher game came out in 2007 and its sequel a few years later in 2011. Just to put that in a little better perspective, the first Witcher game used the same engine as Neverwinter Nights. While CD Projekt Red does have some other projects in the works these days, the Witcher series has been its sole focus thus far and it's certainly been working for the company. Whether it's the dark fantasy setting - one of the first, at least in the gaming space - their specific brand of story-telling, or even just the company's commitment to being PC focused and against DRM, The Witcher has found a core, dedicated audience. Last week, I finally got the first hands-on time with the upcoming third installment into the series, The Witcher 3: Wild Hunt.

Much like The Witcher 2: Assassins of Kings, Wild Hunt is going to be bringing a number of changes for everyone's favorite moody, white-haired protagonist, though the basic formula is still largely unchanged. You're still going to be mostly playing as Geralt of Rivia, a titular witcher. Witchers are monster hunters, specially trained and even genetically augmented for the task of hunting down some of the nastiest beasts around. Many of which look and act like the twisted darker versions of other myths and legends. During the extended session, I got the chance to track down and slay a particularly gruesome looking griffin - quite unlike the stately creatures they are normally portrayed as. I say "mostly" playing as Geralt because CD Projekt Red has previously announced that some portions of the game will have you controlling another character, Ciri, instead. Ciri has a number of connections to story, and specifically Geralt, that I don't want to get into and spoil here, but of the time I got to play - the beginning of the game and then another section a bit further on - I didn't encounter any of these Ciri sections, so I can't comment on whether she plays any differently, or is a model swap of Geralt. I do hope it's the former.

Besides being good at killing monsters, Geralt's other knack is for getting wrapped up in much larger social and political plots than any glorified exterminator has any right to be. Initially Geralt, having finally recovered his memories, is trying to track down Yennifer, a sorceress and old lover. From there the story moves to trying to find Ciri as well. Geralt claims he's only looking for Ciri for his own reason, but there are some extenuating circumstances. If you're familiar with the other games and lore, it's pretty easy to pick up on how all of this is going to snowball into bigger issues.

The Witcher 3: Wild Hunt picks up a bit after the events of Assassins of Kings. The Nilfgaardian Empire is currently occupying the country of Temaria and many of the quests in the opening sections are tied to this. Like a blacksmith's forge being burned down in retribution for fixing the occupying soldiers' gear or "bandits," Temarian soldiers turned freedom fighters, attacking Nilfgaardian caravans. Knowing CD Projekt Red who love to delay showing you the consequences of your decisions until you feel like you're stuck with them, I can already see some ground work in some of these early quests. There's no immediate +10 lawful peaceful moral points or -15 so and so things you're a big meanie here, just consequences. I'm looking forward to getting more time with the game and seeing what happens because of these early choices.

The only point against The Witcher 3: Wild Hunt quests is that a noticeable number of them did seem to follow a repeating pattern. Granted at least it's not "go kill 15 wild dogs", but many of them shared the structure of having Geralt follow a path with his Witcher Sense, occasionally stopping to examine and trigger some dialogue or the next step. Witcher Sense, a new addition, plays very similarly to Batman's Dective Mode from the Arkham series with objects being highlighted and other otherwise hidden information, like tracks, becoming visible. It's not bad, and the story usually makes up for the tedium, but it would be nice to see just a little more variety.

Though if you do get bored of following paths around with Witcher Sense, there's a lot else you can spend your time doing. The Witcher 3: Wild Hunt is simply huge. There's a reason why you start the game with a horse, you're going to need it to traverse the map in a timely manner. It's not quite open-world, similar to the last entries you jump from region to region, but each of those zones are quite massive and more open than previous Witcher games. Thankfully there are fast travel points, and a nifty system for holding down a button and your horse will follow the current road or path you're on. These little details help make the whole experience better.

It also gives you a much grander scale for your adventures, and can make certain tasks like tracking down a specific monster more than just a scripted event. The graphics help to sell this as well. While I did notice some models and textures popping in, this is an unfinished build. The lighting engine was particularly pretty with lots of happy little sun beams peeking through the trees. These big zones are filled with quests and other points of interest. Everything from monster nests, quests, secrets to uncover, runes to level up your abilities, and of course mini-games. The new mini-game, Gwent, has you placing cards in rows, a simplified battlefield of melee, ranged and support, with raw and powerful cards scattered throughout the game to track down.

Granted it's not all sun beams and pleasant card games at the tavern, Geralt's got plenty of killing to do. As with before, you'll have your silver sword for monsters and other fantastical creatures, and your steel sword for more mundane targets, like people. The fast paced and free form combat returns, with Geralt being able to quickly strike, dodge, toss a bomb, or fire off a magic spell. Proper manipulation and mastery of these systems means you can take on foes that are much stronger than you, especially if you track down what your target is weak to. It's a fun system that makes you feel like a seasoned fighter, and even felt fairly natural on controller baring an sporadic camera issue. 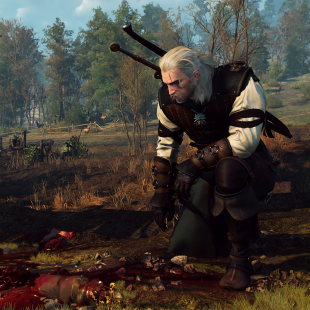 Any damage you take will need to be healed up, though most of the healing items appear to heal over time, not instantly, so you need to play well. You can also recover damage by meditating, but on harder difficulties you'll lose this option. One somewhat regrettable change involving meditating is a rework of potions. Geralt can still brew various bonus-granting potions, though a toxicity level keeps you from being able to barrel through any fight by drinking a magical cocktail, but potions can now be used instantly in combat, rather than something you need to prepare and ingest before the fight. While it does smooth over some tedium and flow issues, I personally always enjoyed the connection of gameplay and lore that witchers often win by being monster-hunting boy scouts, prepared for the worst, and that potions were so toxic that really only witchers could use them. With The Witcher 3: Wild Hunt being a multi-system release looking to hit a wider audience, it's not a surprising change.

All that said, CD Projekt Red still had to kick me off the PC when they needed to start tearing down at the end of the night. I even got into sections that I was especially warned that they hadn't polished yet. I was particularly enjoying getting to run around Skellige, an area of the Witcher world we haven't gotten to see yet, and it's filled with vikings and giant bears to punch, though that's more effective against the former than the later. There's a pretty awesome quest line involving all the jarls coming together to name a new king. If you've been a fan of the Witcher series, you might not agree with every change to the series, but it's still a fantastic world thats been opened up even more, and even if you've never played a Witcher game in your life, Wild Hunt does a pretty good job keeping it accessible, though you'll probably want to consult the menu to look up who certain people are. I couldn't stop playing Wild Hunt, and it made me want to go back an replay the last two in order to refresh myself, which I always take as a good sign for RPGs.