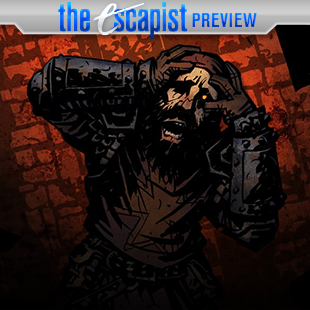 My first week at the hamlet went pretty well, all things considered.

The two starting heroes, a Crusader and a Highwayman, arrived at the town with only minor trouble from scattered bandits. Joined by a Vestal and Plague Doctor, they descended into the Ruins and slew every unholy monster in their path. The first quest was a resounding success, and the party returned to town with an overwhelming amount of treasure and supplies. Useful upgrades were made to local businesses, and for a moment, all seemed well. Perhaps reestablishing a foothold in this community would be easier than I hoped.

During the second week, my new party ran out of food and torches. Powerful monsters, encouraged by the thick darkness, swarmed the heroes at every turn. Tensions were high, and the party bickered constantly, except when they thought shadows looked like traps or enemy encounters. Sometimes they were right. Miraculously no one had died, thanks to the Vestal's healing abilities barely keeping everyone from death's door. But paranoia was setting in, and the heroes increasingly refused treatment in the thick of battle.

Eventually, one of the Highwaymen finally fell from a lucky blow before the Vestal could provide aid. The Vestal herself fell shortly after, struck down by a Bone Soldier. The remaining heroes knew the Ruins should be abandoned, but there were just a few more rooms to explore and the quest would be complete. I checked the map for a clear path and sent them forward, only to watch the Jester drop dead from starvation. The final Highwayman pushed on just a little further before collapsing as well, leaving his treasure in the dungeon with a cold corpse.

After Week 3, all of my characters were dead and the graveyard was filled with the bodies of two full adventuring parties. Thankfully I'd upgraded the recruitment coach so that four heroes could be transported into the estate every week, enough for a full team. Looking at the fresh faces of the latest batch of characters, I had one thought - If you all die this time, at least I know you'll be quickly replaced.

Darkest Dungeon is set in a ruined hamlet the player inherited from a distant, suicidal relative. Sometime before your arrival, the estate was infested by dark forces unleashed from an underground portal leading to some horrific eldritch realm. Your goal is simple: Clear the monsters from the hamlet's lands and restore the town to its former glory. That sounds easy enough for your typical RPG adventuring party - too bad it's far easier said than done. Your heroes are not steadfast fantasy warriors, but fallible humans whose mental health is just as important to maintain as physical well-being.