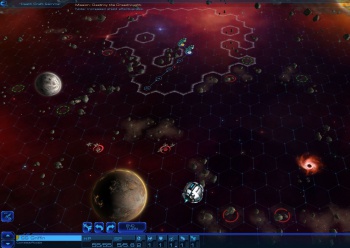 Civilization is kind of like Magic; amazingly fun, if you can ever figure out how to play the damn thing. Fortunately, Civ is getting its very own Duels of the Planeswalkers in Sid Meier's Starships. Like its magical counterpart, Starships distills Civilization down to its most essential components and strips out the layers of complexity that make Civ difficult for the uninitiated to grasp. Instead of the incredibly complex Tech Web from Beyond Earth, for example, you've got a dozen or so static research paths like "Nano Electronics," which improves the damage of your long-range lasers.

Despite its simplicity, Starships brings plenty of decision making and strategy to the fore with Diplomacy continuing to play a role in how your game pans out. You'll fight battles rather than wars, but you'll still be vying for galactic control when all is said and done, and Diplomacy will be a major factor there. The demo I got to play was only a few turns long, to be sure, so I can't speak to the longer term impact of diplomacy, but if you want to keep your early influence active, you'll want to avoid stirring up too much interplanetary trouble too early on.

Unlike the Civilization series, you're not building up cities in Starships, instead you're focusing on whole planets. When you establish influence over a planet, they'll start contributing resources to your cause, which you can bolster by constructing new buildings and cities on the planet. Wonders are still present in the game, though the impact on the earliest stages of gameplay were minimal at best. So, conceptually, it's a pseudo-4x game. What about the gameplay?

Gameplay is where Starships really shines, as the experience is simple, addictive, and fun. Your fleet of starships starts on your home planet, as one might expect, and you'll need to send it around the galaxy to perform simple combat tasks for your neighbors. If you succeed, they'll reward you with resources and loyalty. If you fail, they will snub you until you succeed. It's an amazingly simple approach to cultural conquest.

Rewards for missions can include any of the resources, a free tech upgrade, or a Battle Card, which gives you a random bonus in combat. In order to succeed at a mission, though, you'll need to have at least a loose grasp on how the combat works. Think XCOM in space. You'll do well to stick to cover, but instead of concrete walls and cars that explode in your face, you'll be hiding behind astroids and debris that float around the sector. Also, rather than missing your 25% shots, it seems to simply reduce the damage dealt, so you can pile on incremental damage to take down the most imposing enemies.

There are a variety of mission types, which is nice, though most of them still ultimately come down to "blow up the other ships," which is perfectly okay. Whether you're defending a base, guarding a portal, or just exploding the bad guys, the pseudo-tactical cover-based ship combat is fun and engaging. You'll automatically switch between short-range plasma cannons and long-range laser beams, but if you want to use the really cool abilities, you'll have to do that yourself.

Ships can be outfitted with cloaking devices, scanners to detect other cloaked ships, torpedoes, and even miniature fighter squads. Although I toyed around with cloaking and detection, the real fun was in the torpedoes and fighters. You'll launch a torpedo, for example, in the general direction of the enemy fleet. It can go a fairly long distance on any given turn, but then it stops and waits for the opponents to move. You can't explode it until the second turn, so you'll need to lead the enemies, but if they're just out of range, you can let it fly a bit further on before detonating it to take down the enemy squadron. Fighters operate just like another ship, but they have far fewer hit points to work with. If they take a hit from virtually anything, they'll die, but they can do some damage in the right circumstances, so they're not to be taken lightly.


After 3-4 combat missions, your crew will be fatigued and require "shore leave" to recover. This is how the resources are applied. It's basically your "next turn" button. You'll want to make very sure that you've built your extra cities and buildings before you take shore leave, though, because those are calculated before, not after your day of rest!


Resource management is mostly a means to the end of upgrading your ships. You'll collect resources from planets where you have sufficient influence, and you can increase the amount of a resource gathered. Once you've got the requisite energy, you can spend that to repair or upgrade components on your fleet. Each ship upgrades independently, so you can spread the love amongst multiple ships or just focus on making one unstoppable galactic murder machine.

I can't speak to how the late game holds up, as the demo only allowed for three full turns (two Shore Leave presses), but it certainly seems to have all the makings of an incredibly fun game. Time will tell, of course, but it's got enough potential to pique my curiosity.