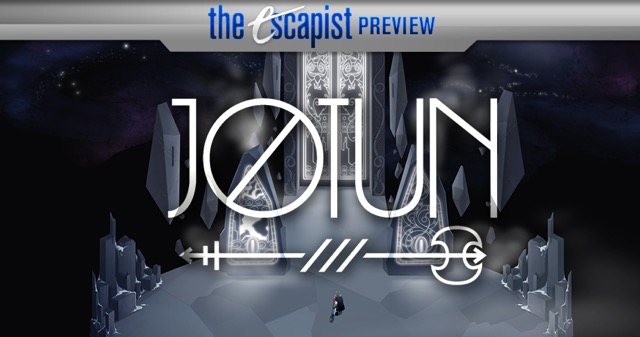 I enjoy advanced graphics as much as the next person, but it's truly impressive when games present a vast scope using simple resources. Jotun is proving to be a wonderful example. Its alpha only consists of four small levels, yet they present the feeling of an immense world. It only has two enemies - not enemy types, two enemies total - yet is an immensely challenging experience. And most importantly, it offers a vibrant world based on Viking mythology using cartoon animations and hands-off gameplay.

Jotun follows Thora, a female Viking who died an inglorious death. According to Viking beliefs, that bars Thora from Valhalla, but the gods are giving her another chance. To become worthy, Thora must impress the gods with a series of challenges across the realms of purgatory. In Jotun's preview, that means finding and defeating the Winter Jotun - a massive frost giant with incredible strength.

The game begins in a large grey environment with various symbols carved into the ground below me. Not certain of their meaning, I began exploring only to quickly find a cliff's edge. Below was an immense starry void - and I quickly released my surroundings were a small grey island floating in the black. Thora is a small Viking warrior alone among the stars, and my task was to find the items that would help her restore her glory. Following one of the void's path's, I found myself surrounded by mists - only to emerge in an icy wasteland. Fans of Viking mythology and Marvel's Thor will quickly recognize this as Nilfheim, home of the Frost Giants. 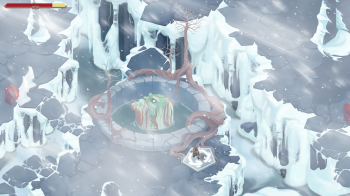 One of Jotun's few text prompts informed me I needed a pair of runes to unlock the Jotun's lair. Seemingly simple enough, I set out into the cold, and was promptly battered by a series of freezing winds. Before I knew it, half of my life bar was gone and there were no healing items in sight. I almost started rushing back to the void to catch my bearings until I spotted a tall stone outcropping. I rushed behind it to block the wind and spared Thora yet another inglorious death.

That's just the kind of game Jotun's is. It doesn't tell you anything about what to expect, it forces you to figure it out through pain and experience. Players need to use their heads to pick out environmental cues. I started noticing wind-blocking stones were covered in snow on one side. Paw prints on the ground provide clues on safe passage. And your only map are those floor carvings back in the void - which whenever I backtracked, I realized areas I'd visited became highlighted.

It's a hostile world, but beautifully designed and animated. Entering a new area may reveal a threat, or a gorgeous vista that embodies the scope of the world. Exploring might get you completely lost, or you may find a shrine to a god, or a glimpse of a magical wonder. On top of that, Jotun is entirely hand-drawn, so there's a great deal of personality in its presentation. It does a fantastic job of capturing the majesty and terror of Viking mythology, where you are a small speck in the show of powerful forces. 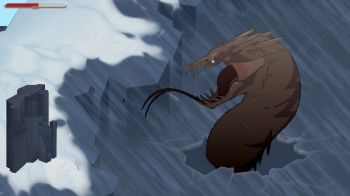 One of the best examples occurs when you face the serpent Jormungand. At one point, Thora needs to cross a frozen river, but as you walk on it, uncomfortably large shapes start moving beneath the surface. Eventually a shadow fills the screen as Jormungand rushes to the surface. No matter what I tried there was no way to dodge this attack with Thora's human abilities, which knocks out a significant chunk of health. Even with its animated style, walking across this river is absolutely nerve-wracking. But if you use your head, you can track down a path that gets you across with a minimum of serpent encounters.

Alternatively, you could turn to the gods themselves to enhance your abilities. Shrines to Thor and Freyja can be found in Nilfheim that unlock special abilities, like swift speed or a powerful hammer attack. You only have a limited number of charges that recharge with your health, but they give you significant advantages - the speed alone lets you rush to wind-protecting stones or dodge Jormungand's attacks. Even once you've gathered the runes, it encourages you to explore for a full range of abilities before confronting the Jotun himself. 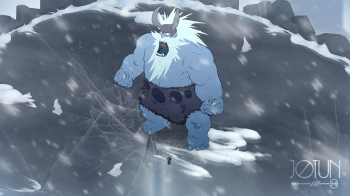 Speaking of which, the Jotun boss fight is far tougher than anything you'll encounter in the preceding levels. He's enormous, slow to defeat, and a single strike destroys a quarter of your health bar. After you finally dish out enough blows to graze him, he'll fall stunned to the ground - and crush Thora if she's standing too close. Simply predicting his moves isn't enough to win, you have to be perfect. Making more than two mistakes means you're close to death, and he'll turn the ground to ice at the halfway point, leaving you slipping around, trying to find traction.

The Jotun was absolutely the biggest challenge of this preview, and I died countless times trying to defeat him. But it's also immensely satisfying gameplay. Thora can dive under his legs, weave around attacks, and put up an impressive fight against this enemy of the gods. Being kicked back to the beginning of the match because I couldn't dodge his falling body was frustrating, but it was all worth it when - with barely a fraction of health left - I made the final blow and destroyed the Jotun once and for all. I actually cheered - this Frost Giant was the only enemy I attacked in this preview, but I'm going to remember that battle for quite some time.

And that's just Nilfheim. Jotun will include more regions of Viking purgatory, with even deadlier environments and bosses to overcome. If even half of the finished product is as solid as Jotun's preview, you'll absolutely feel worthy of Valhalla when you reach those gates.