I get a lot of codes from a lot of different companies for a lot of different games. It's one of the combo blessings/curses of the job. Getting hundreds of codes every year, I see a whole lot of weirdness, especially from the indie scene. Sometimes it works, but it's usually iffy at best. When I saw the description of Artifice Studios' Conflicks - Revolutionary Space Battles, it struck me immediately as an "iffy at best" situation. I've never been so happy to be so wrong in my life. 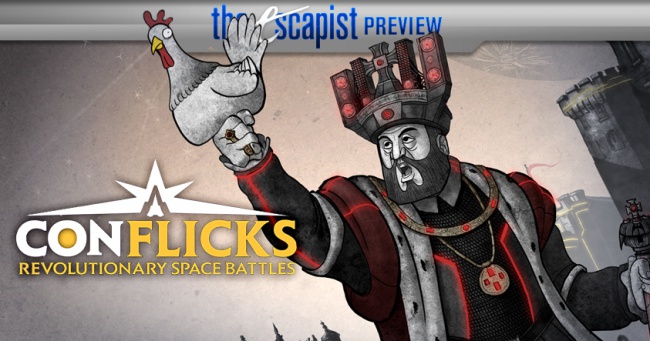 Don't get me wrong. Conflicks is weird as hell, but Artifice went all-in on the game's gimmick, and it genuinely works. Conflicks is set in an alternate history, where Leonardo da Vinci's greatest work isn't a portrait of a barely-smirking lady, but the discovery of a way to distill regular chicken egg yolks into the greatest material the universe has ever known; metamatter. Metamatter, it turns out, can power pretty much anything, from propulsion to weapons to forcefields, and was the innovation that brought on the space race a few hundred years early. If you know your history, you'll recognize most of the factions in Conflicks, because they are, for the most part, modeled on historical empires. The factions are, Greater Britain (I'll give you one guess); The Celestial Empire (modeled on French empire, and featuring space Musketeers!) ; Sacred Alliance (Spanish); and Sublime Gate (Ottomans). Rest assured, the chickens will have something to say, too!

Artifice wasn't content with just basing galactic empires on Renaissance era empires, instead bringing the entire Renaissance motif to space with them. Cinematics show spaceships rocking sails, long-distance communications are done via pipephone, and even much of the apparel is era appropriate. Even the chicken uprising mirrors the socio-political evolution of the era. From space-faring swashbucklers to revolutionary fowl, Artifice did virtually everything right with the tone and aesthetic of Conflicks.

Conflicks offers more than just a particularly entertaining gimmick, with a variety of RTS staples, blended with new concepts and mechanics. The basics are the same as virtually every RTS out there. Defend your base, harvest resources, find your enemies, and destroy them. Resources come from planets, which you populate with egg-producing hens via "chickforming" with a Henship, your resource collector. Your base is a Mothership, so you have some mobility, as well as a steady supply of new combat ships wherever you settle down. There are several types of ships with various functions, and each faction has its own unique twist on each of the ship types. For example, the scout unit for one faction has a Teleport ability, offering additional mobility, while another faction's scout has Spikes, which does additional damage on contact with another ship.

Combat is where Conflicks really stands out, though. Instead of the normal "make a million dudes and march them off to die" approach that amateurs like myself usually use in StarCraft and the like, combat requires far fewer units, and much more micromanagement. I'm not usually big on micromanagement on the scale of StarCraft, since you've got dozens to hundreds of units to deal with. Conflicks' combat system is much more manageable, and rarely requires managing more than a handful of units.

Almost every ship is equipped with some kind of projectile weapon, so you can just leave a wall of them in front of your Mothership to defend against assault. Engaging an enemy unit, however, requires repositioning, which is done with an Angry Birds mechanic, where you "flick" the ship, even though it's more of a slingshot than a flick. Pull back, release, and watch it go. You'll get a guide for the distance your ship will travel, but you'll usually have to judge direction for yourself. Ramming is one of my favorite tactics, as it gets you into range for regular weapons fire, does damage to the enemy ship, and, if you're not confident you can go toe-to-toe with weapon fire, you can often ram it with enough force to bounce it out of range.