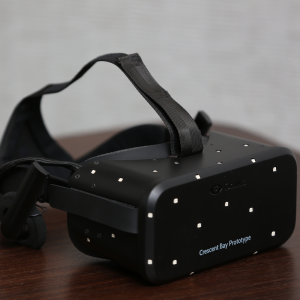 VR had a big showing at this year's Tokyo Game Show, with both Sony and Oculus showing off their latest toys.

VR is the new big "thing" to make waves at trade show in recent years, and Tokyo Game Show is no exception, with both Sony and Oculus showing up with their latest toys. Oculus had its new "Crescent Bay" prototype of the Rift, while Sony had its newly re-branded "PlayStation VR". I tried them both out, and see how they stacked up against each other.

Starting with the Rift, I was dismayed to discover that the Cresent Bay prototype still doesn't fix the "glasses problem" - IE: if you wear glasses, you have to stuff them inside the headset which can lead to a great deal of discomfort, as well as mess up your focus if your glasses happen to shift. That aside, almost everything else has improved from when I tried the Dev Kit 2 last year. I played a build of Eve: Valkyire - a kind of space dog-fighting game in the vein of Freelancer from the folks behind Eve: Online - and was super impressed with the 360 degree head tracking. There was no delay in my movements and the rendering of the screen, and it really made me feel like i was looking around in space.

The Crescent Bay comes with it's own built-in headset, and while some people will say "great! One less thing to buy" - who honestly owns a gaming rig and doesn't own a headset? It doesn't help that the built-in headphones feel cheap and don't sound as great as the stand-alone headphones Sony offered with it's own PlayStation VR.

The game worked well, but the graphics didn't exactly wow me and it really felt a lot more like a tech demo than an actual game. 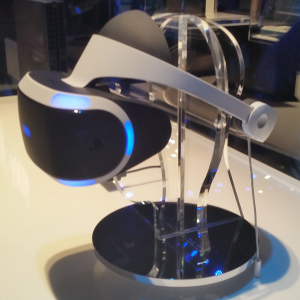 This is where Sony immediately scores its points. The game I played with PlayStation VR was a 3v3 multiplayer shooter called RIGS: Mechanized Combat League. It's set to be a proper, full-sized game that will launch alongside PlayStation VR, and only be playable with the headset. I was able to chat with senior designer Sam Dickinson, who told me that while the multiplayer portion is what's being showcased right now, it will have a fully fleshed-out single-player campaign.

RIGS is essentially a hyper-fast version of Mechwarrior, with the two teams of mechs trying to score "goals" by jumping through a hoop, as well as destroying each other. You can switch seamlessly between a speed, attack, and repair mode depending on your situation, as well as collect powerups in the map to activate an "ultimate" mode.

It's really, really fast, and herein lies the problem. PlayStation VR made me feel really sick to my stomach. I had only been playing for about five minutes when I had to just take the headset off and stop. I'm sure it was a combination of the fast nature of the game, the fact that the PS4 simply isn't powerful enough to render the games at a solid frame-rate, and the fact that PlayStation VR also suffers from the "glasses problem", but I just couldn't handle it, and I'm sure there will be a large portion of the population who will feel the same way. It's a shame because the game itself was actually really fun, and I wanted to keep playing.

On the plus side, the headset was considerably more comfortable than the Crescent Bay, and didn't feel quite as heavy.