I sat down to play a pre-alpha build of Total War: Warhammer with more than a little trepidation. I'd felt that way ever since the game was announced earlier this year. See, Games Workshop has blown up the classic Warhammer Fantasy setting, called "The Old World," in favor of a new fantasy game. That doesn't mean that setting is dead, though, clearly: Creative Assembly is making an entire Total War game based on it. And those don't come small - in fact, they tend to be of such an unwieldy scope they release with a passel of game busting bugs and exploits.

So, to the tabletop gamer in me, they're investing AA game creation on a dead, abandoned game setting. What I found was that Warhammer's Old World is very much alive, and Creative Assembly might be the ones to keep it that way.

The gameplay I got was a tactical battle featuring dwarfs and greenskins - in fact, it was essentially the scenario you can watch right there, plus a few more enemies, as I elected to play on hard mode. Because it was a scenario battle, a unique fight that happens in a specific place on the campaign map, the skirmis opened with a cinematic speech by the dwarf king, highlighting how reclaiming the lost underway tunnels was of incredible importance to the dwarfs.

With my hands on the game, I immediately set about futzing with the UI options and ruining the carefully designed pre-deployed battle formation, laying the preponderance of my heavy weapons on a hill to my right, then building up a strong center with a powerful flanking force and a few reserves. As befits the dwarfs of the Warhammer world, I had a serious technological advantage over the greenskins. Lines of Thunderers, musket-wielding dwarfs, and a few units of Cannon, with a front line lower down the hill provided by alchemical flamethrower wielding and nigh-invincible Gromril-armored Irondrakes. My solid center of dwarf infantry was backed up by units of crossbowmen, who have the advantage of being able to arc fire over allies, and anchored around a unit of Longbeards - dwarf veterans. Standing in reserve were my two Heroes: King Thorgrim Grudgebearer and a dwarf Thane, alongside a unit of berserking dwarf Slayers. 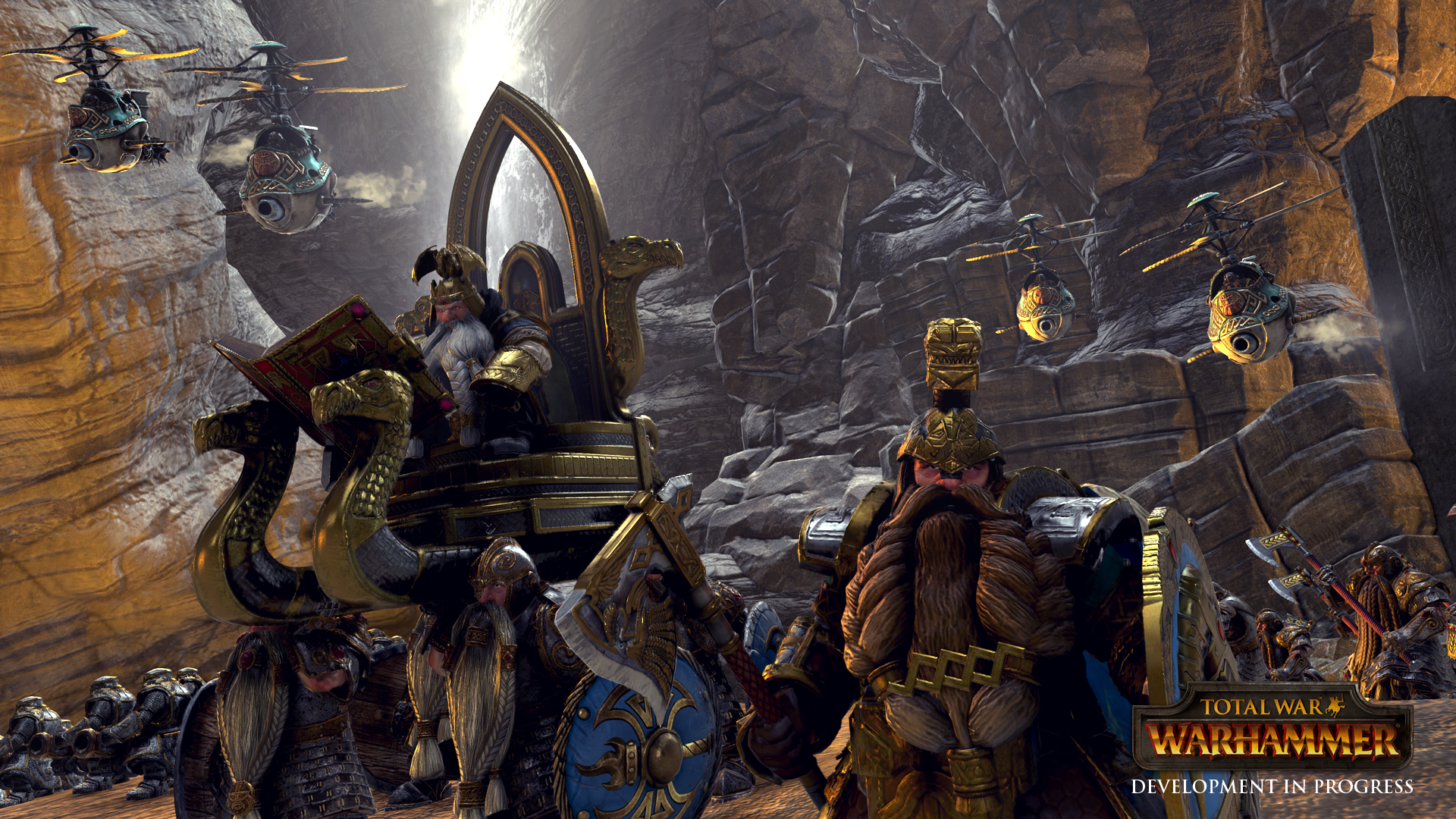 Speaking of technological advantages, the pre-alpha was remarkably stable and I encountered almost no bugs. It's clear that several recent games with the engine that they're using for Total War: Warhammer have given Creative Assembly a lot of experience with their tools, and a broad range of customization options to work with. The user interface has been set up with a lot of customizable options, including what auras, fields of fire, and orders are visible at what times. You can set things like fire arcs, general morale boosts, and standing orders to be always visible, invisible, or visible only while holding a particular key. You can go completely UI-less, in fact, for a wholly cinematic experience if you're an experienced player. The unit windows with descriptions of who the units are have been made quite a bit larger, though you can minimize or shrink them.

Scott Pitkethly, the game's lead programmer, explained why. "In the past we've been working with history: Most fans of a Total War type of game know what a pikeman is. They don't know what a Longbeard is - either they haven't played Warhammer before or the dwarfs aren't their faction." The expanded unit information window has details like armor, damage, and morale, but also includes descriptors and tooltips for unit traits or powers like armor piercing, fearless, or huge size. Tooltips were omnipresent, popping up after a short hover over nearly anything - which I loved.

As this was being explained to me, I had a huge horde of Goblins heading my way across the battlefield, a massive rectangular cavern beneath the earth. At the same time, a horde of angry Goblins came pouring over a bridge from off map, and moments later a crew of Goblins riding spiders flew out of a side tunnel and smashed into my flanks. I watched my right flank of heavy artillery decimate the goblin lines - routing them before they even reached me - but the swift-moving cavalry on the opposite crushed into the standard warriors I'd had there. "It feels a little faster than Rome 2 does," I said to Pitkethly. "Yes," he said, "we've tried to make the game its own unique experience" - but he declined to say anything as to precisely what small tweaks had been made. "All that's still not set in stone," he said, "remember, this is pre-Alpha."

After that, I spent a while screwing around with the game's speed controls: mostly slow motion. Tweaking everything into an incredibly slow speed let me see how the much more interesting animations that abound in this game play out. "Our animators have been having a lot of fun," said Pitkethly, "our animators, artists, writers, all love this game." It's obvious to me why, frankly. Liberated from history, even if stuck following the Warhammer look, you can see much more detail and inventiveness on display from the Total War team. Goblins on spiders leap over the first rank of enemies as they charge, dwarfs swing massive two-handed axes in a whirlwind through the enemy lines, and massive spiders send soldiers flying with a casual flick of the claw. Much of the animation wasn't polished at this stage, though, and the game still has that awkward problem past Total War titles have - combat between most units eventually devolves into tens of soldiers awkwardly sidling back and forth until a few kick off a combat animation. Even if the sword-swinging is far more interesting looking than usual.