Developed by Obsidian Entertainment. Published by My.com. Open beta released on Oct. 8, 2015. Available on PC. Access and statements were provided during a My.com press event at Hotel Irvine in Irvine, California. All travel and accommodation expenses were covered by My.com. 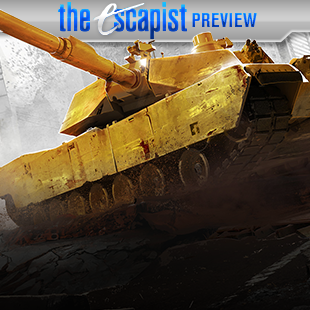 Armored Warfare was announced well over a year ago, but it's still strange to hear it's developed by Obsidian Entertainment. This is a studio recognized for its work in single-player RPGs like Pillars of Eternity, Fallout: New Vegas, and South Park: The Stick of Truth. How does one go from plot-focused RPGs to tank-based MMOs which leave little room for story?

Well, that's the thing: Armored Warfare has a plot, but one players can follow or ignore at their choosing. In-game text will eventually support a backstory which involves collapsing economies, dissolving nations, and the rise of private military contractors hoping to salvage something from the chaos. Not only that, Obsidian is currently enhancing its Player-Vs-Environment mode, offering more narrative gameplay options to players who aren't interested in competitive multiplayer.

In case you haven't played it, Armored Warfare is a free-to-play, open beta MMO centered around online tank battles. If you follow World of Tanks, you have a good idea of what to expect: Players choose vehicles, take part in epic battles, and earn resources which can be spent on new vehicles and upgrades. Where Armored Warfare stands out is its emphasis on modern hardware - Obsidian favors contemporary tanks and technology over the historical direction from World of Tanks.

Now you might assume this format lends itself to large-scale, PVP battles. And that's certainly true - driving into Armored Warfare's brief but intense 15-tank battles is immensely satisfying. But when Obsidian launched the game, it included PVE maps to ease players into mechanics. These levels were cooperative missions where five-player teams fought AI opponents and worked together to complete objectives. While crunching play statistics, Obsidian made an interesting discovery: 30% of players favored these cooperative matches.

With the new information in hand, Obsidian has been rebuilding Armored Warfare with a stronger emphasis on PVE gameplay. The finished game will include a broader range of cooperative maps, each offering primary objectives and randomly assigned secondary goals. For example, the newly revealed "Operation: Cerberus" mission sends players into battle with bosses closing in on a stopped train, while secondary goals could involve capturing nearby bases or destroying enemy supplies.

That's not to say PVP isn't supported as well - competitive players still have access to new maps and content. Instead, Armored Warfare's rewards system is being retuned so players can unlock similar benefits from each game mode. If handled correctly, that's a huge boon to gamers who prefer cooperative experiences over PVP competition. 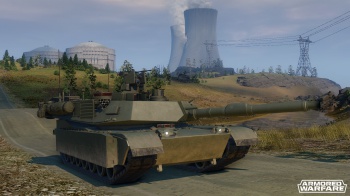 Outside of PVE, Armored Warfare will also introduce story elements unique to most games in the genre. These elements are still under development, so Obsidian was fairly quiet on details. But the studio confirmed Armored Warfare has a backstory, complete with a near-future timeline addressing the context of its tank battles. "It will be a lot of backstory and setting," Rob Nesler, Armored Warfare's art director explained. "We have Commanders and Dealers who are real characters in the game. We expect that there will be bios and interactions between these Commanders who are more aligned to a Dealer, and a Dealer [will have] an opinion about a Commander. Those kind of things will be unlocked as you proceed through the game."

That being said, Armored Warfare certainly won't be the narrative RPG experience you expect from Obsidian. Representatives from the press event joked that the finished game won't contain dialogue trees or "tank romance". Enhanced narrative options are being considered, but they're far more likely to take a backseat to MMO gameplay.

"It's been walking a fine line between throwing too much story at people who don't necessarily want to have that stuff, but still having it be available for players," Obsidian senior designer Charles Staples explained. "I think the PVE experience is a good way for us to maybe put more of that narrative spin on things... and that's something we're investigating."

What kind of narrative touches might Armored Warfare's PVE mode use? Well, NPC handlers already provide updates on objectives as you progress in-game. Scripted events like distant explosions or crashing helicopters occur as certain levels open. And once Obsidian's current goals are complete, the PVE mode is flexible enough to experiment with features that wouldn't work in PVP - such as enemy encounters with AI helicopters or other non-tank vehicles.

Sure, it's not a story campaign, but there's great potential when blending Obsidian's worldbuilding with MMO arcade-style action. That's an approach rarely seen in the genre, and one which might just attract new players to Armored Warfare as it nears its final release.