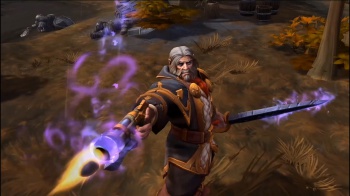 At BlizzCon 2015, Blizzard revealed what content Heroes of the Storm players can look forward to, and we got some hands-on time with a new map and three new heroes.

Players have been requesting an "ARAM" style of game mode for some time, and Blizzard plans to introduce its own version of League of Legends' All Random All Mid with "The Arena." The Arena is a simplified game mode that will feature multiple smaller maps and focus on fast matches. Further, teams can be entirely randomized, and there is no restriction on how many players can end up with the same hero. Players get to choose one Heroic ability, then jump into the fray.

Blizzard also revealed three new heroes: Greymane the Worgen, who shapeshifts into a werewolf; Lunara the Dryad, a centaur-like creature for those unfamiliar with Warcraft lore; and Cho'gall, a two-headed ogre with possibly the greatest gimmick of any hero in a game known for its great gimmicks: two players control Cho'gall simultaneously.

Cho'gall is a unique hero for another reason: he cannot be purchased with gold or real money - not until his initial release event completes, at least. Instead, he will spread through the community like a virus. Everyone with a BlizzCon ticket, virtual or otherwise, will receive Cho'gall for free, as will a small number of random lucky players. For everyone else, they'll need to win two games in a party with someone who has Cho'gall in order to unlock him. Cho'gall owners who win four games in a party with people who don't own the ogre will be rewarded with gold for spreading the "Cho'gall virus."

Lastly, a new map called "Towers of Doom" is coming. Its gimmick? You must destroy enemy forts in order to capture them and turn them into forts under your team's control. Playing on this map left me feeling underwhelmed - it is currently my least favorite map in the game. It plays completely differently from other maps because you are unable to attack the enemy core directly - instead, you must capture a periodically spawning objective to deal damage to the enemy core, and the number of forts your team controls will determine how much damage is dealt. The big issue I had was that it felt trivially easy to capture a fort, or lose a captured fort, resulting in both teams just roaming and capturing forts with no real net gain or loss to either side. Further, it feels less exciting to have to rely entirely on a map objective to win - in Blackheart's Bay, for instance, the cannons deal huge damage, but you are still able to attack the core yourself. (Disclosure: we could only play vs. Elite AI and not human opponents.)

It was also confirmed that Overwatch's Tracer will be an upcoming hero, but no details on when that may happen were provided.

At a later panel, Blizzard discussed the three new heroes a little more in-depth. Lunara is a fragile ranged assassin focused on long-range poking and kiting. She has high mobility, uses poisons and slows, and her E is a pure utility ability that summons a wisp that grants vision. After trying her out, I did enjoy the direction of this character and felt relatively powerful enough, though it did take some getting used to her movement: rather than a mount, she simply moves faster than all other heroes through a staggered, bounding gait.

Greymane is a combination of ranged and melee assassin. His human ranged form focuses on wearing the enemy down before moving in for the kill in worgen form. His shapeshift is handled with his E; when in human form, the E serves as a closer, bringing him to the enemy and into worgen form. As a worgen, the E serves as a disengage that creates distance and returns him to human form. My experience playing him was quite enjoyable - the mix of playstyle felt fun and engaging, forcing tactical decisions over when it's best to be in which form. Balance-wise, he felt about on point in my limited testing.

Cho'gall is both a melee warrior and a ranged assassin, with Cho being the former and Gall the latter. Cho controls the movement of the ogre and its basic attack, with a minor kit of warrior powers that don't hit hard but can be a nuisance. Gall brings the damage, with low-cooldown abilities to keep the player engaged, and the two heads have a combination attack that requires maximum coordination. By pressing E, Cho tosses out a bomb, and Gall must then press E to detonate the bomb once it is in range of opponents. I got to playtest as Gall, with fellow writer Mitchell Saltzman seated beside me as Cho, and I must say that communication is key. Playing Cho'gall in a public game, without voice chat, must be a nightmare. However, I did enjoy myself as Gall, though I feel he may be better classified as a specialist than as an assassin. Mitch seemed somewhat bored playing as Cho.

Overall, however, apart from some disappointment with the new map, the content coming to Heroes of the Storm looks great, and I cannot wait to try out The Arena.

Related to:
cj miozziblizzconblizzcon 2015heroes of the stormpcpreviewvideo games
0
Tweet