I got the chance to play an early access build of Ashes of the Singularity by Stardock. The game uses DirectX 12 on Windows 10, providing a more balanced workload to all your computer cores. My goal was to see if this real time strategy game had potential in its raw form, which I saw along with so much more in my playthrough. 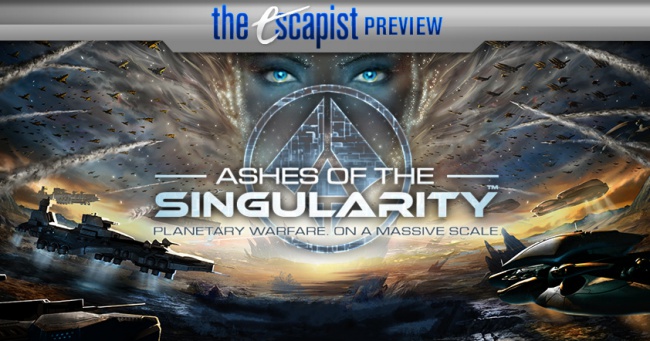 Ashes of the Singularity lends vibes from classic RTS games like Supreme Commander and StarCraft. The aim in this Ashes of the Singularity early access build was total domination. There's the traditional approach of annihilating your enemy's base. But alongside that, you can dominate map landmarks and generate victory points instead. Hyperfocusing on building an impenetrable base isn't the best option in this game. By the time you build your Fort Knox, the other teams will have captured the map landmarks. The enemy can ignore you completely and still win by generating enough victory points. Map sizes accommodate 2 to 6 factions at a time, and to a beginner "scrub" like myself, it was already a handful having to deal with just 1 enemy, and so competing against five other teams unleashes a chaotic war. Given the amount of landmarks on the map, more often than not there's always a battle going on.

The only playable faction in this build was the "Post Human Coalition." Ground units are the basic grunt soldier class, they have to navigate the hills and valleys of the map terrain. Air units can fly over obstacles with ease, they fly over ground defenses and go on bombing campaigns deep behind enemy lines. Dreadnoughts are the tank units, they take a long time to build but deliver the highest damage while being able to withstand massive enemy fire. On top of different mobile units, you can build stationary defenses. Anti-air guns, turrets, and drones. A few of these in well placed positions could turn the tide of battle on their own. Ashes of the Singularity has a solid unit balance, and as it is currently, new players have the chance to stand up against difficult challenges.

There are seven different difficulty levels of AI - ranging from "Beginner" to "Insane." Stardock claimed that units will target enemies based on line of sight. During the game, I was able to verify this myself. My units started shooting into an area of the map beyond my own view. It turns out they were saving themselves from an ambush I didn't see coming on the fog of war view I had.

The sound design needed some work, as well as the UI. Sometimes it didn't register my mouse clicking on a menu option. The Ashes of the Singularity alpha had video options expected from a finished product . The standard resolution adjustments, shadow textures, antialiasing, and VSync are all there. But there's also the capability to toggle shading samples, point light quality, and glare. Seeing the attention to graphics details in the options was impressive.

The graphics of Ashes of the Singularity are no pushover. Your computer hardware will go to war with the demands the game makes of your system. 8 GB of RAM is the minimum required, but they recommend a whopping 16 GB RAM. A Nvidia GTX 970 or AMD R9 390 video card is also needed to pull off the higher graphics settings. As you can imagine, this game is by default a 64-bit program. Ashes of the Singularity looks at 32-bit and laughs in its face.

I reached out to Stardock to ask about their future plans for updates:

"So right now we're in pre-beta. The main purpose was to make sure all this new tech was going to work in the wild. The good news, it does. DirectX 12 is working great and so is the multi-core AI. Next up is Beta 1 which we call "Benchmark II" because it includes a revamped benchmark for DirectX 12. That beta will introduce a bunch of new features into the game such as global abilities and orbital structures. The purpose of those features is to allow the player to have more tools at their disposal to execute their strategy. In January we will be releasing the second race called The Substrate. They operate on a different technology basis than the first faction (they both function and look different). The other big feature coming up is called the Ascension War which is where players compete in a galaxy-wide meta game to try to add as many worlds into their empire as possible."

Ashes of the Singularity, even in raw early access form, shows a lot of potential. The current state of the game is suitable for dedicated RTS fans who enjoy the genre. Managing entire armies of forces into chaos gives a sense of massive scale that manages to put you in awe. As Stardock's future plans going forward will add more maps and factions, it will push this decent RTS war game to thrilling new heights.

Stardock released Ashes of the Singularity to Steam Early Access on October 22 for $49.99. But until November 5th you can pick it at a discounted $39.99 price.

Check out the Early Access walkthrough straight from Stardock for a detailed look at how to get started in total domination.