Oh, the homing missiles. Valkyrie's most novel and interesting use of its virtual reality component is in using your weapons. You target missiles visually, holding down the trigger and tracking an opponent with your head. The longer you track, the more missiles are racked and locked, until you either break visual hold or get to your maximum firing complement. When you release, they run your target down, giving them a handful of seconds to deploy limited countermeasures or, more likely, suffer a crippling hit. It's a system Willens calls "look to lock."

Heavy ships' primary armament uses VR too, letting you grit your teeth and stare enemies to death. It's a set of gimballed cannons that point where you're looking, giving you freedom to track your targets while simultaneously maneuvering your ship elsewhere. That's good, since Heavies are terribly slow and turn like a brick - they trade maneuverability and weapon variety for armor. Heavies rely on their secondary power, a chargeable warp-speed boost, not a weapon, to escape or enter combat. Either escape or enter, though - the boost takes a while to charge up, then to recharge. When you get into the fight, you track targets with your head, and a leading indicator lets you know where to look so your shells impact near whomever you're looking at.

I tried two variants of the Heavy, one a rapid-firing beast called the Maelstrom with slow shells that exploded on proximity to a target or at maximum range. They didn't do much damage alone, but devastated light enemies who got caught in a full barrage. A Maelstrom-on-Maelstrom fight was boring, if hilarious - like two elephants going at it with blunt knives. The other was weird beast which had a very slow firing flak cannon. The flak projectile itself was fast, exploding into a starburst of eight or so smaller munitions that each then flew off and exploded under the same rules: At their max range or on proximity to enemies. They were shockingly powerful, but compared to the game's other weapons incredibly slow, firing only every two or so seconds compared to the tens of times a second most others sported. 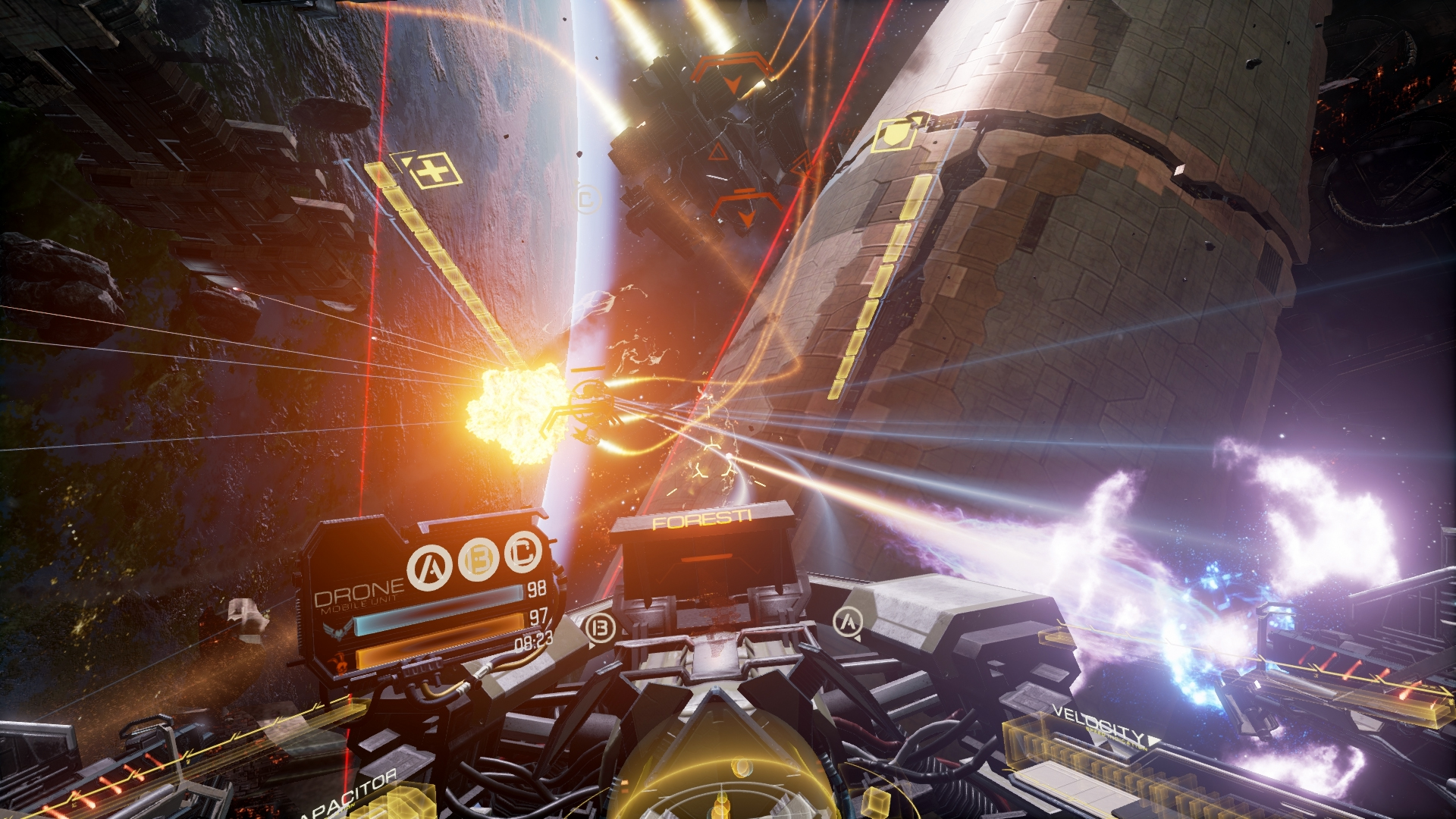 It was a whole new skill for me, and it's not often you find one of those if you've been a lifelong gamer. In a combat I only had one, maybe two, shots that would count before my nimbler opponents skipped out of sight. I had to track very precisely with my head, ensuring precision so that my lead was just right and one or more submunitions would get the target and deal a devastating blow. While doing that, I had to keep my ship on course to stay in the fight and get me those precious seconds. Then I'd have to take stock of the situation again, deciding if a shot placed to explode in the middle of combat was best, or if I should try to get another split-second chance at a direct hit. All the while, I was a sort of tank for my team, my larger ship and flashy fireworks attracting more enemies, who tried to get on my tail, which made it harder to stay the center of the swirling knot that most Valkyrie combats become.

Oh, and remember, if you're watching your opponents you're not watching your health, shields, boost capacitor, or anti-missile countermeasures timer. Most ships' primary weapons aren't visually controlled though, just their secondaries. For example, the Fighter ships' main arsenal is fixed prow gatling guns with an always-visible reticle. The missile reticle only appears when you try to target them.

Valkyrie's biggest skill is probably remembering not to develop tunnel vision. You'd think that the red blinking lights, sirens, and flashing missile outlines would be enough to help you know when there's incoming ordnance... but when you're in the thick of things, you tune out every distraction. Some players won't like that. They'll find it frustrating, finding themselves constantly wondering why they died or what killed them, and how they could have improved, only to respawn and have the same thing happen again. I certainly saw others having that problem, and had it myself when trying out weaker ships. The final version of the game would do well to try and solve that problem - information will be key to learning in such a fast paced environment.

In the end, though Heavies were fun, they didn't suit me. The extreme durability felt like cheating compared to the fragility of other ships, and the rapid-firing heavy variants were more spray-and-pray than the precision-based combat I enjoy. 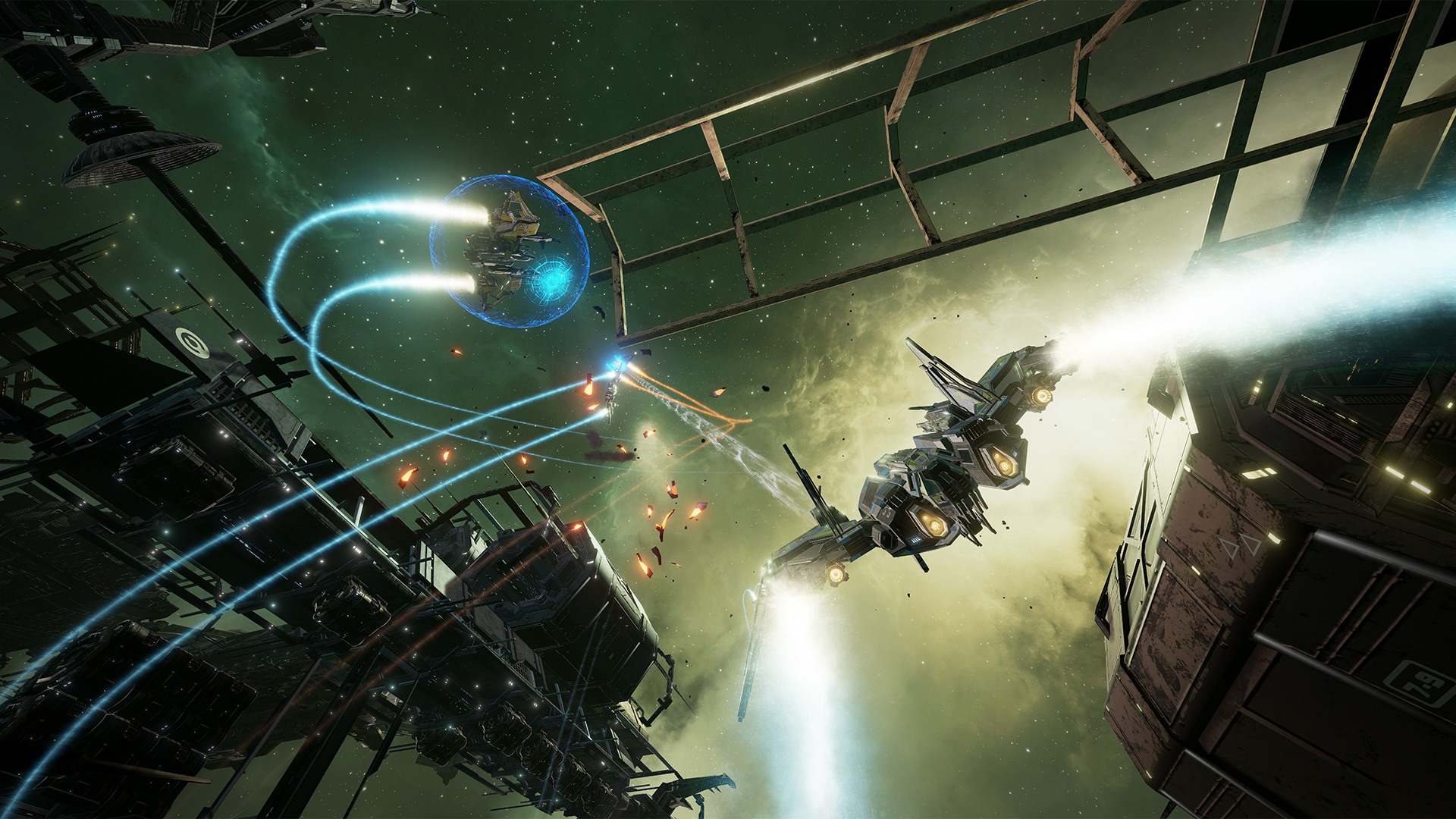 No, where I had the most fun was in the Support class ships, and in a hybrid Support-Fighter ship. They were oddly shaped, tall and narrow, with the cockpit at the top. I could idle in a chasm or corridor with just the barest bit of my ship exposed. That let me look around easily in VR, only a little of my ship obscuring the stars, exposing opponents coming from most angles. Enemies are highlighted with a little red box, but that doesn't give any indication of how far away they are. Since only a bit of my ship was exposed, I looked like a bit of the terrain, or that my ship was on the other side of the terrain camping a checkpoint. When enemies close and blasted past I'd lock on, dart out, and be on their tail in no time.

See, supports and support hybrids use a visually aimed and locked beam laser. After a few seconds of holding the trigger on the target you're looking at it starts up, rapidly draining their shields with a flashy twisting beam - or refilling their shields if it's a friendly ship. Supports were also the fastest and nimblest of the ship classes, if the most fragile, and in contrast to most games also seemed to fulfill the role of quick, sneaky scout. They have to be. Their beam laser was the most finicky weapon in the game. Beyond requiring visual lock followed by a charge up time, they had limited range and a very limited arc of fire - a frontal cone. If you lost sight of your target, you lost both the lock and the effects of your gun.

Some supports also carried spider bots, which threw out a stationary web of laser lights very bright to allies and dim to foes. If an enemy ship flies through it, the spider bots land all over their cockpit screen (in a terrifying and disconcerting visual effect for a VR game), then explode in an EMP which cripples their systems briefly. If an ally flies in, the bots land on them to supercharge their shields.