Despite Supports' cool shape and clever tricks, I eventually settled on a hybrid Fighter-class, which was lightweight, fast, and used a mix of styles. On one hand it had the support's secondary weapon, the healing beam, but used the fighter craft's standard primary double gatling gun weapons. I loved zipping around the battlefield, targeting the allied ships my UI flagged as having damaged shields for healing, then scoring kill assists with my main guns. When not playing medic, I could use my superior speed and support-like maneuverability to dart in behind enemies and suck their shields right off. Even if they managed to shake my tail, they were left shieldless, an easy kill for myself or a teammate.

That big, flashy beam laser sure does make you a target though. 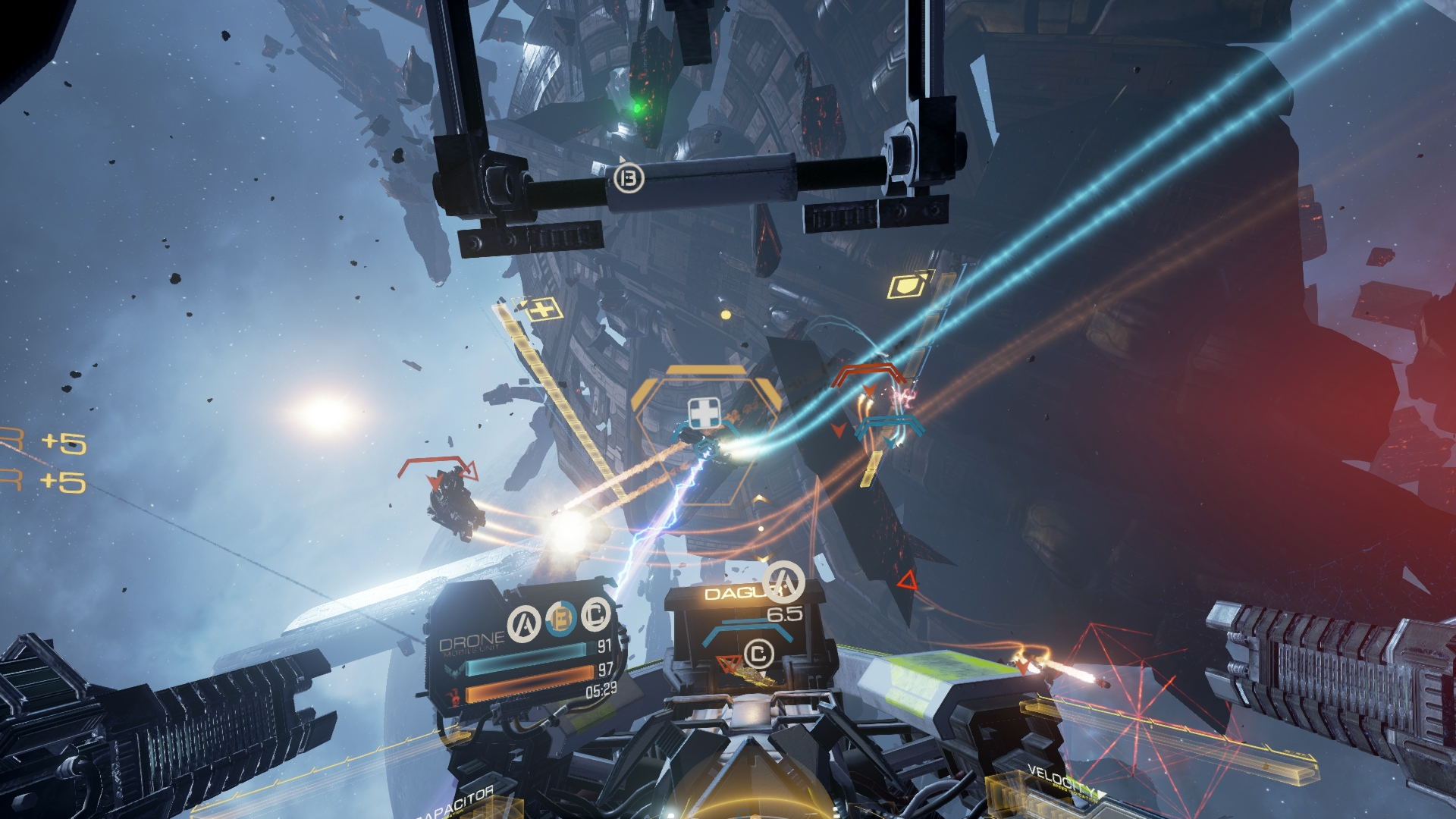 According to Willens, settling into one playstyle is an option, but you're intended to do more. "You play more, you get more launch tubes. You take a wider variety of ships into combat," he said. That mostly bore out in play, for better or worse. We had most of the game's options unlocked for us, so we could go into combat with four ships to choose from. With small, five person teams, composition is pretty important. Stubbornly sticking to one ship type, even if your opponents counter it, will get your team killed. If nobody on your team wants to play support, you'll lose by attrition in an equal-skill match. A team wholly composed of heavies might be fun, but your opponents will always choose where the fight starts and you'd have a lot of trouble aiding allies. A lone wolf can and will devastate one or two uncoordinated enemies, but if you fly solo for too long you'll get caught out and scrapped in seconds. In the end, a diverse lineup of weapon combinations available will be what keeps Valkyrie alive post-release. There was a lot in the build of the game we had access to, and at least ten ships that I counted weren't available to us, but I couldn't get a good sense of how different every ship variant was from the other. Some Supports, for example, seemed nearly identical after a round out. The heavies I tried all had big, obvious differences.

From the menu on, EVE Valkyrie plays like a game designed for the VR environment. "There's a few immutable laws of development," said Willens, "and one of them is that in VR you need a reticle. A point of focus so that the user knows what they're looking at. We broke that law. Of course people know what they're looking at. They're looking at it." It's something I noticed right off the bat. When you load into the game you're seated facing a projection overlaid on a starry dome, an open view of space. In an odd moment of meta-irony, overlaid on the dome are holographic virtual reality icons. A flock of ships lets you customize your spacecraft. A carrier orbiting a world lets you jump into combat. Looking down, there's symbols for changing game settings, or your user login - right where you think they'd be, on your throne's control panels. When you look at something it reacts dynamically, and a button press activates it. It's a visually impressive trick because it's unlike other games. Willens likened it to a planetarium. "We wanted it to be something special," he said, "because menus are part of the real world. This is supposed to be an immersive experience. You don't want to start this up and see a bunch of logos, then some names, then some basic buttons you scroll through with a stick to select."

It's when you look behind yourself, or to the sides, that the real cleverness of the menu breaks in. You're sitting in the grungy pilots' ready room of your carrier. Behind you is a bar, makeshift neon sign glowing, littered with half-finished drinks. To either side an armored glass viewport shows glimpses of the fleet beyond. A few crates of equipment and storage lockers must belong to your wingmates. Airlocks lead to other ship sections. They're grungy, human touches. 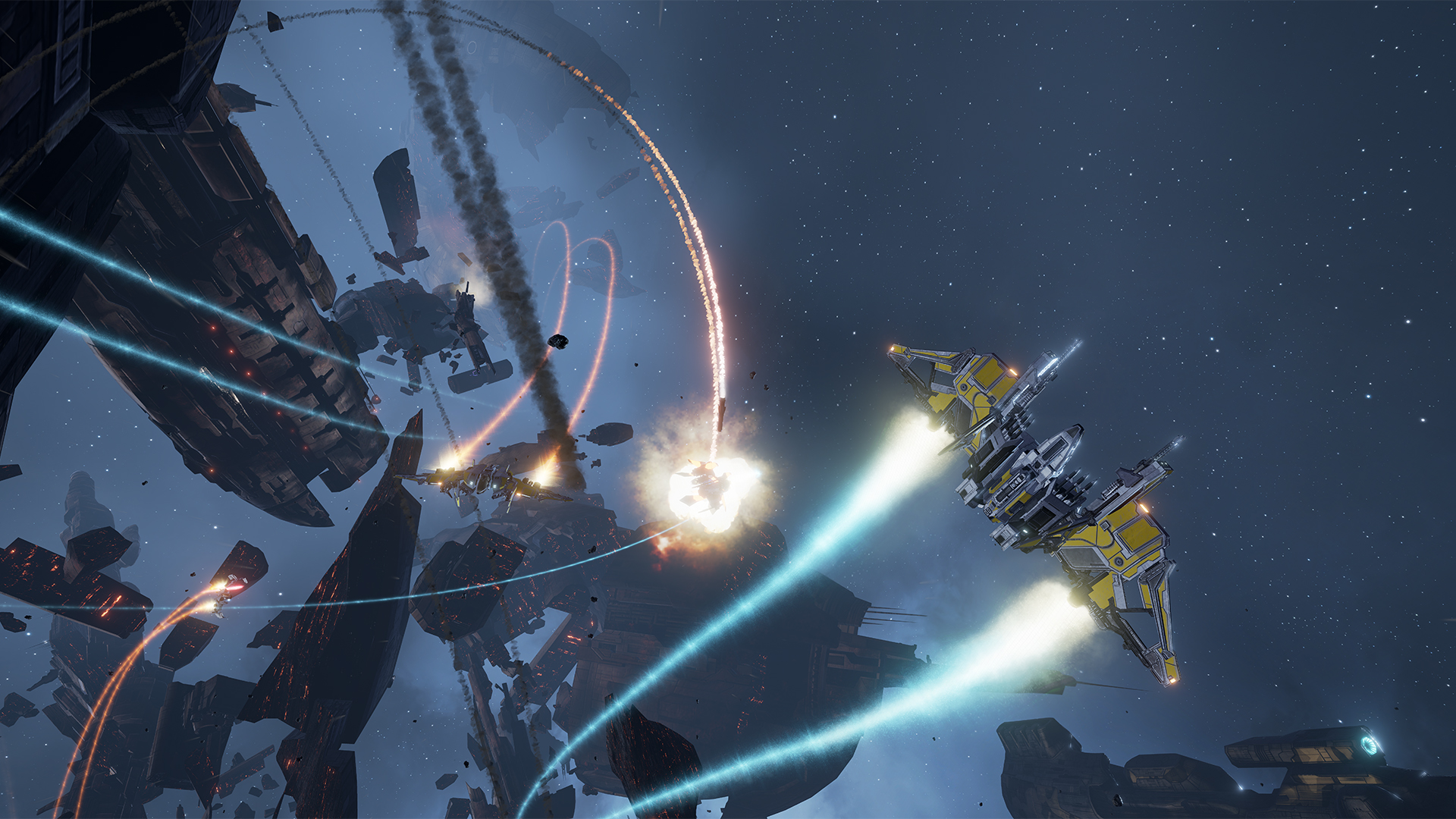 The build I played was a multiplayer environment, five-on-five skirmishes of games and tech writers running on a LAN setup.[1] The developers put us through four rounds of gameplay, each about 10 to 15 minutes long. We played two standard team deathmatches, focusing on killing through enemies' allotment of cloned respawns before they killed through ours. The other two games we played were control point based capture maps, which while they weren't finalized, gave every ship the ability to drop drones near capture points. The dropped drones converted the points to your side and caused opponents' tickets to drop, and you could destroy enemy drones to stop their conversion and capture of points. I got a lot of enjoyment out of that, spending most of my time healing allies and sniping enemy drones to prevent their progress - even if that meant my score sucked. It was a fairly standard twist on the format, but fun nonetheless.

Valkyrie promises to ship with those PvP modes and a few others, alongside a set of PvE environments. Swarm will be a wave-based defense where players fight increasingly large waves of artificial intelligence opponents. Convoy will be a mission-like environment where players undertake fixed objectives against AI fighters. "We don't call it a campaign because campaign has connotations - people think this grand thing like Call of Duty - they're more a less competitive, fun way to test your ship builds and learn the game." If you just want to fly, a mode called Scout will be available to just explore the maps and find little points of lore. It's a decent lineup, but if too few maps make it into the game there could the lack of content variety that has plagued recent titles like Titanfall and Evolve. It's too early to tell. Launch is some time out and CCP isn't nearly ready to discuss final specifics.

I do not often unironically use the phrase "get hype," but, perhaps just this once, I'll go ahead and board the hype train at an early station. Aside from my prior comments, I see little that could happen in the next months of development to make Valkyrie go wrong - but we'll keep checking in nonetheless. EVE Valkyrie will launch in 2016 on PC and PS4 using Oculus Rift and PS VR respectively.