Ghost in the Shell is always a franchise I'll have some fondness for. Not only was it the first full-length anime film I'd ever seen, but its unique cyberpunk world was beautiful, enthralling, and a little terrifying all at the same time. So I completely understand if some fans are skeptical of First Assault, a free-to-play multiplayer game based on Stand Alone Complex. How do you adapt such a rich universe into an online shooter without so much as a single-player campaign? While First Assault might not be the Stand Alone Complex video game story we hoped for, it still does something of value - mixing up your typical multiplayer match with Ghost in the Shell's cybernetic technology. 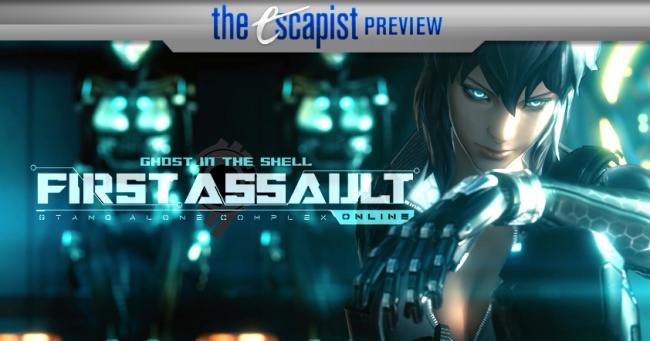 For those not familiar, Ghost in the Shell Stand: Stand Alone Complex is set in a cyberpunk Japan during the year 2030, when humans augment themselves with futuristic prosthetics. The series follows Public Security Section 9, a government counter-terrorism agency which often finds itself investigating the cutting edge of cyber crime. First Assault, meanwhile, is a free-to-play online shooter where Major Motoko Kusanagi and other Section 9 operatives face enemies from various Stand Alone Complex storylines. 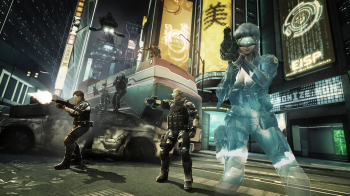 After logging in, the first thing to do is unlock your main character. A robust selection from the anime is available here, including Major Kusanagi, Batou, Togusa, Ishikawa, and many others. Each personality comes with a unique cybernetic skill to activate on the battlefield. Kusanagi has Thermo-Optic camouflage, rendering her almost completely invisible to other players. Borma uses a nano-gel armor that increases armor and HP over time. Togusa can release hunter drones which track enemies and explode on contact. You may have trouble choosing a preferred skill, but don't worry too much - other characters can be accessed by leveling up or purchasing in-game unlocks.

You might be wondering, how does First Assault handle opposing teams when everyone is a Section 9 agent? Simple: Make each team believe they are Section 9, but the enemy is not. Each level is loosely based on Stand Alone Complex episodes, covering terrorist attacks and enemy engagements. Both teams take the role of Section 9, but opponent skins are altered to appear as enemies from your chosen episode. One Deathmatch might pit you against cybernetic soldiers, while the next has you facing human terrorists. It's a nice touch that helps you quickly spot your opponents while grounding the battle in Ghost in the Shell lore. That said, you'll still have multiple Kusanagi's and Batou's on your own team, but it's not that distracting once the shooting actually starts.

First Assault also goes a long way towards capturing Stand Alone Complex's aesthetics. Each match opens with a familiar digital map view that quickly zooms down to your character. Director Aramaki will periodically appear on the intercom to discuss your team's progress. But the most stark details are in your actual robot bodies. Kusanagi's deaths don't simply knock her ragdoll over - they make her cyborg shell explode into various robotic parts. It's a minor detail, but one that truly reinforces that you're playing Ghost in the Shell, and not some other multiplayer shooter with anime cyberpunk skins.

As for gameplay itself, the matches are fairly typical multiplayer shooter fare - at least on the surface. During our press event, we played a Team Deathmatch, Terminal Conquest (a Control Point capture mode), and Demolition (bomb-planting missions straight out of Counter-Strike). The difference is First Assault clearly in the Ghost in the Shell Stand Alone Complex universe, where cyberpunk elements are highly prominent. The skills of each Section 9 character opens a new range of tactical options beyond the "find cover/flank/advance" approaches typical to other games. 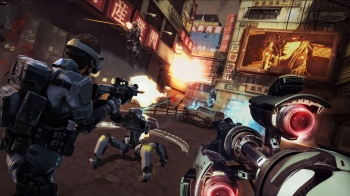 I spent my playtime as Major Kusanagi, whose Thermo-Optic Camo makes her an obvious stealth expert. As long as you're not firing your weapons, and careful in your movements, you can sneak past unsuspecting enemies - or make the first strike before they're even aware you're there. You can even still contribute to capturing control points when your invisibility is activated, making you harder to spot when the enemy tries to retake the position. It can also be helpful when slipping past defending positions, such as when you're trying to plant a bomb in First Assault's Demolition mode.

And that's just Kusanagi - other characters have their own benefits. I would often find Ishikawa's machine-gun toting Cyber Sentry defending control points, preventing our entire team from getting close enough to recapture it. Saito's Heat Sensor allows players to see enemies through walls, making it far easier to prepare for their attacks. Then you have Batou, with a hidden missile launcher in his arm that makes short work of anything in his path. And that's not getting into the range of weapons available from the in-game market, letting you develop a custom load-out that reflects your cyber skill and particular play style.

That's great for individual players, but the truly special touch is that skills can be shared. Each skill slowly recharges to two tiered levels. Each Tier 2 skill is more powerful, but some skills also provide your Tier 1 skill to any nearby player. For example, Motoko's Thermo-Optic camouflage could render the entire team invisible, while Saito's Heat Sensor lets everyone spot hidden enemies. It really encourages players to work together and find skill combinations that provide maximum benefit - you could potentially have invisible, hyper-sprinting operatives with nano-gel armor rushing into battle if everyone coordinates their skills at the right time.

While First Assault is not the Stand Alone Complex game I imagined, it's certainly a promising shooter - and that's only based on the Early Access version I played. Nexon has plans for new locations, game modes, and unlockable weapons which will be available to all free players at a future date. In fact, First Assault's Early Access version has no in-game monetization - and once added, it will only provides faster unlocks and cosmetic character skins. So whether you're a long time Ghost in the Shell fan, or just someone looking for a new free-to-play shooter, now's a great time to see if First Assault is your kind of game.