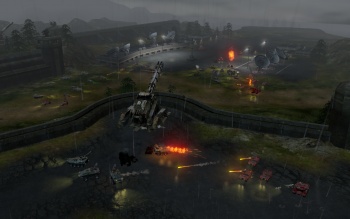 From what we saw of Magadan, End of Nations is essentially an MMOG that controls and plays like an RTS - instead of one character, you're controlling a group of vehicles from a top-down perspective. There were relatively safe havens like heavily guarded towns where a player could rest, repair and recuperate, there were wandering Order patrols out in the wilderness, and there were quests and enemy strongholds. One particular quest we saw tasked the player with assaulting an Order missile base in order to stop a rocket launch, then reprogramming the rocket to work against the Order instead.

The action bar that would be filled with skills and spells in a normal MMOG was mapped to "commander abilities," that gave Morris the ability to do things like call in airstrikes or use smoke screens to conceal his movement. Another MMOG hallmark was, of course, the presence of boss battles: We saw a group of players attacking a "baby Panzer Hulk," one that was still under construction. Even in an unfinished state, it was a formidable foe, with missile turrets and EMP cannons all needing to be destroyed first.

With the presence of boss battles, of course, comes another MMOG staple: loot. As Morris and Jirsa explained, players will be able to acquire blueprints for new vehicles, which they can then bring back to their base and build with the proper materials. Every commander has their own HQ, and over time will be able to expand it and buy more buildings - for instance, buying an Airstrip lets you call in air strikes in combat, whereas buying a Delivery Station allows you to send units to and receive units from your friends and comrades-in-arms.

Every vehicle in the game, whether in the forces of a tank, artillery, or strike commander, was part of a "set," we were told - and if you had all the vehicles in a set, you and anyone in your party got a bonus to their abilities. Collecting complete sets was very important, we were told, and that was why it was necessary to trade and sell units back and forth: In a way, it's like Pokémon, but with tanks.

End of Nations is a very ambitious game, but one with potential to tap into two distinct audiences: MMOG fans getting bored of the same swords-and-sorcery world, and RTS acolytes looking for something different. It's scheduled to release sometime in 2011.

Visit the End of Nations website to see images and some snazzy videos.