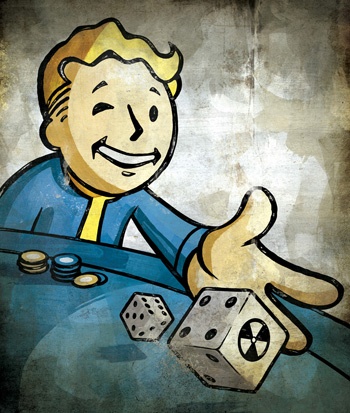 Spoiler Alert: If you would rather be surprised by the new content and story of Fallout: New Vegas, you should probably not read this. We've tried to avoid dropping any major spoilers, but in a game this detailed, it's hard to completely avoid them. Read on at your own risk.

When Bethesda Softworks announced a few years ago that they were working on a reboot of the Fallout franchise, Fallout 3, the response from many fans was mixed. One the one hand, more Fallout was probably going to be awesome. On the other, there was another Fallout 3 long-time fans of the franchise were looking forward to, but that would never come: Black Isle Studios' Fallout 3, the direct sequel to Fallout 2.

Black Isle shut down while their Fallout 3, dubbed "Van Buren," was still a work in progress, and details of that version of the game have leaked over the years, leading to lots of hand-wringing by Fallout purists. It was going to be turn-based. It was going to have a lot of what made the first games so wonderful. And yet, we will never get to play that game.

Instead, we have Bethesda's Fallout 3, which, while lovingly faithful to the world of Fallout, has gone in a number of directions that run counter to the originals. That's not a criticism. Bethesda's Fallout is amazing, and the sales numbers support that. And yet playing the game is a vastly different experience than playing the original titles. It's first-person instead of isometric, for one thing, which is more of a nod to the evolution of game design and technology than anything. But there are many other minor differences that hardcore fans have come to loathe, and for which Bethesda is largely (and rightfully) unapologetic.

What, then, would be the most unexpected development in the history of Fallout games? What could Bethesda announce for its next Fallout title that would both mystify casual observers and potentially satisfy the hardcore fans of the franchise? How about announcing that the next title in the series, Fallout: New Vegas, would be developed by Obsidian Entertainment, the studio created by veterans of Black Isle, and headed up by Feargus Urquhart, the team leader on Fallout 2?

The Escapist was present at Bethesda's Gamer's Day last month in Las Vegas, got an exclusive sneak preview of New Vegas, and a chance to sit down with Urquhart for a one-on-one interview. You can read the interview here. For all the latest news about New Vegas, read on.