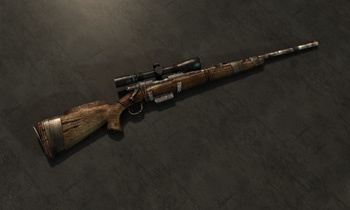 What Happens in New Vegas ...

What sets New Vegas apart from Fallout 3, aside from numerous gameplay tweaks we'll get to shortly, is its tone and setting. Fallout 3 was set in the Washington D.C. area, a part of the United States with a decidedly iconic and perhaps overly dreary tone. As a result, Fallout 3's tone was iconic and kind of dreary - a tone that fit the setting and the look of a devastated U.S. capital quite well.

New Vegas, however, is a different animal. After all, how can the destruction (and rebirth) of Las Vegas be anything but absurd? Las Vegas is the city of sin, where money is made and lost in staggering volume and where people from all over the world come to let loose. It's also located in probably the strangest part of the country, at once part of the stoic desert culture of the Southwest and the kitschy, campy culture of the Great American Interstate society, which is home to monuments like Carhenge and The World's Tallest Thermometer.

The Vegas-ness of New Vegas will hit you right from the start, says Project Lead, Josh Sawyer: "Fallout 3 started with us being born and raised in a vault. In New Vegas you begin by being shot in the head and dumped in the desert."

The first few moments of New Vegas will introduce you to the doctor who found you dead in the desert, and put your brains back together to save your life. You will then answer a (very) short series of questions and play an arcade-like game to determine your character attributes. The entire process takes five minutes, after which, the Vegas wasteland spreads out before you and you can literally go anywhere and do anything.

One of the new features in New Vegas about which Obsidian is most proud (and by which hardcore fans are most intrigued) is Hardcore Mode. Hardcore Mode does a number of things, not the least of which is that in it, ammunition has weight, forcing you to carefully consider how much ammo you carry and of what types.

"Hardcore Mode is something you can enable at the beginning of the game," says Sawyer. "It's mostly for players that are more hardcore that have played through all of Fallout 3 and want something that's a little more challenging. Most noticeably, it changes how healing works. Healing happens over time. You cannot just rest to heal your broken limbs. You have to have a doctor's bag or go see a doctor."

Hardcore Mode can be enabled or disabled at any point in the game but there will, of course, be an achievement for playing the game the entire way through in Hardcore.

The change in the handling of ammo will have a great impact on how the game is played, particularly since New Vegas adds a vast number of new weapons and weapon types to the already impressive Fallout 3 arsenal.

Here's a short list of just the weapons Obsidian showed off in the one-hour demo. There are more in the full game. Way more. Twice as many as in Fallout 3:

Not satisfied with simply adding a ton of new weapons, Obsidian, in a nod to the PC community, implemented one of the more popular community-created Fallout 3 add-ons: weapon modification. As a result, many of the weapons in New Vegas can be modified.

Once you equip a mod on a particular weapon, that weapon will show up in your inventory with a plus icon, telling you that it's been modified. The mods will affect the look of the gun, as well as its performance.

"Every mod that you can add to your gun, with very few exceptions, will always show a new model or new texture," says Sawyer.