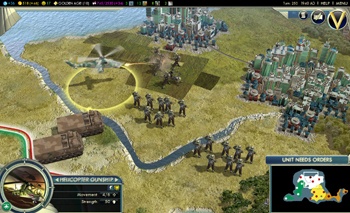 In Civ V, combat plays out a lot more like traditional strategy war games. The map is now divided into hexagonal tiles, instead of the usual square ones, for starters. This will completely screw you up if you've never played a strategy war game, but if you have, it will feel like a breath of fresh air. Units are also now forbidden from stacking. Which means that if a tile is occupied by a troop of spearmen, you can't put another troop of spearmen there as well (and now those spearmen will finally get reamed by tanks, as it should be).

In theory this sounds like a small change, but in practice it's monumental. Units suddenly matter. You'll spend more time leveling them up. You'll bond with them. Battles are now more tactical, meaning you'll take more care where you place your armies and how they traverse the terrain. Instead of piling units on the board and hoping for the best, it's going to take a little more planning to win a war.

During my brief demo, I didn't really get a feel for this. See the above complaint regarding 45 minutes. Combat in the early stages of Civ has always been about developing the sword (or the spear, or the gun, etc.) faster than your neighbor and then using that technology against them. Civ V is no different in this respect. So, generally, if you have the best-equipped army and more units than the next guy, you'll win.

Just in case, the combat system will tell you before you attack what your odds of success may be. If you'll win the battle, but incur heavy losses, your adviser will warn you against the move, but you can ignore him. What's most useful here is that all of the little modifiers that contribute to who wins or loses, things like terrain, fortifications, unit health, are laid out for you to browse before attacking. Wargamers used to doing all of this math in their heads may feel like this is cheating, but in a game like Civ, where combat is only one of the irons in your fire, it's a godsend.

There's another change in Civ V: Cities can only be fortified with one military unit. Beyond that, they're on their own. Cities do have natural defenses, which, as an attacker, you'll have to wear down. These can be bolstered with city improvements and such, but the days of stocking your city with scores of axe men to fend off mechanized infantry are long gone. If you want to keep your cities safe, you'll have to work for it. Which means fielding armies.

There's more to Civ than combat, though, which is why it's good to note that Firaxis also updated the diplomacy and culture game elements. Much of what you're used to from Civ IV makes a return, although religion has been redacted. You'll also be able to spend your civilization's culture points to unlock specific advancements. I didn't get a lot of time to play with this, but certain advancements are exclusive of others, so you'll need to be selective about which bonuses to unlock. Even better, if you get bored with the cultural progress of your civilization, you can use gold to purchase tiles without having to wait for your cultural influence to expand on its own. This is a nice benefit for playing expansionist, but culturally irrelevant civilizations (i.e. you can still win if you want to rule with an iron fist).