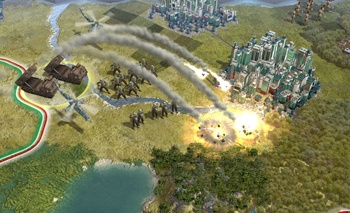 The technology system appears to be largely intact as well. There are some changes and it is (at first glance) a bit easier to pick a long-term goal and then work towards it, but by-and-large this will be a very familiar experience to experienced Civ players. I decided early on that I needed to find out what "dynamite" would give me. Looking over my shoulder, Firaxis' Pete Murray laughed and said, "Everybody picks dynamite. All of the players in all of the demos pick dynamite."

Goddamn right. Give me only 45 minutes and you get what you pay for. What the hell use do I have for banking or construction? You can't take it with you, but you can sure use the time to blow the other guy to shit and beyond.

Since, with my "start from scratch" civilization, I'd set out to conquer the known world, I didn't bother too much with getting to know my neighbors, but it was nice to note that the diplomacy system felt a bit more robust. If I'd discovered any significant technological advancements, or had improved my civilization beyond the most basic stages, I probably could have developed strong and mutually-beneficial relations with all of my competing Civs. As it was, though, my interactions with the extremely well-detailed and enhanced A.I. world leaders was limited to "Wanna fight? Let's go!", which is a bit like using a handgun as a hammer. It will get the job done, but you're missing the point.

The new city states would have helped me play a diplomatic angle as well - if I'd cared. City states are effectively barbarian outposts with advanced culture. They'll never grow up to be a Civ, but they can help or hinder you, depending on how nice you are to them. And they can field armies.

Since I had neither the time nor inclination to be good to anyone during my brief stint, I decided to simply steamroll them all. The bad news here is that cities get a chance to bombard approaching enemy units. Attacking a city state head-on, with a single unit, therefore, led to humiliating defeat after humiliating defeat. The good news is that once I was able to draw their defenses into favorable terrain, I kicked their ass.

Perhaps sensing that the 45 minute time limit was causing some bruised feelings, Firaxis was kind enough to create a scenario for us that takes place later in the game, so that we could experience the thrill of large-scale, multi-unit combat without having to inhabit the 2K offices for a week. The time period was circa the U.S. Revolution.

My time was almost up when I loaded this scenario, so I only had a few minutes to orient myself, marshal my forces and launch an attack - and it wouldn't be easy. I had musket men, some cavalry and a few cannon. I was attacking a couple of large cities, and their fielded armies of roughly the same units I had.

My enemy had pretty successfully ringed his cities with infantry, denying me the high ground near his cities. I'd have to fight him off to get my cannon in range to begin wearing down his cities' defenses. Unfortunately he was dug in, and I was attacking at a disadvantage.