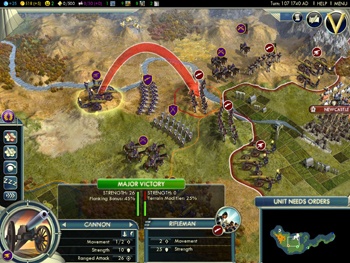 I decided to launch a feint attack at his center, flank his left with my cannon and attempt a flanking maneuver to his right to come up under his cities, where there didn't appear to be any defenders. I thought it was a brilliant plan at the time. I soon discovered I was wrong.

My feint attack failed. My forces were decimated then destroyed as enemy reinforcements came from - I don't know where - to bolster their line. To be honest, this was at the end of my demo (see: 45 minutes) so I was hurrying and not paying a lot of attention to details like, for example, counting the enemy's forces.

After my failed frontal assault, the enemy destroyed my cannon and divided my forces. Things quickly went catastrophic from there. There southern plain I had assumed to be defenseless was actually teeming with enemy infantry, reinforcing the value of good intelligence. Since this was a one-shot demo, I didn't see the value in surviving to fight another day so I decided to see what happened to Civ cavalry when outnumbered and charging a fortified infantry position. I knew what should happen, but this is Civ, right? This is the franchise that brought us the concept that a sufficient number of bi-planes can fend off stealth bombers. Surely I could make something happen with a little daring and a lot of horse.

At this point I'd been playing for 44 minutes, 30 seconds. My PR rep was approaching to kick me off the computer. I was sweating, not just from the stifling New York City heat, but from the anticipation of an all-or-nothing gamble. I may have only had less than an hour with the game, but I'd already been sucked in. I was committed to my plan and I was enjoying myself more than an objective journalist in a heavily-structured hands-on demo is supposed to.

In spite of the heat, the frustration and the confusion, I'd fallen in love with Civilization all over again, in less than the amount of time it takes to cook a chicken.

Even though I knew I couldn't, shouldn't win this desperate battle against overwhelming odds with inadequate forces - and that it wouldn't matter even if I did - I wanted to win. I needed to win. If nothing else, I wanted something to show for my brief time with Civ V, so that I wouldn't have to leave with the regret of not having "one more turn" to try again.

So I told my military adviser to shut up and aimed my cavalry at the enemy line, and charged. Then I died. My head sank to the keyboard and I was asked to leave the room.

The sweet comfort of a properly air conditioned room has never felt so bitter.