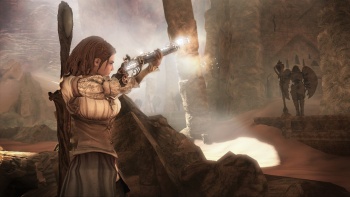 At San Diego Comic Con 2010, Microsoft held an event to showcase some of their upcoming games. I've been excited to play Fable III ever since I met Peter Molyneux at this year's GDC and, even though he wasn't there to show it, I felt like this playable build was just another step on the journey. I was one of those players who was completely disappointed in the first game when it came out, possibly due to Mr. Molyneux's promises, and I didn't bother picking up the second one (even though Susan Arendt says I should.) All I can say is that Fable III just feels like a better designed game. From the ground up, the design team at Lionhead has concentrated on fixing the worst parts, while accentuating the fun bits.

The demo build had me playing a female main character who was dressed in her mercenary outfit. I'mnot sure why a mercenary looks like a steampunk Joker from The Dark Knight but it worked. Watching my character stroll around the hamlet and interacting with all manner of townsfolk, complete with striped longstockings and a gun strapped to her back, I felt like I was a stranger, but that I could have a profound effect on these people's lives. Which is kind of the point of Fable III.

I wasn't sure what I was supposed to do at first so I did what any self-respecting gamer would do. I went up to random people and alternately danced and farted in their face. The animations I was rewarded with for these interactions are funny and lifelike. You totally get if people will be into your joke or offended just from the way they move and react to you. As advertised by Molyneux, you can indeed "touch" anyone you encounter, holding hands with them and leading them around, or if they're mad at you, drag them.

After I exhausted the possibilities of fun there, I walked up to a blacksmith with a sign out front, which told me that the shop was for sale. Luckily, the demo build provided me with a limitless supply of gold and I promptly bought the blacksmith. From the sign menu, I could then set the prices for this shop at one of three levels: expensive, fair, or cheap. After a certain amount of time passed, I would receive gold profits from the transactions in that shop.

Of course, that didn't give me carte blanche over all of the stuff that the blacksmith had for sale. I still had to buy a huge sword and a long rifle. After they were purchased, I instinctively hit start and was brought into the new 3D menu system. My butler, Jasper, is indeed voiced by John Cleese and his wit and style pervade the menu experience. Jasper gives little hints on how to equip armor or what kind of combat each type of weapon excels. In the clothing section, you can undress to your skivvies and Jasper is sure to notice, quipping that most people choose to walk around somewhat more decently. Not all of the menu options were implemented for this build, but, again, it seems to function much better than previous versions of Fable. I could anticipate spending a lot of time trying on weapons or clothes, just so that I could hear random jokes delivered by John Cleese.