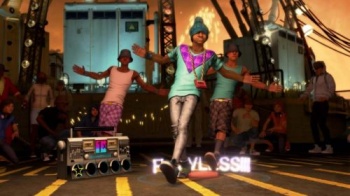 On the other side of the room was the set up for Dance Central. Like Rock Band and other rhythm games, it is a lot harder than it looks. I didn't get a chance to dance any of the five tracks on the demo (ranging from Lady Gaga to Bell Biv Devoe's Poison, "Never trust a big butt and a smile") but, if the amount of people laughing, moving and grooving to the beat is any indication, everyone loved it. One of the coolest features is that during every song there is a 10-20 second "breakdown" where points are not counted and you can do whatever moves you want. This is displayed onscreen in a trippy graphic, and then video from your awesome dance is shown to everyone. It was a neat way to keep the mood light and the party jumping.

This was actually a feature that I saw in a lot of the Kinect games. Taking advantage of the fact that people often like to see themselves being ridiculous, the games will display highlights or quick video shots of what you look like when you play. Far from being embarrassing, these little snapshots give you the chance to laugh at yourself and with the audience. It's akin to those pictures taken after you ride a roller coaster. Yeah, you might not shell out the 20 bucks for a glossy print, but everyone likes to check out the stupid faces they make as they plummet 200 feet.

One of the most intriguing Kinect titles for me was Child of Eden. I'm not really sure how to describe it. Hallucinatory shoot em up? Trance Shooter? There are shapes that pulse and move to the beat of a techno soundtrack and the player points towards the part of the screen that must be cleared. But that's not it, there are different mechanics at work for each stage and part of the joy was figuring them out. There was no UI, no visual feedback other than the swirling pulsating shapes. It felt nothing more than being inside music, if that makes any sense.

Playing the kind of games that Microsoft has lined up for the Kinect launch was kind of exhilarating. Many of the titles worked in a party atmosphere, with players jumping in and out and a crowd always on hand to cheer the antics. I'm still not sure whether the gamer that likes to sit on his couch and play Mass Effect 2 or Final Fantasy XIII will want to play while standing for that long, but that's not really the market that Microsoft is aiming Kinect at. If its goal was to provide a library of games that people that can Kinect with together (see what I did?) to share a gaming experience in the living room, then I think that the collection of games described above might just pull it off come November.

Greg Tito is pretty sure that he looked completely ridiculous at least five times while playing with Kinect.