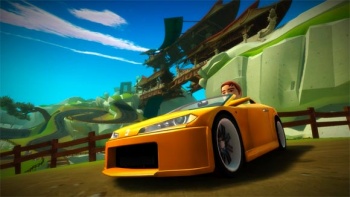 After playing a bunch of titles using Microsoft's Kinect, I can say that the gimmick works.

After all of the bruhaha of E3, I was still skeptical of Microsoft's version of motion control, Kinect. Would it be worth the $150 price tag? Are the games for it any fun or are they just Wii retreads? While I still reserve my opinion on the first question, I think the second question is a lot easier to answer. Yes, Kinect is fun, and in a way that's either better or at least different than the Wii.

The first game I got to play was Joy Ride, developed by Big Park Games. It's a lot like Mario Kart, pitting you against another player in a souped up vehicle and racing in a cartoony, non-realistic world. The character in the vehicle is your Xbox Live Avatar. Despite all of the similarities to Wii, the game played much differently.

Steering is accomplished by holding your hands up as if you were in fact holding a wheel. To get a boost of speed, you pulled the "wheel" towards you and then pushed forward. Going over jumps, you do flips and tricks by flailing around. Kinect is responsive enough that you don't have to exaggerate your movements, but that didn't stop me doing so. In fact, because I was playing with my real body, I felt more in control of the game than I have with any other input device. Racing felt clear and intuitive, aiming for green boosters in order to gain speed over the opponent that can barrel into you and push you off to the side of the track. It was a lot of fun, and I beat the guy from Big Park, so that was a bonus.

Next up was Kinect Sports. I consider the bowling game in Wii Sports to be a big reason that the console sold as many units as it did, but I can say that Microsoft has trumped Nintendo with their own version. Taking the bowling bowl is as simple as reaching left or right (the game corrects if you are right or left handed). If you want to move a couple of boards to the left, Kingpin style, all you have to do is step that way. Pulling back and releasing the ball is easy, but the thing that sold it for me was how much spin i could put on the ball. By lunging forward and following through, I was spinning like crazy and knocked down strike after strike. It felt amazing. Just ot test it out, the dev next to me encouraged me to the thorw the ball a the pins overhand. Sure enough, the ball soared and bounced heavily on the lane just as if I had thrown it like a baseball. The bowling game might just be Microsoft's killer app on Kinect.