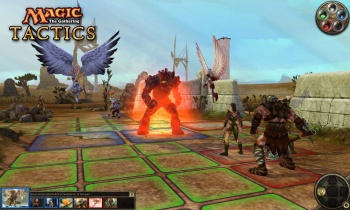 If you remember from my rundown of the best 5 games from E3, I was very excited to play Magic: The Gathering Tactics. At Comic Con 2010, I was able to check out the latest build and I was impressed with the changes to the UI and the new units. It's clear that the team is in polish mode to get MTG Tactics ready for its release on the PC in early to mid fall, with a PS3 release in the spring. Like many of its online games, Sony Online Entertainment plans to release MTG Tactics at no cost, supporting it through sales of boosters and cards.

In Tactics, you play as a planeswalker, one of the wielders of mana that you personify when you play the Magic card game. You will definitely recognize some of the iconic characters from Duels of the Planeswalkers, such as Liliana Vess and Garruk Wildspeaker. Two planeswalkers face off on a battlefield grid, complete with choke points, walls and sinkholes that affect the movement and range of your units. You use mana to summon creatures onto the field, which then have their own spot in the initiative order. You can order your creatures to move up and attack the opponent planeswalker, who is busy summoning his own creatures to defend him or herself. The tactical combat is all about getting your units into the right positions to deal the most amount of damage before your opponent does the same to you. Creatures deal a certain amount of damage with every attack, but each unit also will retaliate when attacked, so it's important to judge when it makes sense to press forward or wait on defense. Unit can retaliate only once per turn in the initiative, so you can sozk up the damage with a big heavy unit like Coal Stove without endangering the little guys like a Goblin Piker.

Even though the gameplay is vastly different from Magic, you might be familiar with many of the spells and creatures in Tactics. The abilities of spells and creatures will be a bit tweaked, however, to account for the tactical game. The Serra Angel's Vigilance ability, for example, allows her to always retaliate. In the match that I played, I summoned a Shivan Dragon and a Bird of Paradise, which has an activated ability that gives a random color of mana to your pool. Mana is generated over time in turns based on the number of spells in your deck of a certain color. For example, if your deck is half white and half green, you would generate 2 white mana and 2 green many every turn. If your cards are 75% white, you'll get 3 white mana and 1 green mana. You can save up mana to cast bigger spells; there is no mana burn.

The depth of the tactical combat was apparent immediately. Is it better to quickly summon small creatures or to wait to get out that big monster of a Timmy creature? Flying creatures can go over obstacles like other units and walls, so they add an important element to your strategy. Buffing with Giant Growth can be devastating as the opponent will not be able to see what buffs are on a particular unit. If you're playing a blue deck, you can indeed Counterspell, but you must make the decision to counter the opponent's next spell without yet knowing what that spell is going to be. This forces you to gamble on whether your foe is casting something big and worth countering, but that does mean you can counter a small heal.

"We're looking for that surprise element, setting up ambushes and things like that," Blaine Loder, the head of QA on MTG Tactics. "It might be a Counterspell waiting in the wings. You might cast your enchantment and then find out, oh that was countered." In this way, it's important to recognize what kind of mana your opponent is wielding and whether he might have the resources to screw with you.