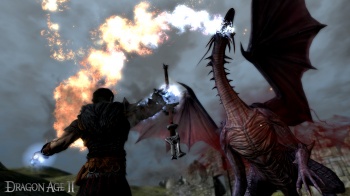 Let's be honest: As excellent as Dragon Age: Origins was, it was not without its problems. It had exceptionally good writing, strong voice acting, and some truly unforgettable characters - part of why it was my favorite game of last year - but the difficulty balance was way off, the inventory was unwieldy, and if you played it on a console, your eyes may still not have recovered from its unique brand of ugliness. BioWare is aware of all of these things, and is giving Dragon Age a near-complete overhaul. Even the bits of Origins that worked got a second look to see how they could be done better to create an experience that feels fresh and refined.

"Dragon Age 2 looks better, plays better, and has an entirely new story," says lead designer Mike Laidlaw. Concerned that Origins both looked and played too "old fashioned," the design team wanted to "give Dragon Age a shot of adrenalin," as executive producer Mark Darrah puts it. And so just about everything has been changed in some way, whether it's a minor tweak to smooth out some rough edges, or the total reworking of an idea that never quite came together the way it should. But don't worry, says Laidlaw. It may not look quite the same, but at it's heart, "It's still Dragon Age."

In case you're not up to speed on Dragon Age 2, here's a quick cheat sheet. Although it has a 2 tacked on to the end of its name, it's not really a sequel in the classic sense. Although its beginning overlaps with the events of Origins, its scope is far greater, spanning many years after the first game's time frame. In Origins, you chose a character based on their origin story, but in DA2 you are Hawke (male or female, your choice), forced to flee your home in Ferelden and make your way as best you can in Kirkwall. You are not a revered Grey Warden, you're just a refugee like everyone else fleeing the Blight, doing the best you can to keep your family and friends safe and fed. Hawke isn't a particularly glamorous hero, but that's the point: the theme of DA2 is that there are no chosen ones, no pawns of prophecy - just people doing the best they can on any given day.

Origins was all about your hero gathering armies to fight a horde of Darkspawn, but the Blight is a mere blip in the action of DA2. Instead, its focus is on Hawke's rise to power, which is shrouded in myth and legend. In the middle of a revolution, when the formerly mighty Chantry has become all but powerless, Hakwe became the Champion of Kirkwall and changed the world - but how? That story, told in flashback by the dwarf Varric as he's interrogated by the determined Cassandra, is what will play out during your adventures.

Virtually every aspect of Dragon Age got a second look for Dragon Age 2, but here are a few areas that received the most love from BioWare:

The combat in Origins had many failings, beginning with its unbalanced difficulty. "Was the default setting, especially on PC, too hard? Yeah," admits Laidlaw. "'Normal' felt more like 'Hard' to me." Even players who mastered the combat noticed other issues: It frequently felt sluggish, the rogue didn't feel much different from a warrior, and trying to be an archer just plain sucked.