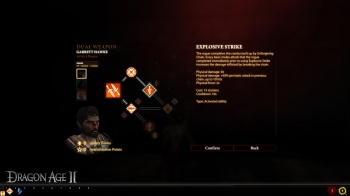 The tactical side of combat returns, allowing you to pause the game and form a cohesive plan based on your current party, but the quick pace of fights has been ramped up for those favoring a more action-oriented combat style. Combat in Origins often got bogged down by fighting animations - rather than actually throwing a spell or shooting an arrow, a character would go through a big windup and then, eventually, get around to actually doing whatever it was you they were commanded to do. According to Laidlaw, BioWare wanted the fighting in DA2 to feel more immediate and less like "some invisible person rolling D20s behind the scenes."

The design team also decided to inject a bit of common sense into the combat. "If you're a mage, and you're carrying around this big stick, why can't you hit someone with it?" asks Laidlaw, pointing out that ranged combatants, like mages and archers, had little recourse when the fighting got up close and personal. Now, rogues and mages also have melee attacks - not particularly strong ones, but certainly better than just standing there and getting socked in the face.

One new feature in DA2's combat is one you'll almost assuredly come to hate, but for all the right reasons: assassins, commanders, and devastating mages. These new specialized threats are mixed in with more common enemies and have moves all their own. They will also kick your ass. I ran into a few Assassins during my playthrough, and I'm pretty sure I could hear them giggling as they cut me to pieces.

The crafting in Dragon Age: Origins made logical sense: In order to make, say, a health poultice, you had to first learn the recipe, then find all of the necessary ingredients. It was a fine system if you only wanted to make one or two items, but the games' many different potions, poisons, and traps meant you were running around Ferelden with all kind of components rattling around in your backpack. Fighting a demon with 87 frostrocks in your inventory is not heroic or sexy, so the entire system has been redone. Now, rather than having to carry components around with you, you simply have to find their source out in the world. Once you come across a strain of Elfroot, for example, all crafting vendors will have access to it - no need to shuttle bits and pieces back and forth. The challenge now comes from finding the different sources of raw materials, and the different strains of components. It's a far more elegant system, one that rewards exploration over hoarding, unclogging your inventory in the process.

The linear progression of the skill trees in Origins meant that you frequently had to spend valuable points on talents you never had any intention of using so that you could get to the one you actually wanted. It was a well-established and accepted system, but it oftentimes sapped a lot of the enjoyment out of leveling up. The skill trees in DA2 are actually webs, more circular in nature and offering more than one path to the really Hot Stuff skills. Skill upgrades branch off from their base skills, leaving the way clear for other progressions. If you want to spend several levels making sure you're deadly with a shield, you can, but your path to other talents is clear if you'd rather not bother. There still has to be some progression, of course - you can't go from acolyte to towering badass in just one jump - but the web definitely feels much more open and forgiving, allowing you to spend points the way you really want to, as opposed to the way you have to.