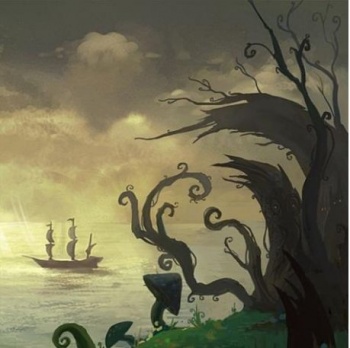 It wouldn't be Salem without a little witchcraft, but it's not in the sense of magic that you're accustomed to in other games. "Witches will be players," Johannessen said. "We want to create the paranoia of an early Pilgrim society. Witchcraft and magic in general won't be anything like hurling fireballs and crap like that. You can put a curse on things. You can make your neighbor's cow milk blood --- all of the traditional perceptions of what witches were believed to be capable of."

If you are the victim of what you believe to be a witch's curse, what's your recourse? How do you accuse Goody Smith of turning your milk red? "There will be a special crime scent for witchcraft," he said. "So it's a crime to practice magic." The catch is that not everybody will be able to detect that particular scent. "We haven't decided yet but you will probably have to be a priest."

"We were thinking that burning a witch would remove all of the ill effects that she had created," Tolf added. Unlocking the magic or witchcraft skill will be fairly high level, and that's because they want it to be special and not common. The danger is that every player will want to be the most powerful character and therefore unbalance the game, not unlike the Jedi problem in Star Wars Galaxies, but the danger of being outed as a witch and burned will hopefully cap that desire.

As the player settlers head out into the wilderness in search of resources for their crafting, they will encounter more and more fanciful beasts based on literature of the time, including Squonks, Hidebehinds and even Cthulu-inspired baddies. You can also encounter Native Americans, and choose to befriend or eliminate them as you see fit. As buildings and crafting becomes more complex, no one player will be able to accomplish what a village can - it takes a village after all. There will be ways to organize into groups, as well as set crime permissions in the lands that you or your village has claimed. Boston will be the starting area, and you'll be able to buy and sell goods from the Hudson Bay Trading Company on a limited basis.

Salem is one of those games that has me intrigued as a functioning world simulator because it has so many interlocking systems. The reward for crafting is increasing your humors, which in turn depletes your humors. Killing enemies or other players reduces their blood, which can only be replenished by eating food that you or someone else crafts. Players will be encouraged to specialize, explorers are needed to map the wilderness and find new resources while bounty hunters will inevitably pop up to track the guy who killed your character. Witchcraft will be a more subtle form of PvP, poisoning the well of a neighboring village to drive down their productivity, and then priests will specialize in rooting out their evil. That in turn can create a whole hysteria, with players pointing fingers at who the witch within their midst might be.

Yeah, there's a lot going on in Salem. This isn't your typical hack and slash MMO. Who knows if it will end up as revolutionary as it looks right now, but Salem has enough going for it that I'll be on the docks of the Hudson Bay Trading Company when this game comes out later in 2011, ready to enter a brave new world with my fellow Pilgrims.