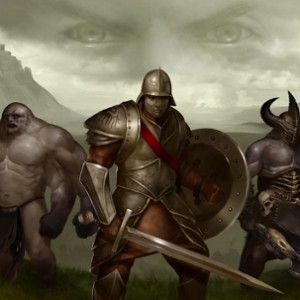 Ironclad's new Sins of a Dark Age has me on the horns of a dilemma. On the one hand, I'm not a fan of its Defense of the Ancients style gameplay and the unfriendly audience it's sure to attract. On the other hand, Ironclad's previous effort, Sins of a Solar Empire, blended real-time strategy with 4X elements to create a game that was not only very innovative, but pretty damn fun as well. So when Ironclad wanted to show me its latest hybrid, I wasn't really sure what to expect. Happily, the developers have a solid gameplay design and a number of ways to encourage the normally hostile DOTA audience to welcome new and inexperienced players.

At its heart, Sins of a Dark Age is a fantasy hybrid between the base-building, unit-producing RTS games like StarCraft and the DOTA style hero play of games like League of Legends. In a typical five-on-five match up, one player on each side will be taking charge of the peasants, building towers and barracks, harvesting gold and mana, and pumping out rank and file melee and ranged units. The four other players on each side will each be playing DOTA style hero units who are tasked with destroying the opposing commander's base.

There are ten sort of factions in Sins of a Dark Age, but they're much more internally consistent than those in League of Legends. This is a dark fantasy game, through and through, so you won't find robots or cowboys or Santa Claus among the roster of heroes. You will, of course, find the usual archetypes. There's a fast ranged character like Ashe, for example, but there are also many more subtle characters to play. One particular character acts as a sort of mage slayer whose play style is much more refined and complex.

One of the key innovations in Sins of a Dark Age is the concept of positive reinforcement for cooperative play. In a medieval sort of Communism, some of the gold harvested by the commander is shared by the hero players, and some of the gains made by hero players are shared by the commander. In this way, each group is encouraged to attend to the priorities of the other. The commander can also grant gold to heroes directly, giving them the chance to buy new magic items in the shop.

More importantly, the commander can produce units and assign them to specific heroes. Have a massive lumbering tank? Why not kick out five or six archers to escort him and protect him from hit and run attacks? Or maybe one of your heroes is a powerful but fragile caster. You can assign a group of spearmen to him to ensure that the enemies don't get too close. Different commanders will have different powers as well. The merchant, for instance, can collect gold more quickly and use it in more ways than the other players.

This synergy between the RTS and DOTA concepts really seems to work, but it obviously requires some knowledge and skill on the part of all players. Here's where games like League of Legends or Savage, which also has a commander element, tend to fall apart for me. How do you motivate players of individual avatars to ignore their own perception of priorities and attend to those of the commander? Having commanders who are not just decision makers, but can also intervene on the battlefield, either by giving players money or units, or using massive commander powers to drop dragons down in the midst of enemy units seems to go a long way towards solving that problem.

Perhaps the most encouraging part of the demo was that the developers seemed fully aware of the current barriers to entry in games like League of Legends and are specifically trying to break down those barriers in Sins of a Dark Age. I'm still not sure you won't get yelled at for feeding now and then, but Sins seems designed to create a more supportive atmosphere overall.