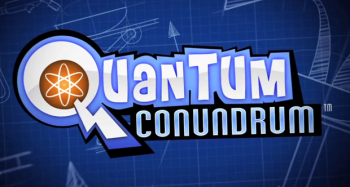 Quantum Conundrum's comparisons to Portal are well deserved. Both have a wacky sense of humor, a crazy scientific setting, and use a few simple mechanics to create a range of gameplay opportunities. I just had the chance to play through a bit of the game here at GDC and can't wait to play more. You play as the grandson of Fitz Quadrangle, a crazy inventor who is waiting for you somewhere in his massive, experimental house. Your job is to find Grandpa Fitz but to do so you'll have to negotiate room after room of cross-dimensional physics puzzles, which get progressively more and more complex.

At the start, things are spelled out for you. There's a locked door, a platform, a safe that's too heavy to pick up, and a giant drinking bird in the corner. Every time the bird goes down, it hits a button and warps the room to the fluffy dimension where everything is light as a feather. The trick is to grab the safe and move it to the platform before the bird comes up for air. Once that's done, the door opens and you can move on.

Eventually you gain access to the IDS glove, which allows you to make the switch back and forth from the regular and fluffy dimensions yourself. After a bit more puzzle solving, your grandfather, who's instructing you via an intercom, switches things up and begins swapping back and forth between the regular dimension and one where everything is much heavier.

You'll have to learn to manage the light and heavy states of various safes and cardboard boxes to activate switches, break windows and create pathways to move on to the next room. Sometimes that merely means tossing a cardboard box at a laser beam and switching to the heavy dimension so the box stops the laser. Other times it means timing your switches so that the lasers can cut a particular pattern out of a large collection of boxes.

The next mechanic switches to a dimension where time is slowed down. The drinking birds activate this dimension, so you won't have any direct control over the timing of it. Instead, you'll have to time your jumps through spinning fans and onto anti-gravity furniture to make your way from one end of the level to the next. I could definitely see how the interplay between the three starting dimensions might start to get more complex, but the demo ended just as the game seemed to get challenging.

The only real downside, apart from simply not being able to play more of the game, is that the solutions to all the puzzles in the demo were fairly straightforward. I'm hoping that the final version will allow for more open-ended exploration of solutions. In the meantime, this first taste of the game whetted my appetite for more.