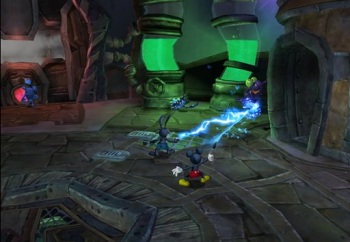 Despite the mixed critical reaction, Disney's Epic Mickey is the best selling single platform game in Disney Interactive Studios' history, which makes the fanfare surrounding the unveiling of the sequel, the smartly named Disney's Epic Mickey 2: The Power of Two, in Austin, Texas this week completely understandable. In addition to playing and discussing the game with series creator Warren Spector, attendees were also treated to an exhibit of Disney memorabilia, some from Spector's own personal collection, and a rare viewing of an early Disney cartoon short, which had been missing for decades.

After the obligatory introductory remarks, Spector takes the stage to talk about the reception of the original game and the changes we can expect to see in the sequel, due out this Fall for all three consoles. He talks about how positive the public's perception was, both of the game itself and its characterization of Mickey. He talks about the demand for a sequel. While that's all fairly standard for these types of announcements, Spector really grabbed the audience's attention when he revealed that the new game would, in fact, be a musical.

Make no mistake; this is not a game with songs that interrupt the plot every now and then. This is a full musical, with score by James Dooley and lyrics by Disney's own in-house lyricists, where the plot is driven by the songs. As a long-time fan of musical theater, it's clear that Spector wants to do even more, referring to this game as an important "baby-step" towards this kind of storytelling in games. Epic Mickey 2 seems like the perfect place to take those steps. The whole idiom of American musical theater is so central to the entire Disney brand that it would seem strange for this game not to be a musical.

The game's opening scene proves the point. Oswald strolls down the street of a recently restored Wasteland, where cartoon characters go when they are forgotten. Just as an earthquake begins to shake the street apart, the Mad Doctor and his Beetleworx creations arrive on the scene in a twisted sort of take on the Main Street Electrical Parade. The Doctor sings a stirring musical number, using the refrain "Help me help you" to convince Oswald to join forces with him to save the Wasteland. Once he leaves with the Doctor, Oswald's girlfriend, Ortensia, again reaches out to Mickey to set things straight.

Before we get hands on with the game itself, Spector highlights a few key improvements the team is making. First, he promises that the camera has been improved with over 1000 specific changes. In fact, he says, the new camera is reportedly so much better that you should never even have to touch the manual controls at all while on the main story path through the game. He jokes, and not for the first time, that he could give an hour-long lecture on how difficult it was to make a game like the original Epic Mickey. In this particular case, the difficulty is in managing the transition between the higher angle perspective required by Mickey's platforming elements and the slightly lower angle required for the moments of combat and environmental interaction.

Fully voiced dialogue has been added as well. The previous game's barking dialogue was another of Spector's decisions, driven in part by a Japanese influence and also by the need to preserve Oswald's character as a silent film star. In his second mea culpa of the night, Spector admits it just didn't work. For the sequel, he and his team have hired Marv Wolfman to write the dialogue and recruited Disney-licensed actors to provide the voices for all the iconic characters. Veteran voice actor Frank Welker, probably best known as Fred from Scooby Doo, has been tapped to provide the first ever voice for Oswald.