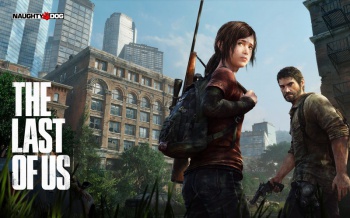 Uncharted developer Naughty Dog offered one of the few genuine surprises at Sony's recent pre-E3 events. It's not that I didn't already know about The Last of Us, but the demo's reliance on quiet moments of humanity stood in stark contrast to most of the other publisher demos. There are shouts aplenty to be sure, but also several significant silences that drew my attention in far more than the overbearing set pieces of other games. In an industry where nuclear explosions, towering giants, and star-hopping spaceships are the standard, the human relationship at the heart of The Last of Us creates a much more compelling reality.

The game follows Joel and Ellie. He's a grizzled sort of loner we've seen a hundred times in games like these, but his character takes on a new dimension due to the presence of Ellie, a teenage girl stuck between childhood idealism and a post-apocalyptic cynicism. The pair fall into a sort of father-daughter relationship, which gives Joel something to care about other than himself. In terms of attitudes, it reminds me a bit of The Road by Cormac McCarthy. The pair must survive the results of a disease-driven apocalypse

In the demo, Joel and Ellie are driving through streets crowded with abandoned vehicles when they spot a man acting hurt on the road ahead. Ellie's curious but Joel immediately suspects an ambush and guns the engine to race past the struggling survivor. It turns out Joel's suspicions were right on the money; as his truck reaches the next intersection, a group of bandits crashes an abandoned bus into Joel's truck, sending it crashing into a nearby garage. Ellie's presence really heightens the tension here, because as Joel, the player realizes he has a liability, someone to worry about other than himself.

The tension ratchets up even higher as the bandits seize Ellie when the pair tries to escape from the crashed truck. Joel pulls out his gun and fights it out with a handful of bandits in the dim garage, and the whole time I kept feeling the urgency of wanting to take out these guys and find Ellie. I won't spoil the encounter or the eventual reunion with Ellie, but the whole sequence is a wonderful example of how silence and stillness can sometimes be more interesting than fireballs and heavy soundtracks.

It's the sense that something is about to happen, or that danger is just around the next corner that really drew me into the demo. When Joel and Ellie begin scavenging for ways to get out now that Joel's truck is ruined, you're always worried that the pair is making too much noise in the city.

Eventually they decide to walk towards a nearby bridge in hopes of getting away from the city. The setting tells more of the story here. There's a huge traffic jam of abandoned vehicles leading up to the bridge and Joel explains that the military must have killed the people as they were trying to escape the quarantine. As the pair climb over the cars, they hear a group approaching from the other side. Not knowing what to expect, Joel and Ellie hide just as another group of bandits climbs into view in front of them.

That's where the E3 demo ended, but Naughty Dog has promised to show even more soon.