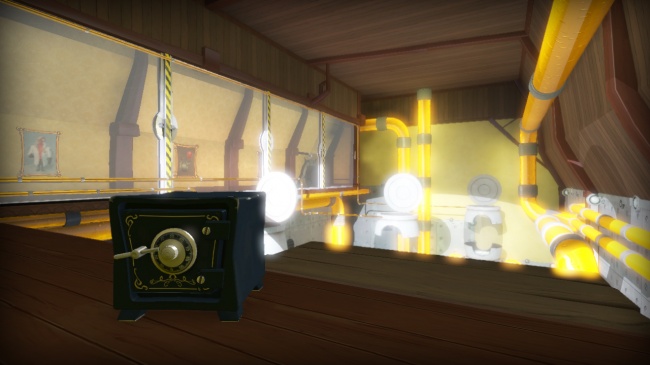 It's Portal. That's what I came away thinking about Quantum Conundrum after the various trailers and hands-off demos that I'd seen. It looked amusing enough, and I figured it would probably be fun, but its puzzles - which were typically solved by moving a box of one kind or another onto a pressure plate - just seemed to hew a bit too closely to Portal's design for me to be all that excited. Today I actually got to mess around with Conundrum myself, and was utterly enchanted by it. It's still about moving boxes around, but seeing the game in action can't adequately convey how effortlessly entertaining it is.

I played through a simple tutorial that introduced three of the game's dimensions - fluffy, heavy, and slow motion - teaching you how to use them in order to get past the various puzzles put in place by Fitz Quadrangle, voiced by John DeLancie. Once he's shown you the very basics about switching between our dimension and other, weirder, dimensions, Quadrangle lets you have an IDS Glove so that you can move between them at your leisure. Mastering the game's puzzles will be matter of understanding how the different dimensions work in relation to ours, and how their differences can help you manipulate your environment. The fluffy dimension, for example, makes the objects around you much lighter, while a trip to the heavy dimension makes them all weigh far more. You're not strong enough to lift a safe, but hop into the fluffy dimension and you can toss it around the room like it's nothing more than cardboard.

The challenge of Quantum Conundrum comes from layering simple concepts into elegantly craft puzzles. Fluffy objects are light and easy to toss around, heavy objects are weighty and can withstand punishment. Master those concepts and before you know it, you're making a couch fluffy, tossing it towards a window, then switching to the heavy dimension to send it sailing clear through the glass.

The trickiest part of the demo came from the use of the slow motion dimension, which Fitz Quadrangle was controlling in one section of the house. A table in the slow motion dimension made for fine transportation, until it dropped out of that dimension and back into real time. The sequence, which involved hopping on and off of various pieces of furniture as they threaded their way not only through the slow motion dimension but also the passages of the house itself, called for some deft jumping and accurate timing, neither of which I had in abundance at that particular moment. I failed. A lot. A whooooole lot. To the point that the Square Enix rep watching me was growing visibly concerned that my lack of jumping acumen was going to destroy my opinion of the game. But even though I was dying over and over again, even though sometimes I didn't understand what had gone wrong, I never stopped having fun. Not once. I fell in the same spot at least a half dozen times, and for the life of me I could not figure out what I was supposed to do after that last armchair, but I was still having a blast. That's the mark of a damn fine game. Quantum Conundrum's style won me over as well. It's funny without being overtly slapsticky, and presents a pleasingly chubby art style and robust color palette. It even has a cute critter - the Interdimensional Kinetic Entity, or Ike for short.

The demo was pretty basic and didn't do much more than illustrate the game's many possibilities, but what little was there was engaging, funny, and charming. It's definitely channeling Portal, but in all the right ways. Quantum Conundrum will be out on Steam June 21 and on Xbox Live and PSN later this summer.