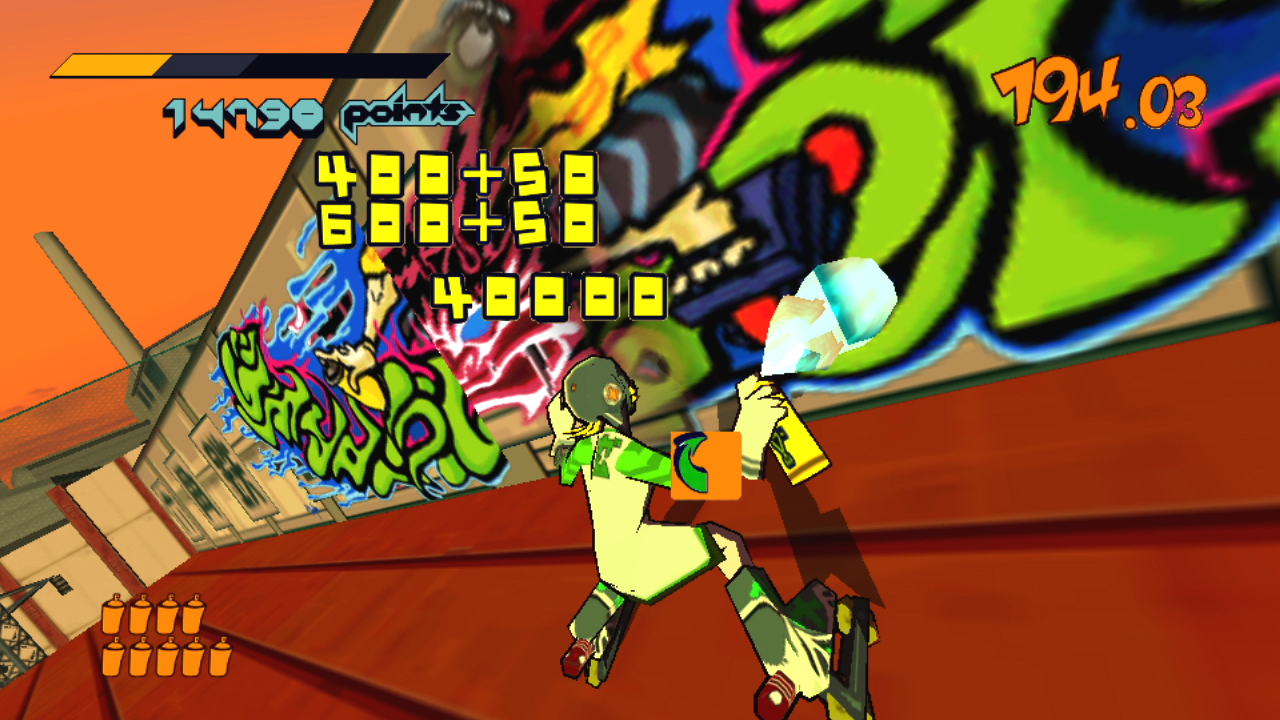 Few games evoke love for the Dreamcast like Jet Set Radio. Its hand-cramping gameplay -which had you skating, jumping, and grinding your way around Tokyo as you sprayed graffiti - made it fun but it was its soundtrack that made it legendary. Trying to play Jet Set Radio without its songs from Hideki Naganuma, Guitar Vader or Deavid Soul just wouldn't be possible. Just for a second, picture Jet Set Radio without "Humming the Baseline." Or "On the Bowl." Or "Grace and Glory." Actually, stop trying to picture that, because it's a horribly depressing thing to consider. The U.S., UK, and Japanese versions all had slightly different song lists, but happily, just about all of that music made it into the PlayStation Vita version. (The lone holdout is a tune from the UK version.) This is the Jet Set Radio you want.

In case you're as yet unfamiliar with Jet Set Radio, it casts you as part of a young skater trying to extend your gang's influence in Tokyo by spraying graffiti all over town - especially over the tags sprayed by your rivals. The police aren't overly fond of your activities, of course, and adopt increasingly insane methods to try and stop you, like guns, tear gas, and tanks. You're safe so long as you're grinding, and after a few levels, you'll begin to see that the entire brightly-colored city is made up of places you can access, grind, or jump - if you've got the flexible fingers needed to make the right moves.

You'll need to collect paint cans along the way in order to have enough ammo to create the requisite number of tags in each area, and you're racing the clock as you do it - two facts I'd forgotten as I bumbled my way through the first level of Shibuya-cho in the Vita version of Jet Set Radio. The handheld's isn't all that much larger than a Dreamcast controller itself, so it felt oddly natural to play the game that way.

It takes a lot of work to make it it look like you haven't done anything to a cherished game from days gone by but bring it to a new platform. If all Sega had done to Jet Set Radio was shove the Dreamcast version into the Vita, its age definitely would've shown, especially when it came to the game's distinctive cel-shaded visuals. But Sega wisely took the time to tidy things up, and as a result ... it looks like all they did was shove the Dreamcast version into the PlayStation Vita - which is to say the game from your memory shows up perfectly on the screen. The stubbier analog sticks take a wee bit of getting used to when it comes to maneuvering your skater around, but you'll be tagging in no time, swirling the right stick to whip out those really huge tags.

If you love the original as much as I do, this just may be your incentive to finally pick up a Vita.