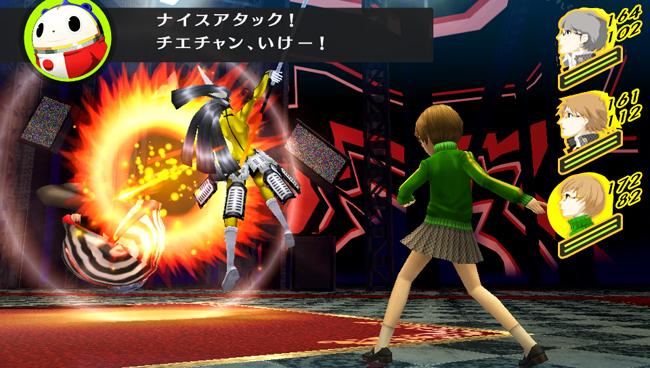 Mention the Persona series to a gamer and you'll either get a puzzled look or an unbelievably excited response. The long-running Japanese RPG series may be obscure, but Persona 4 was incredibly well received upon its release in 2008. Unfortunately, the fact that it launched on the PlayStation 2 when the PS3 had been on the market for two years meant that it was quickly overlooked. Now it's getting another chance with Persona 4 Golden on the Vita, which has even more content than the PS2 version did.

For those new to the series, here's the short version. Persona 4 features Japanese high school students who get sucked into their televisions and have to fight demons in the bizarre television dimension. They're able to summon personas, who represent aspects of their personalities, to fight for them in battle. The turn-based combat system uses an interesting rock-paper-scissors mechanic, with the ability to switch between personas adding more depth and strategy. What I especially love, though, is the use of social links. The relationships your protagonist builds during the day affect his powers and personas, so there's some fascinating time management between social obligations, school, part-time jobs, family, and demon fighting. And you thought high school was tough for you!

Upon playing the Japanese version of Persona 4 Golden yesterday, the first thing I noticed was the psychedelic new intro video. It's colorful, it's trippy, and best of all, it looks fantastic on the Vita screen. Reconfigured for the handheld's widescreen, Persona 4 Vita looks much better than its four-year-old PS2 counterpart, so HD snobs will no longer have an excuse to not play this game.

The core game is the same as the PS2 version, and while there are new characters, none of them are playable. That doesn't mean there's not a lot of new content, though. There's a new "chapter" of the story, a whopping 40% more dialogue, new theme music, and an online rescue system that allows you to get help from a friend when you're stuck in a dungeon. We didn't get to see the online system in action, but it will be interesting to see how that changes the dynamic of the single-player game. There are even bonus goodies to unlock, like a live concert of Persona music.

I quickly made my way through one of the early dungeons in Persona 4 Golden, and even though it was in Japanese, it was easy enough to figure out what I was supposed to do. Of course, I've already put more than 100 hours into Persona 4, but that doesn't mean I'm not excited to do it all again. The gameplay is largely the same, though the Vita version integrates the touch screen for menus, and I was very impressed by the quick load times.

For Persona fans, I'm just preaching to the choir-you already know how good this game is. If you didn't play Persona 4 when it came out in 2008, though, you really have no reason not to now. It's one of the best role-playing games in recent history, and it now looks and sounds better than ever. Persona 4 Golden is due out this fall, which quite frankly isn't soon enough, and I wouldn't be surprised if it's a system-seller that gets more Vitas into the hands of gamers.