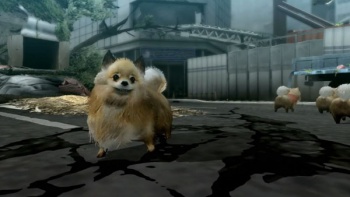 I made a wrong turn. It was a simple mistake, just a failure to turn down the hallway when I should've, but the result was that I accidentally found myself in the room reserved for Sony Europe. A mildly embarrassing error, but one with an unexpected boon: I got to see Tokyo Jungle in action.

Tokyo Jungle takes place 10 years after the disappearance of humankind, as the various pets, wild animals, and zoo inhabitants take to the streets of Tokyo in search of food. Your goal in the game is basic survival - find food, defend yourself against predators, and avoid toxins as you strive to live just one more year. I saw the pomeranian in action as he snuck up on bunnies before pouncing and ripping their throats out. Your hunger is constant in Tokyo Jungle, and if it drops too low, it will start impacting your health. Go too long without a meal and you're a goner for sure, so it doesn't pay to be too picky. Sure, that baby chick is little more than a mouthful, but it'll help you keep going a bit longer, so down the hatch!

Eating won't be enough to ensure your survival, though - you'll have to get busy with a mate, too. You'll want to find the most high-quality mate you can, because the better your mate, the better your offspring. Not only will they inherit better stats from you, but you'll also increase the chances that you'll have more babies. We settled for a "desperate" female who wasn't too fussy and a mere moment after the deed was done, two pom puppies were brought into the world. As soon as you mate successfully, you experience a "Gen change," and take over as one of your kids. Should you perish, you'll swap to one of your other kids, and so on until you either have a new generation or the last of your clan dies.

Not every potential mate will want anything to do with you, though; the better the mate, the higher a level they're going to want you to be. You level up by achieving certain calorie goals, starting at rookie and eventually becoming a boss. Yes, you can have sex like a boss in Tokyo Jungle. As though you needed another reason to play it.

Completing certain challenges, like performing a certain number of "clean kills," will earn you Survival Points, which you can use to purchase animals, such as gazelles, baby chicks, or cats, that you've unlocked by completing other challenges. Survival points will also let you purchase items of clothing, which you'll find as you explore the city. More than just a chic fashion statement, these actually affect your animal's stats, for example increasing defense or speed. Not that putting a tennis visor on a pomeranian isn't a worthwhile goal in and of itself, but it's good to have a solid gameplay reason, too.

Tokyo Jungle is admittedly both really odd and quite gruesome, but there's something appealing about defending a stretch of roadway from a savage beagle attack. It's a PS3 exclusive and will be available in Japan tomorrow, June 7th. No word on a European or N.A. release. Yet.