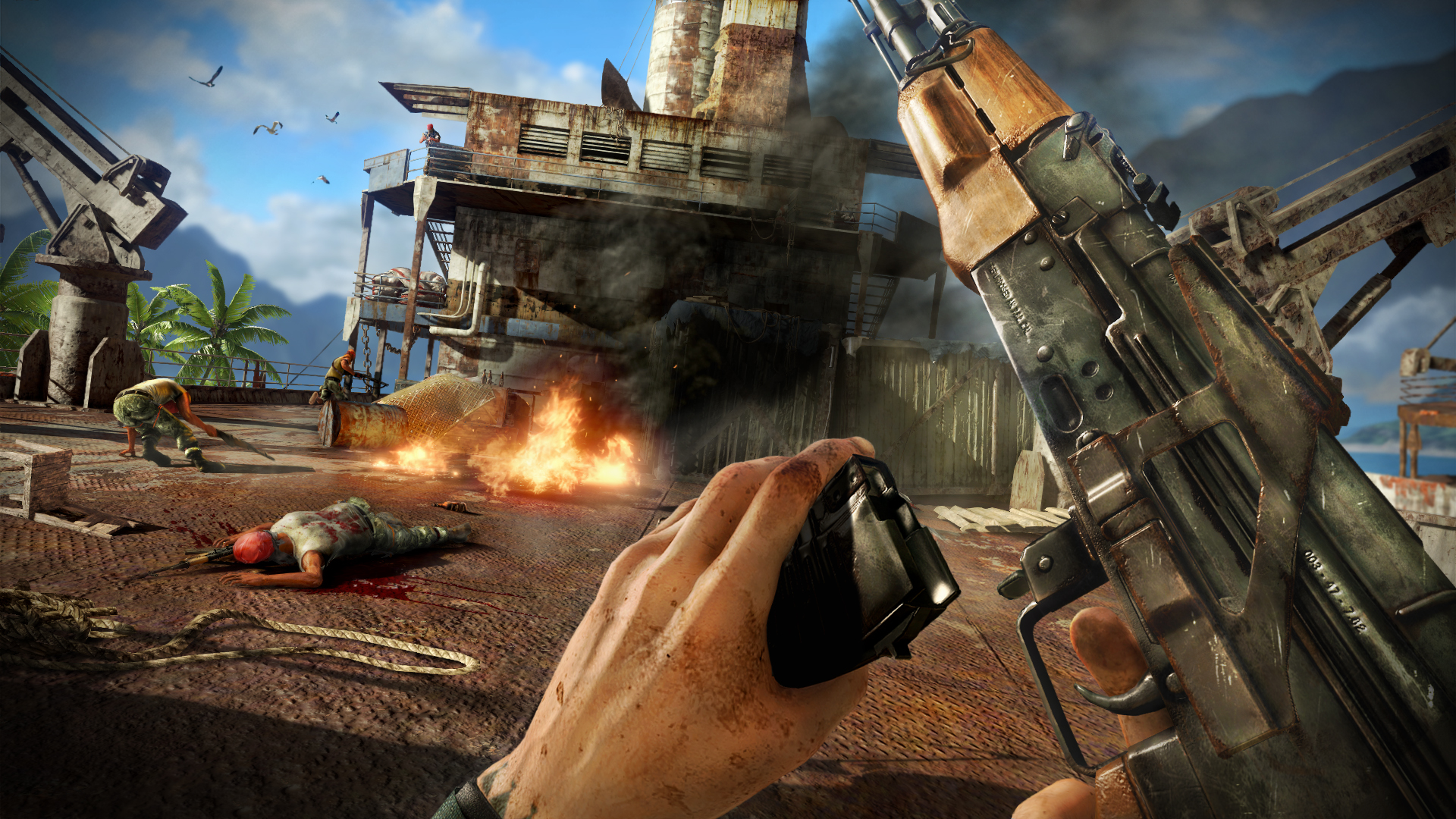 The demo began with a woman fondling her bare chest in front of me. I have to admit, that wasn't exactly what I'd been expecting. The true story of Far Cry 3 remains such a mystery to me that, even now, demo behind me, I'm still not sure I can put the scene in context. The basic idea is that you play Jason Brody, a man who's just taken an accidental jungle vacation to an island full of insane people. Jason has been separated from his girlfriend, and must do what he can to survive the island he's landed on, and the whack-jobs that run the place, while he looks for her.

Fortunately for me, Jeffrey Yohalem, the game's writer, took some time to hang out with me for my playthrough, trying his best to explain the deeper, more cerebral aspects of the game, while I assaulted a small camp of angry people with machine guns.

The mission began on top of a cliff. I dived off and swam quietly to shore, stealth-knifing the guard stationed at the docks. In true Far Cry tradition, my furtive underwater entry was just one of what will eventually be multiple assault plans per mission. The demo, I was told, was much more of a "directed experience" than the final game.

At first, I ran haphazardly up the path, instantly meeting my doom from just two lousy thugs out for a smoke by the trees. Somewhat embarrassed, I tried again, this time with a tutorial on Far Cry 3's new multi-takedown mechanic. After creeping up on Thug One, I pressed the takedown button, and was then able to aim my joystick toward the next baddie I'd like to chain into my attack. A moment later, both were down without a bullet fired.

Soon after leaving the bodies to whatever carrion eaters live on this island, I found myself in a camp that, at least from my perspective, required some old fashioned brute force. As I began frantically switching between a bow, sniper rifle, and machine gun (whatever had ammo), Yohalem began to tell me about his intentions with the game's story.

Yohalem spoke at length about the influence of Western philosophical movements, and the fact that most of the unhinged antagonists you meet are actually based on the principles of various philosophers. He also spoke about how the story was extremely meta-tapping into what he referred to "gamifacation" - and symbolized Generation Y. As you can probably imagine, the heady explanation came as a somewhat bizarre juxtaposition to the out of context run-and-gun murder spree I was currently engaged in while he spoke.

As I reached the end of my fight, a psycho in a Mohawk (Nietzsche? Hobbes?) stabbed me in the belly with blade coated in hallucinogenic jungle juice. There was some sort of bizarre drug trip that followed, including, among other things, an exotic dancer transforming between a beautiful woman and that guy in the 'hawk. It was surreal, to say the least.

As disjointed as the events may have seemed, the demo left me extremely intrigued. The combat itself was nothing extraordinary, but shooting up the mercs is sure to provide some great fun. Even so, I mainly just want to know what's really going on with the island.