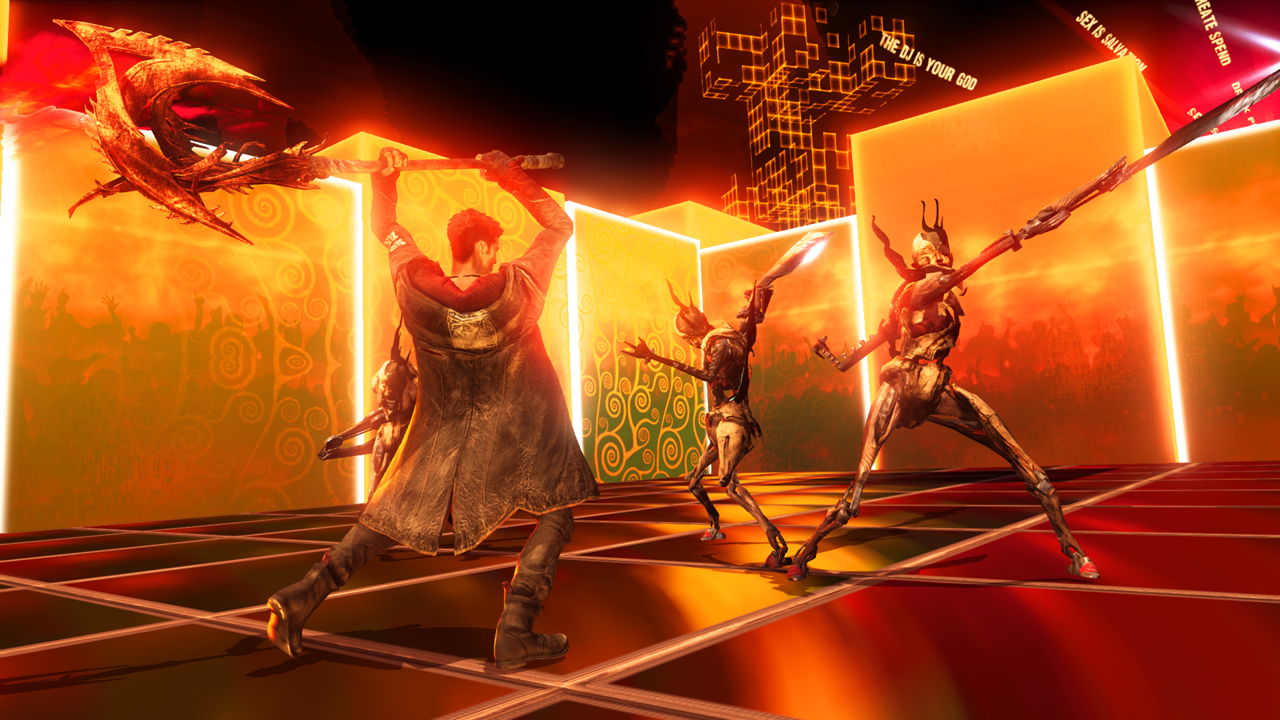 Let me just get this out of the way up front: I never played the original Devil May Cry. At first, I thought that may have made previewing the recently retooled DMC difficult, but instead, it allowed me to play Dante for the first time as the version imagined by Ninja Theory, without the baggage of a long-loved series keeping my eyes closed to the intrinsic experience. All that being said, I had a great time with this game, chaining combos, zipping around limbo, and wailing on a giant flesh demon that had a severe case of potty mouth.

In DMC, Dante is half-angel, half-demon, meaning that while he fights on the side of angels, he's still got a few dark tricks in his toolbelt. The demo began with Dante being an ass, flipping a soda out of an overweight man's hand, quickly adding a snide "That stuff'll kill ya" to heavy the blow. Suddenly, in an unrelated(?) turn of events, the world around me shifted into "limbo," a place where the security cameras are played by the Eye of Sauron, and the ground sometimes has trouble staying in one place.

While in limbo, I was consistently attacked by a variety of enemies. To dispatch them, I found myself equipped with a solid assortment of options, from a heavy, aerial-centric strong attack, to a rapid, ranged dual-pistol assault, to a quick and dirty light sword slash. Making things more interesting was my ability to change that move set into an angel or demon mode, morphing my sword into a glowing sickle or blood-drenched hammer, respectively. Some of these moves shared similar foundation, though remained cleverly different.

For example, one of the enemies I faced was a squadron of little demon baby cherubs - unlikable little dudes who flew above me with a "ha, ha, we're up here"-type attitude. To deal with them, I used my chain attack. Depending on if I toggled my angel or demon powers, this could go one of two ways. With the angel button depressed, I shot a hookshot toward the little nasty, and connected with his head. The cherub stayed stationary, while I zipped up to his body across my chain and quickly put in my blows mid-air. For the second cherub, I did the same move, but with the demon button depressed instead. The same hookshot flew out, but this time, the baddie pulled back down to my location instead; a subtle difference, perhaps, but one that kept combat unique and option-heavy.

Between the battles were some platforming sections that were easily the weakest part of my experience. Some ledges were blue which, shocker shocker, meant I needed to use an angel power to reach them. Others were red, meaning I ... well, I'll let you figure that out for yourself. The associate producer nearby did tell me that the platforming was being tweaked, so hopefully it won't feel as pointless in the final build.

Once I finished that area, I moved straight into a boss fight. My opponent was a decently disgusting giant NSFW flesh-worm-monster-thing who introduced himself by saying "Who the fuck are you?" and vomiting all over my shoes. Lovely. There was a bit of back and forth that followed (mainly just, "I'll kill you!" "Oh, no you won't!) and then this happened:

It was possibly the most quality script of the show so far.

After the Shakespeare, the boss fight got started, employing the standard red-lit vulnerability zone and pattern attacks. I had more fun fighting the minions on the street, but the boss seemed an engaging, if normal, large-scale battle.

It will be interesting to see if original Devil May Cry fans decide to give this re-imagining a try. I can't speak to the original experience, personally, but judging the playable sections by their inherent entertainment value: fun is to be had.