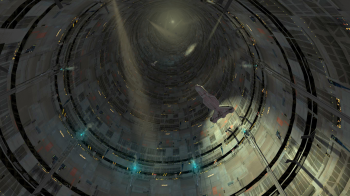 If Jedi is the ultimate Star Wars wish-fulfillment fantasy, bounty-hunter has to be a close second. With only a handful of lines, a bunch of cool gear, and bunch of unanswered questions, Boba Fett became one of the original trilogy's most popular characters. Now gamers will have a chance to play a bounty-hunter in the ruthless criminal underworld of Coruscant. Danger, shady characters, and backroom deals are all part of the world of Star Wars 1313, a new game produced by LucasArts internal development studio.

The planet of Coruscant, known for its shining skyscrapers, is actually built up of thousands of levels. The game takes players down near the planet's core on level 1313, where the glitter and gloss of the upper world give way to a grim and gritty underworld where law is scarce and criminals hold sway. It's the industry's first mature expression of Star Wars, with dark characters and a lot of shades of grey in the story. This isn't a quest where Jedis and Sith make the heroes and villains easy to identify. In fact, there's not even any Force in this game.

As far as the bounty hunting goes, LucasArts suggests that it's the gear, the iconic set of weapons and gadgets, that make the bounty hunter such a compelling archetype. You'll get your hands on some of the galaxy's deadliest weapons in this game, and will even be able to use your armor and tech powers to emphasize the agile, mobile nature of the bounty hunters. Still, because LucasArts isn't quite ready to talk about the game's main character, the PC demo we saw used a placeholder hero, a youngish, slightly cynical, blaster-type who, even as a placeholder, was still more believable and human than 95% of the other characters we're used to seeing in games.

The character is partner to a slightly older, seemingly more experienced fighter. The older character tells the younger that it's a long ride down to level 1313, where fresh air and safety are rare. Of course, the pair don't even have time to make it all the way down before things go wrong. As their ship descends through the massive tube leading down to 1313, a sinister ship drops down slowly above them. Inside we see soldiers waiting as a droid grabs a cable and jumps out an open ramp in the rear of the ship. The droid lands on top of the lower ship and initiates a boarding action.

The lower ship is damaged as the pair of fighters holds off not only the boarding droid, but also the soldiers who have dropped into the battle. At one point, the older soldier pushes an enemy into an escape pod, throws in a thermal detonator and then launches the escape pod at the other ship! The whole sequence is insane, not just because of the action, but because of the tremendously realistic graphics.

The new game is being developed with artists from Skywalker Sound, LucasFilm Animation, and Industrial Light and Magic. You can tell from the quality of the motion capture, the lighting, the effects, and the audio design that the production value of this game is well beyond anything that LucasArts has ever offered. While it's no great surprise to see the pre-rendered cutscenes of this quality, I was amazed that there's no drop in quality once the player takes control of the scene and it starts rendering everything in real time.

The various production units in the Lucas system have built hybrid systems that allow the LucasArts team to use film-level capture and rendering to bring an unprecedented level of authenticity to the game's visuals and audio. The live performances of the actors are captured on set, allowing the digital versions of the characters to be as authentic as possible.

Battlefront and Lego aside, it's been a while since we've seen a really great original Star Wars game, particularly from the studio which owns the franchise. With everything the team has lined up for Star Wars 1313, it might not only be one of the best Star Wars games in recent memory, but also a real change of direction for a studio that seems to have been unable to do much with its biggest license.