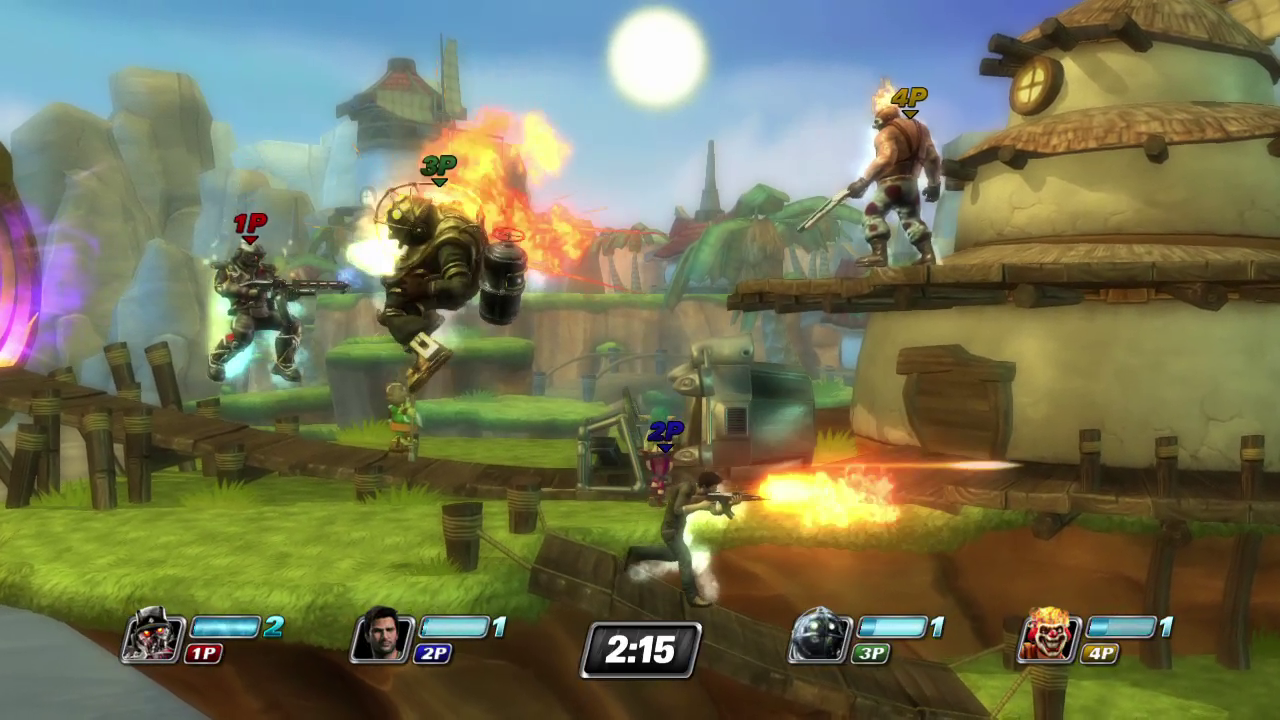 It's impossible to discuss PlayStation All-Stars without at least bringing up Super Smash Brothers. Aside from sporting a roster pulled straight from popular IPs, All-Stars borrows genre, style, maps, items, aesthetics, and moves. Nothing specific, of course (sorry, no Pokeballs), but almost all of the elements that defined SSB are present in some form or another here. All except for one.

I played two matches of All-Stars during my demo, one as Fat Princess, and the other as Kratos. Each game was a three-minute timed match, with wins based on a score calculated from a simple kill/death ratio. Players pick their combatants, their map, and three, two, one, fight! As soon as the match starts, the action quickly follows.

Fighters have three basic moves at their disposal: heavy, quick, and unique. Performing these in the air, or while moving in a certain direction can sometimes cause variations, but the idea is almost always the same. As players wail on one another, meters beneath their names begin to fill. Each bar represents a player's ability to perform a super move, the one major deviation from the Smash Brother franchise. Instead of battling down an opponent's resistance to gravity to eventually knock them from the stage, only these super moves can score the kills. Each has three levels to build toward, requiring one bar per. As you can probably imagine, they vary in both range and effectiveness as the levels grow, moving from something akin to a simple body-length punch, to summoning a gigantic chicken ten times your size that insta-kills anything that comes in contact with it.

The reliance on super moves doesn't quite seem to work, as they inevitably feel cheap. And because the winner is determined by a kill/death ratio, it's equally important to not be the one killed by a super as it is to kill someone using a super. That can really sting when you're killed by happenstance during an enemy's level three while another player just so happens to be on the other side of the map or protected mid-respawn.

General combat is cute, but clunky. Like any fighting game, learning a move set takes time, but during the course of two full matches, I never felt like I quite had a grasp on what was actually effective. It's tough to see who is getting hit and why, a problem to blame primarily on the animations.

In the end, a game like this will always maintain value from featuring characters you love in deathmatchs that we would otherwise never see. The actual gameplay, however, feels tired, and not just because it's borrowed so heavily from a popular franchise. The floaty, imprecise controls feel taken from Brawl more than Melee (easily the fan favorite of the series) leaving the question: if you are going to recreate a game, why not take the best, and attempt some innovation to stitch the product together? There didn't seem to be evidence of either in All-Stars. After all, a clone of an original can be competent. Perhaps even improved. But the moment you start cloning clones, quality assurance goes right out the window.