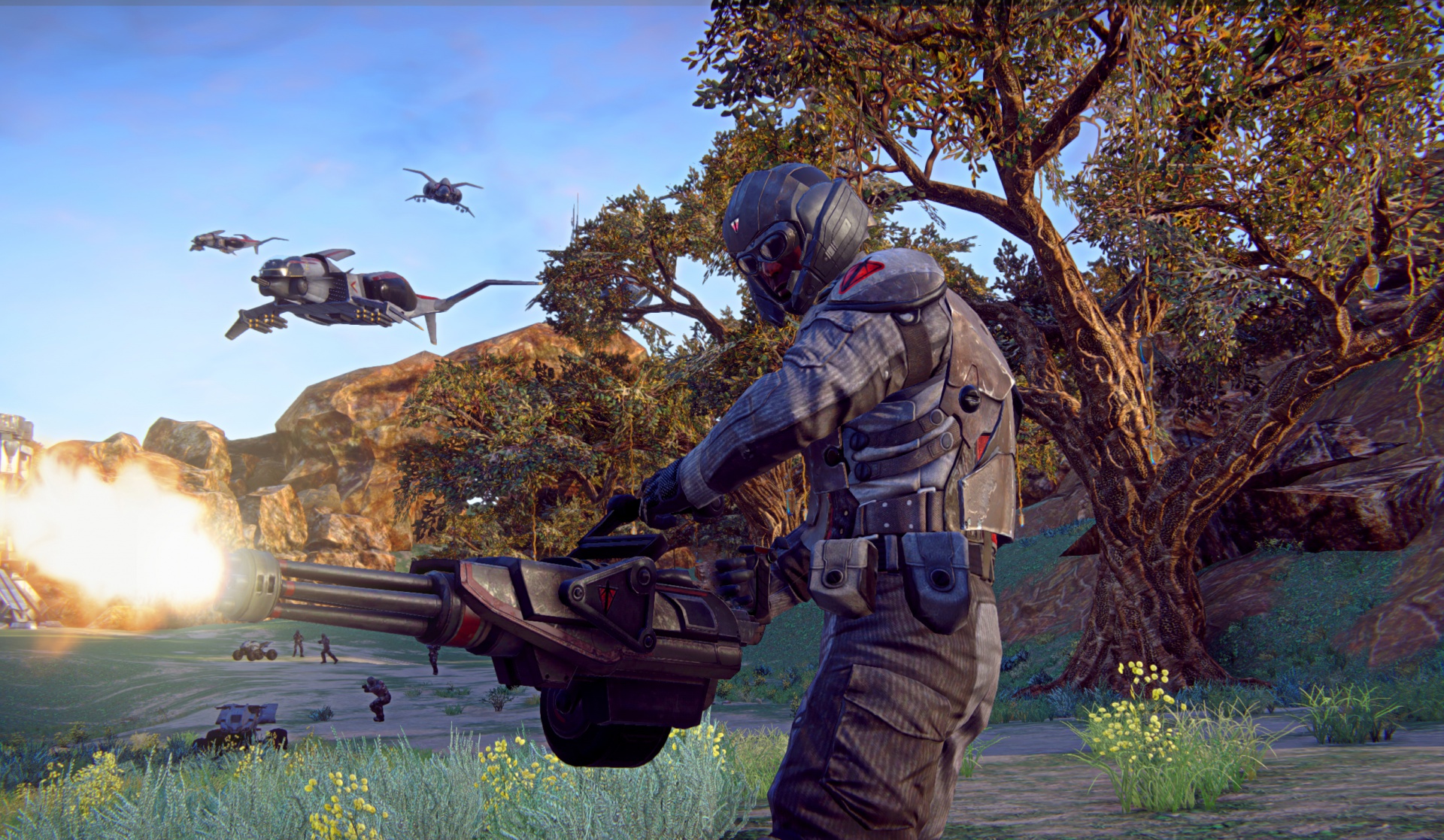 One of the most exciting trends in the gaming industry right now is the way games don't fit quite as neatly into existing genres as they used to. Puzzle games can be first person, shooters have role-playing elements, and the letters "MMO" don't necessarily have to be followed by "RPG". Upcoming PC title PlanetSide 2 is following in its predecessor's footsteps by providing gamers with a first-person shooter experience on a massive scale, with hundreds of players working together-or against each other-in a huge open world. It's ambitious, it's beautiful, and it's very deep. And it's also completely free to play.

I got to spend some time in just a small part of the world of PlanetSide 2 at E3, though I was told the environment would be much, much bigger when the game was complete. The game doesn't use instances, preferring instead to have constantly moving action. Visually, Planetside 2 looks amazing. The players, vehicles, weapons, and environment are incredibly detailed, and the graphical polish makes it hard to believe that it's a free-to-play title. "This wouldn't be capable on a console," one of the developers told me.

The developers were also excited to share the deep character customization found in PlanetSide 2. Each class had skills that would take hundreds of hours to unlock. Weapons and vehicles could be modified in varying ways. However, the microtransactions designed to fund the game will only be cosmetic. Players can unlock new weapons and upgrades just by earning then in-game, and pay for new skins or other modifications that won't actually give them more power. No one can pay their way into more powerful characters, which is really important for keeping the game balanced.

The map itself consisted of three empires trying to take control of every portion of the area, with each location constantly under contention. This made it easy to find something to do, though there were a lot of actions. I could hop a dropship, jump in a tank, or simply run on foot to the nearest enemy. In the final game, there could be hundreds of players working together to meet a single objective, yet playing PlanetSide 2 never felt chaotic.

The developers also stressed the strategy involved in gameplay, which makes PlanetSide 2 more than just a first-person shooter on a massive scale. It was compared to Risk: in the short term, the player might just be moving pieces across a board, but the bigger picture, of course, is world domination. The different roles in battle required different strategies, and not every class was about running and gunning. No weapon or vehicle is necessarily better than others, just better suited for certain situations.

To keep the community active for years after its release, PlanetSide 2 has a massive social structure build right in. There's even an iOS and Android app that allows players to look at the map and voice chat with others when they're not in the game. While that might be a little distracting-try telling your boss that you're barking orders through your iPad because an enemy empire is claiming your territory-it seems like it will be really great for enhancing the PlanetSide 2 community.

The developers of PlanetSide 2 set out to make an FPS MMO that encouraged competition as well as community, and offered strategy instead of just shooting. So far, it looks like they're well on their way to success. With the built-in community features and deep customization, it's not hard to imagine gamers being able to play for a long time without running out of things to do. Of course, the fact that it's entirely free doesn't hurt, either.