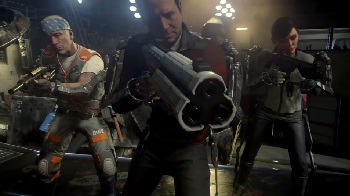 Turn any weapon into a diamond-encrusted tool of destruction with a final bonus upgrade available in Advanced Warfare's Exo Zombies map Outbreak.

During the course of a typical Exo Zombies online game, weapons can only be upgraded a total of 20 times. For those willing to run through the painfully difficult trials associated with the "Game Over, Man" trophy, there's one last Easter egg to unlock when the rescue mission is done. See what's up with the Mark 25 Upgrade Station in the quick guide below.

Included in the first add-on pack for Call of Duty: Advanced Warfare, Exo Zombies is an upgraded version of the Exo Survival game mode. Instead of pitting four power-suit soldiers against endless waves of AI grunts, you'll need to fight hordes of the hungry dead. Closely matching the Zombie modes of yester-year entries in Activision's long-running franchise, Advanced Warfare picks up the tradition after the popular game mode was skipped in Call of Duty: Ghosts. Tons of Easter eggs, secrets, and bonus activities return to make these obtuse extras especially hard to uncover alone.

Learn how to finish the biggest Exo Zombies challenge solo or with friends on the Call of Duty: Advanced Warfare - Outbreak "Game Over, Man!" Easter Egg Completion Guide.

After completing the complicated Game Over, Man Easter egg on Havoc's Outbreak map, there's an additional secret available to unlock. Following the final sequence, most survivors have nothing to do but try to survive until the zombie hordes manage to wipe the team out.

The computer announcer unlocks a special reward for going through all that Easter egg effort. She activates a new Upgrade Machine located in the Exo Station room. 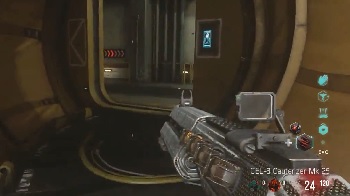 Travel to the back corner of the room to check it out. Remember, this particular "Pack-A-Punch" machine only becomes available after completing the Game Over, Man Easter egg.

This special Upgrade Station costs 2,500 points. It only works once, for one weapon, and that weapon must be upgraded to Mk 20. Following a single use, the Upgrade Station breaks down.

If you meet all the requirements the Upgrade Station creates the most powerful version of that gun with a diamond-studded camo skin, charging its rank up to a blistering Mark 25.

Use this upgrade to survive even longer solo or online. It's especially useful paired with the CEL-3 Cauterizer shotgun.