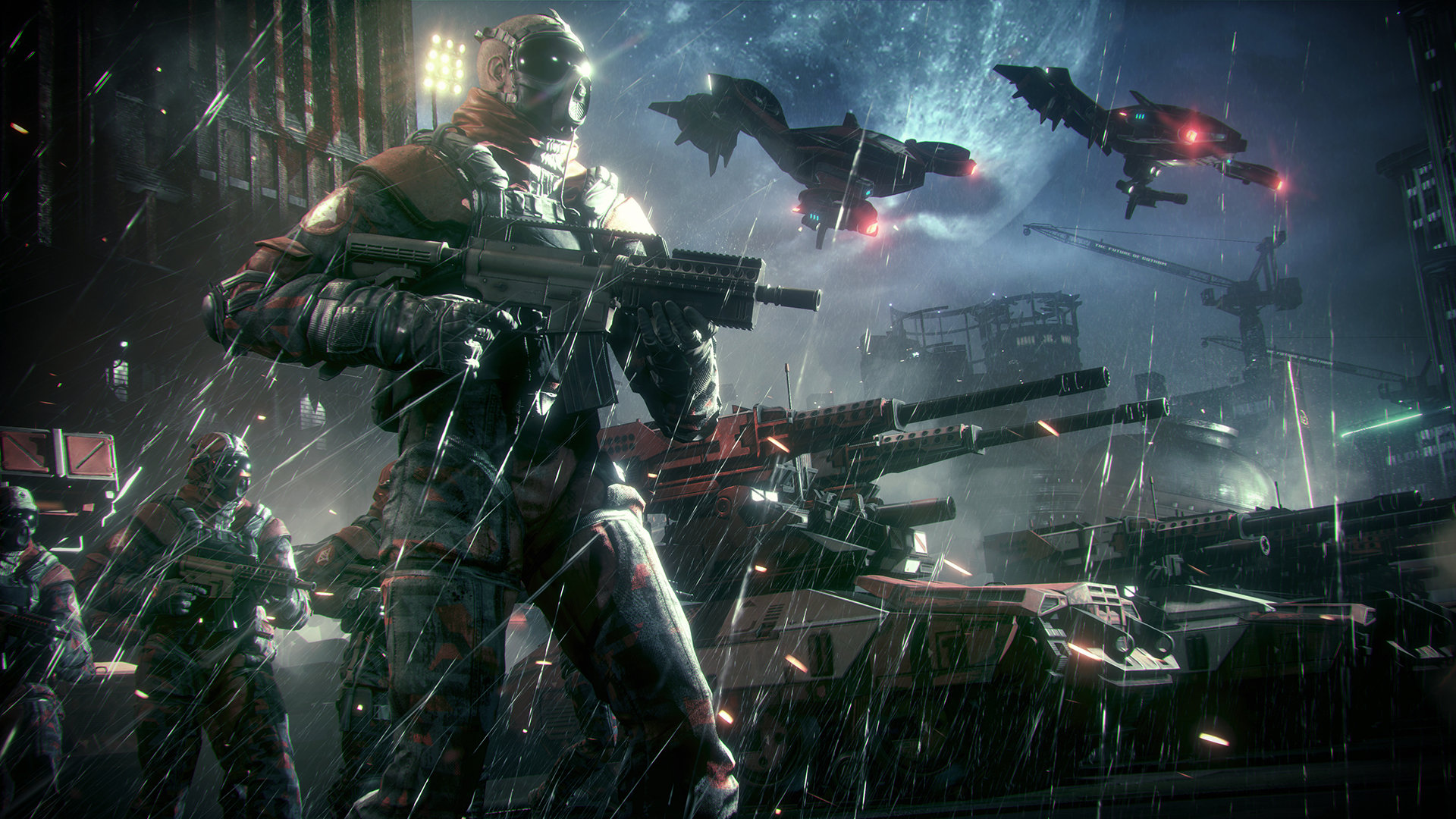 The crime-ridden streets of Gotham of plagued by another infestation thanks to the developers over at Rocksteady -- Easter eggs. Learn about just a fraction of the references, name-drops and secrets with our Arkham Knight rundown.

There's so much to discover in the open-world Gotham, it's going to be nigh impossible to cover every little detail. This series is full of references and to avoid creating an endless list, we're sticking to the secrets and winks that are especially easy to miss. That's still plenty to cover, so keep checking back as we update with the latest discoveries.

Steam users are experiencing plenty of problems on release. Alleviate two common issues with our Arkham Knight Tweaks Guide, showing you how to remove the 30 FPS cap and skip startup logos.

Work-In-Progress: Let us know what we missed in the comments.

Later in the story, Lucius Fox invites Batman to his office at the top of Wayne Enterprises Tower. Through the balcony doors, there's an answering machine just to the right of the entrance.

Listening to the messages, Bruce Wayne can hear many familiar voices from across the DC Universe. One of those voices belongs to the villainous Lex Luthor.

For those on the lookout, there's a tall LexCorp skyscraper in downtown Gotham, along with signs, advertisements, and propaganda celebrating Luthor's Gotham reconstruction project.

Superman's nemesis takes business into his own hands, and leaves an angry message on Bruce Wayne's line, making yet another declined offer on Batman's Wayne Enterprises Applied Sciences division.

The Applied Sciences division originally appear in Christopher Nolan's Batman Begins with the character of Lucius Fox leading the defunct section where Batman's gadgets and gear were produced.

Another surprise cameo appears over the phone, in the same place as Lex Luthor's message. This one is decidedly more friendly, as a woman named Kate Kane invites Bruce to her wedding with long-time significant other Maggie Sawyer.

Rarely seen outside the comics, Kate Kane is Batwoman and close confidant of Batman. Unlike his other allies, the two Bat-themed heroes don't work closely together, but help each other from time to time.

Notably, Kate Kane is a prominent LGBT character in DC continuity, where she developed a lasting relationship with Gotham cop Maggie Sawyer, culminating in their marriage.

Plastered to one of the walls in Oracle's clocktower hideout, Batman can discover an ode to the Dark Knight's own inspirational serial hero. The poster ad titled "The Ghost in Gray" features a familiar face for fans of Batman: The Animated Series.

As strange as it may seem, Batman: The Animated Series is the most influential piece of the Bat-franchise where Rocksteady is concerned, bringing back many of the original cartoon voice actors to reprise their roles since the onset of the Arkham series. Most notably, that includes the distinctive Kevin Conroy who has played Batman in three out of the four Arkham games.

The character of the Gray Ghost was introduced in the Batman: TAS episode Beware the Gray Ghost, where a giddy Batman tracks down his childhood idol the Gray Ghost -- only to find out that the man is an actor, not a hero.

As the episode progresses, the elderly Gray Ghost embraces his heroic reputation and saves the day. In another connection to Batman lore, the Gray Ghost was voiced by none other than Adam West, the man behind the Bat-cowl in the live-action 1960's show.

This isn't the only connection to that television series featured in Arkham Knight either.

Return of the Shakespeare Bust

Arkham Knight and it's gritty, rain-soaked atmosphere may seem far away from the kooky camp of the 1960's Batman television series, but Rocksteady put one particular nod that detectives can't miss.

Early in the story, Batman visits his ally Oracle. In her Watchtower, Batman must interact with the Shakespeare bust to press a hidden button that reveals Oracle's secret equipment, installed to aid Batman in his war on crime.

The bust makes a second appearance later on, when Batman visits Lucius Fox in his Wayne Enterprises office. Built into the bookshelves, there's an optional bust that reveals more Bat-themed vigilante cases filled with prototype armaments.

Bruce Wayne's Shakespeare bust, complete with a detachable head that flips back to reveal a secret red button, was made famous in the comedic 1960's show. A good Bat-developer can't leave out the classics.

Once Batman acquires the hacking device, it's possible to find an early look at Batgirl's costume from the upcoming add-on. It looks fairly inspired by the Batman: Animated Series design, focusing in mostly on the black and yellow motif.

To get a gander and her current-gen duds, return to the Watchertower base and activate the Shakespeare bust to uncover her Oracle gear. In the back corner, there's a terminal you can hack with a simple switch. Turn it on, and another hidden compartment slides out to reveal Barbara Gordon's full costume.