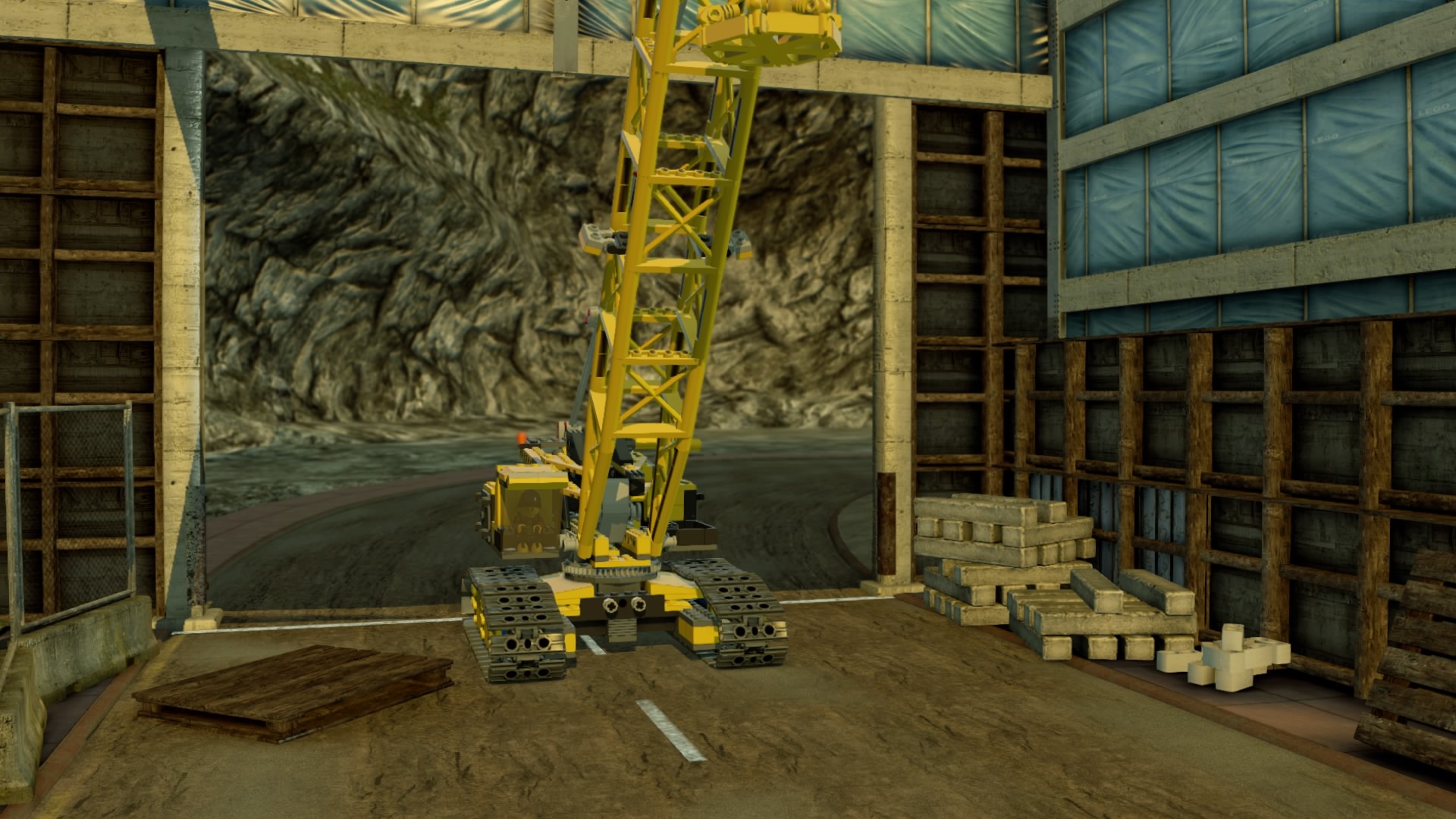 Steal a crane and escape the Construction Yard with Chase's final disguise in Chapter 12 of our full LEGO City: Undercover walkthrough.

Chase replaces a goon from Rex Fury's gang -- this time, you're assigned to infiltrate a hectic construction yard where almost everything is going wrong. There aren't any enemies to arrest, but there are plenty of puzzles.

The second area is where things get tricky. You'll have to build up a crane from scratch, using only a huge chunk of Super Bricks. Below, we'll explain where to get all the Super Bricks you need in the level. If you've been diligently collecting lots of Super Bricks around the city between levels then you can totally skip that part.


Chapter 12: The Con In Construction

Chase continues his investigation into Rex Fury's secret operation. The gang is meeting up at the construction site in Paradise Sands, and Chase is going to pull security. Chase is getting very close to the truth behind this conspiracy!

The construction area is located behind the Honey hotel. There's a special street that leads to the gate. Enter the glowing marker to being Level 12.

At the site, Chase needs to get himself a proper construction uniform. The thick-accented boss is looking for volunteers, and Chase just so happens to be available. This Arnold Schwarzenegger lookalike will help... sort of. He yells a lot, at the very least.

Push the big brown LEGO barrel out of the way of the door attached to the back-left office. Crowbar the door (Robber Disguise) and use the locker inside to collect your next uniform! Like all disguises, this one offers up a whole bunch of new powers.

That's the last disguise. Use it to repair the sparking electrical panel to the right of the locker. That reveals a bright red button - you'll need a Color Swapper, but there's nothing like that in the yard! Go to the front-right corner and smash the LEGO crate to build a Space Crate. Activate the crate with the Astronaut Disguise and Color Swapper parts will appear. Build them all!

Grab the green color for your Color Gun and shoot the bright red light to the right of the big gate. Drive the big roller vehicle onto the red LEGO pad to the right to open a second gate into the next area of the Construction Yard. 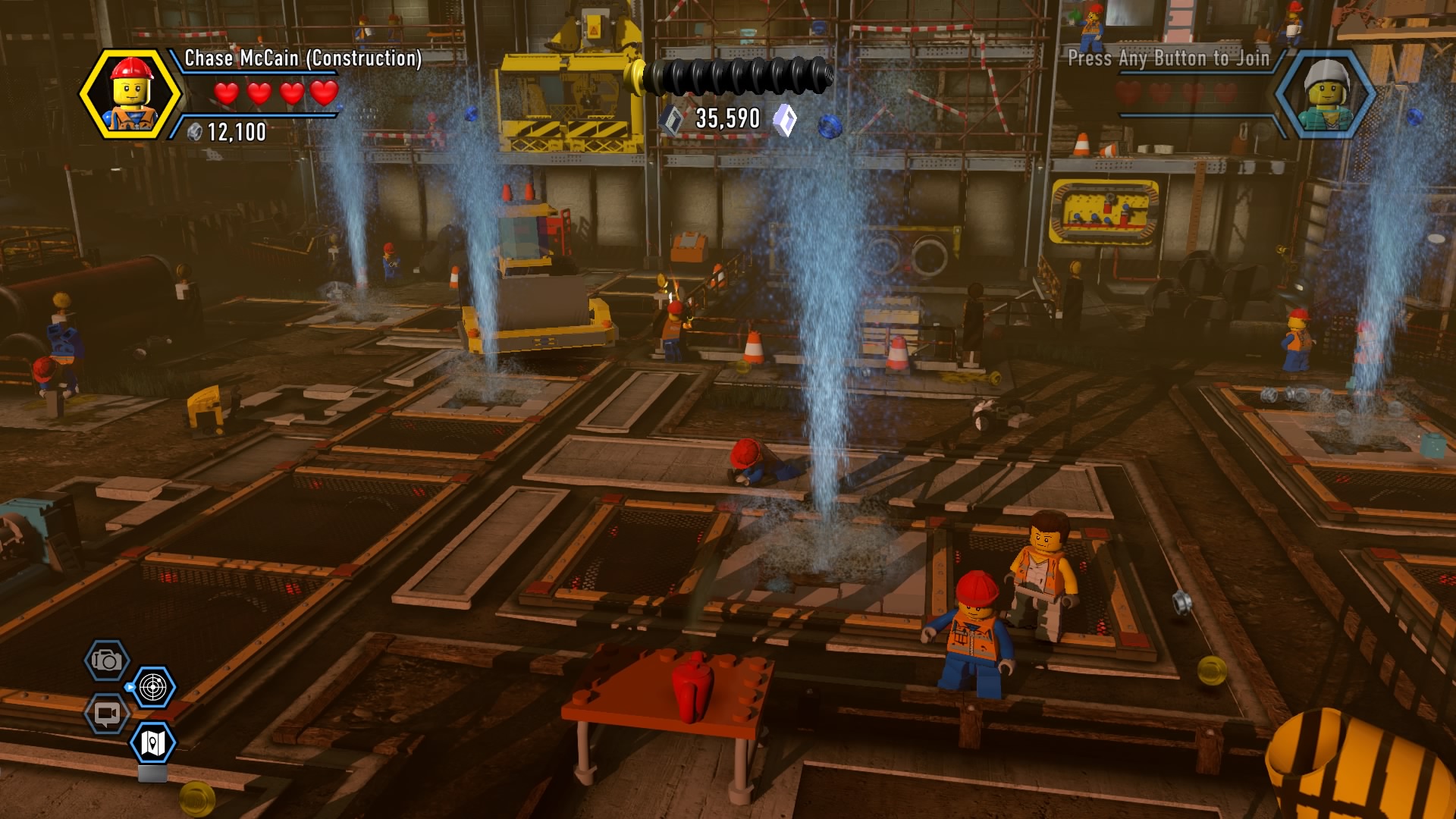 Down below, you'll need to prove your construction skills to the foreman. To do that, you'll need to break open four water pipes. The Construction Disguise comes with a cool drill that can bust through wiggling LEGO floors. Look for drill markers too.

Smash and drill all four drills to drain the water out of the flooded area. Now you can get inside and bust open that LEGO crate you couldn't reach earlier. Break it, use the Space Crate (Astronaut Disguise) and build the hopping bricks to fix the hoist controls. That activates a switch to the right - use it and construct the ladder to climb up into the tower. 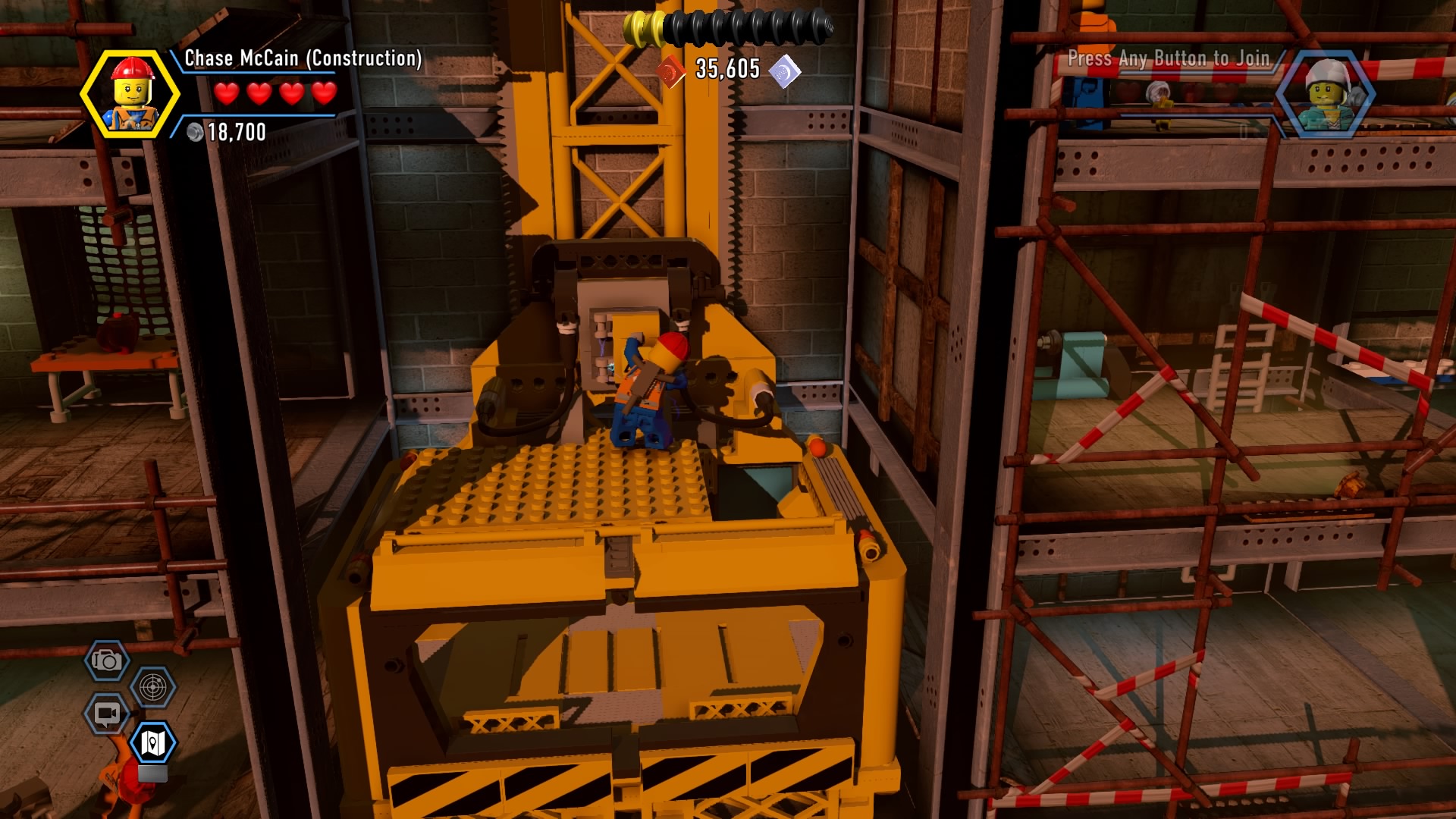 The second floor path is blocked by a LEGO wall! To destroy it, you'll need TNT. Near the wall, pull down the ladder with your grappling hook (Undercover Disguise), shimmy across and break the door (Robber Disguise) to get into the store room. Grab a TNT from the vending machine (Miner Disguise) and place it in the barrel waypoint to break the wall.

Ahead, you'll reach an unworkable elevator. Just keep going left and slide under the LEGO blue / white Free Run bricks, then grapple up to the third floor. Repair the fuse box above the yellow elevator to fix it - now you can drop back in and use the switch to ride up to the fourth floor. 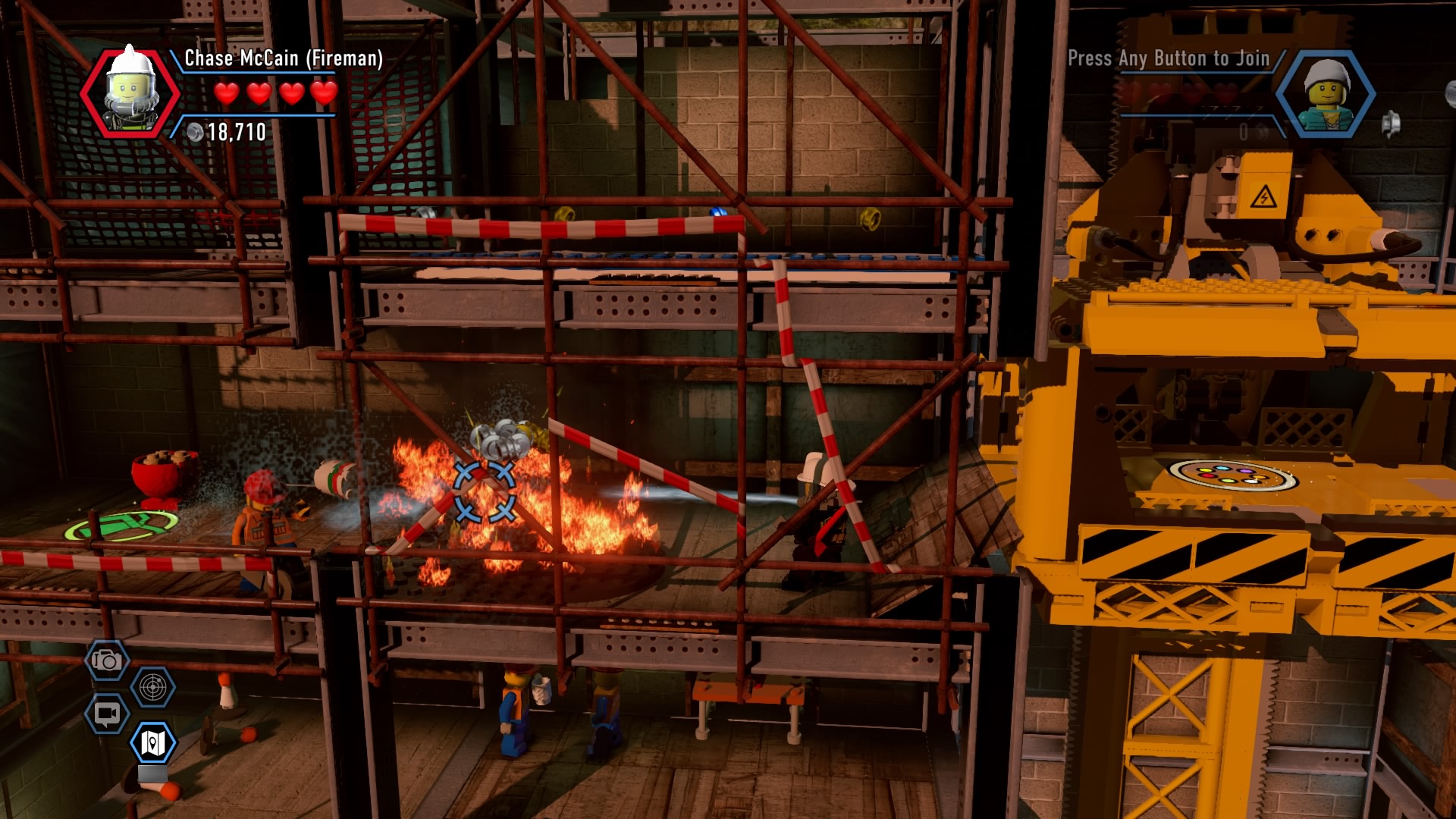 Put out the fire on the left (Fireman Disguise) and water the red potted plants (Farmer Disguise) to climb up to the fifth floor. We're really making progress, now! Run right and past the top of the elevator until you reach a gas leak. Drop through the floor hatch and smash the LEGO objects to the right of the ladder to find a valve. Turn it to remove the dangerous green gas from your path.

Cut down the wooden barriers on the exit door (Fireman Disguise) to reach the second area of the level. 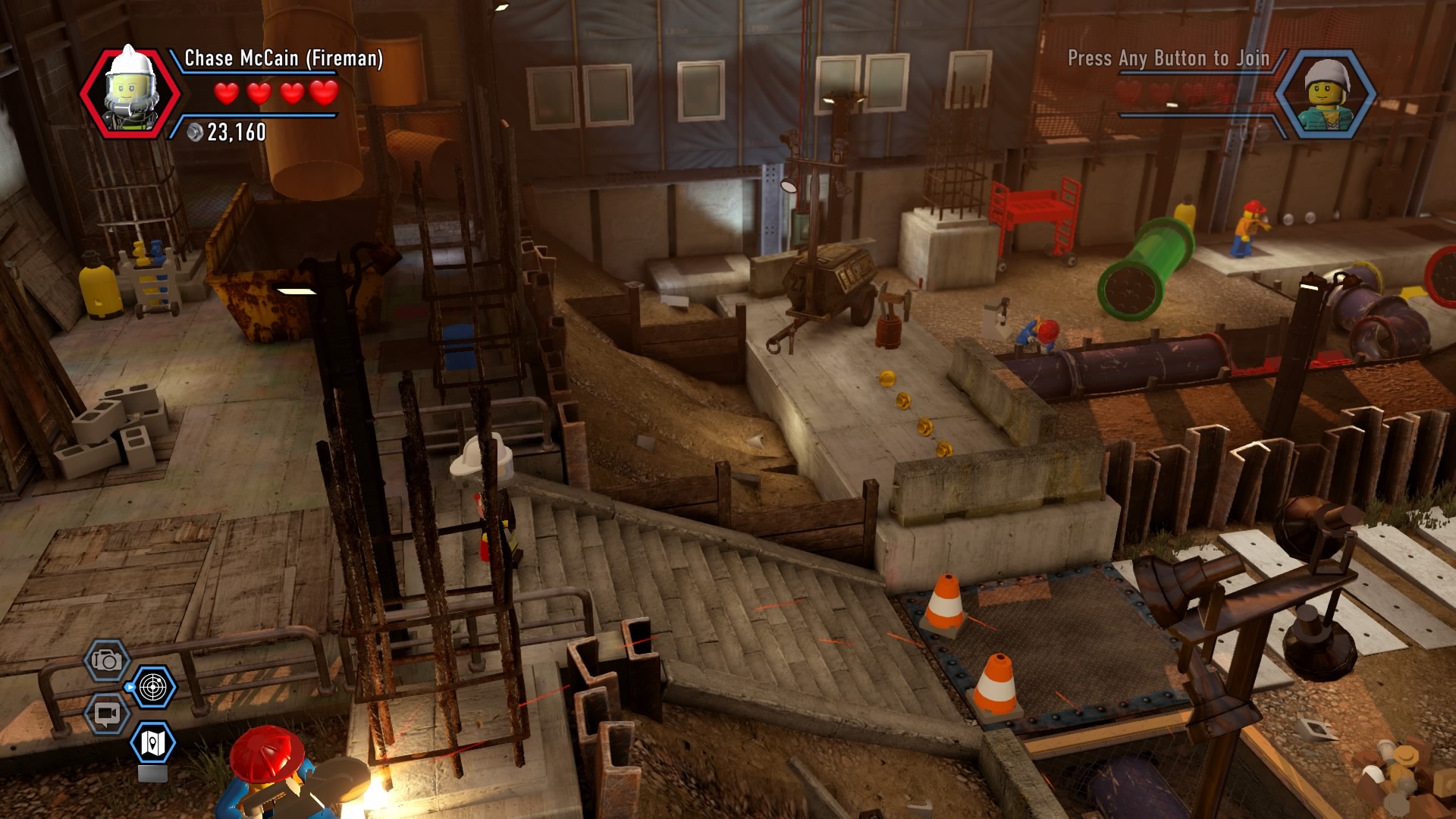 Drop through the chute and you'll encounter a new problem - the guard dog ran away with the gate key! You'll need some serious bones to take the key away from this grouchy dog. Smash the LEGO boulder next to the dog house, then follow the Detective Scan clues to find the dog bone. Place it in the bowl, and you'll be able to get the gatehouse key!

When the dog goes for the bone, grab the gatehouse key and use it on the locked door. Now that you can go inside, flip the switch to open the gate to the next area you'll need to reach. It's on the left. Inside, you'll need to complete a pretty hefty 40,000 point Super Build.

[Police Shield Part] Go down to the center of the new construction zone below and find a pile of LEGO boulders. Smash them (Miner Disguise) and use the Detective Scan marker (Undercover Disguise) to find hopping bricks in the front-right corner of the area. Build the bricks to create an RC construction vehicle - nifty! Remove all four piles of LEGO debris to earn the shield part. 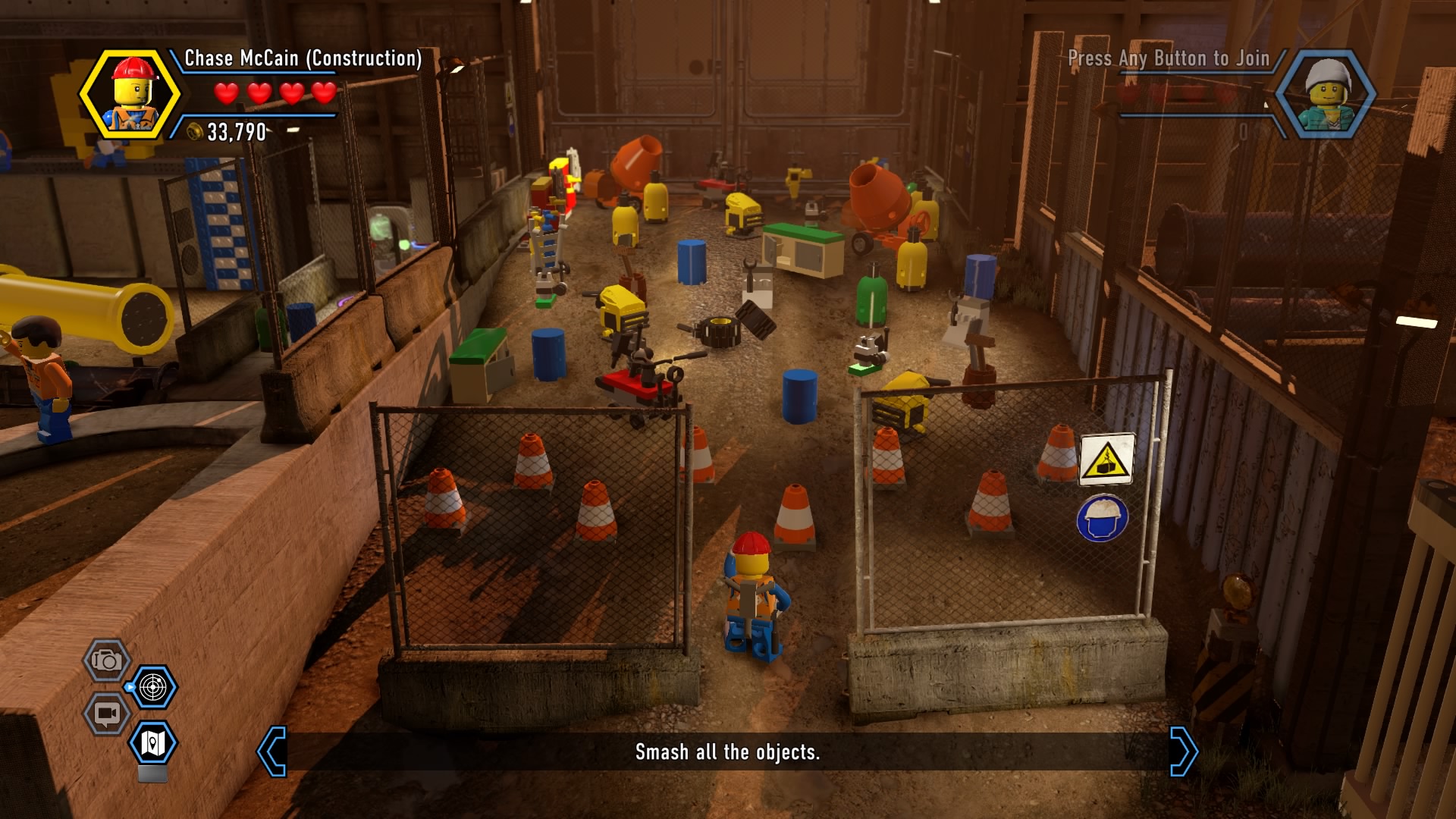 10k Super Brick: Found in the center of the second large construction yard, go toward the foreground-center and find a square of jittering LEGO gray bricks. Use the Miner Disguise to drill through, then interact with the marker to create a stream of water - ride it up to collect the Super Brick reward.

10k Super Brick: On the right side of the area, bust through the gray LEGO concrete and cut the water pipe to create a fountain. Ride it and move right to enter a small mini-game - small all the LEGO objects in the fenced-in area! Use the Miner Disguise's drill to make it even easier. When everything is broken, go and collect your hefty 10,000 Super Brick reward. 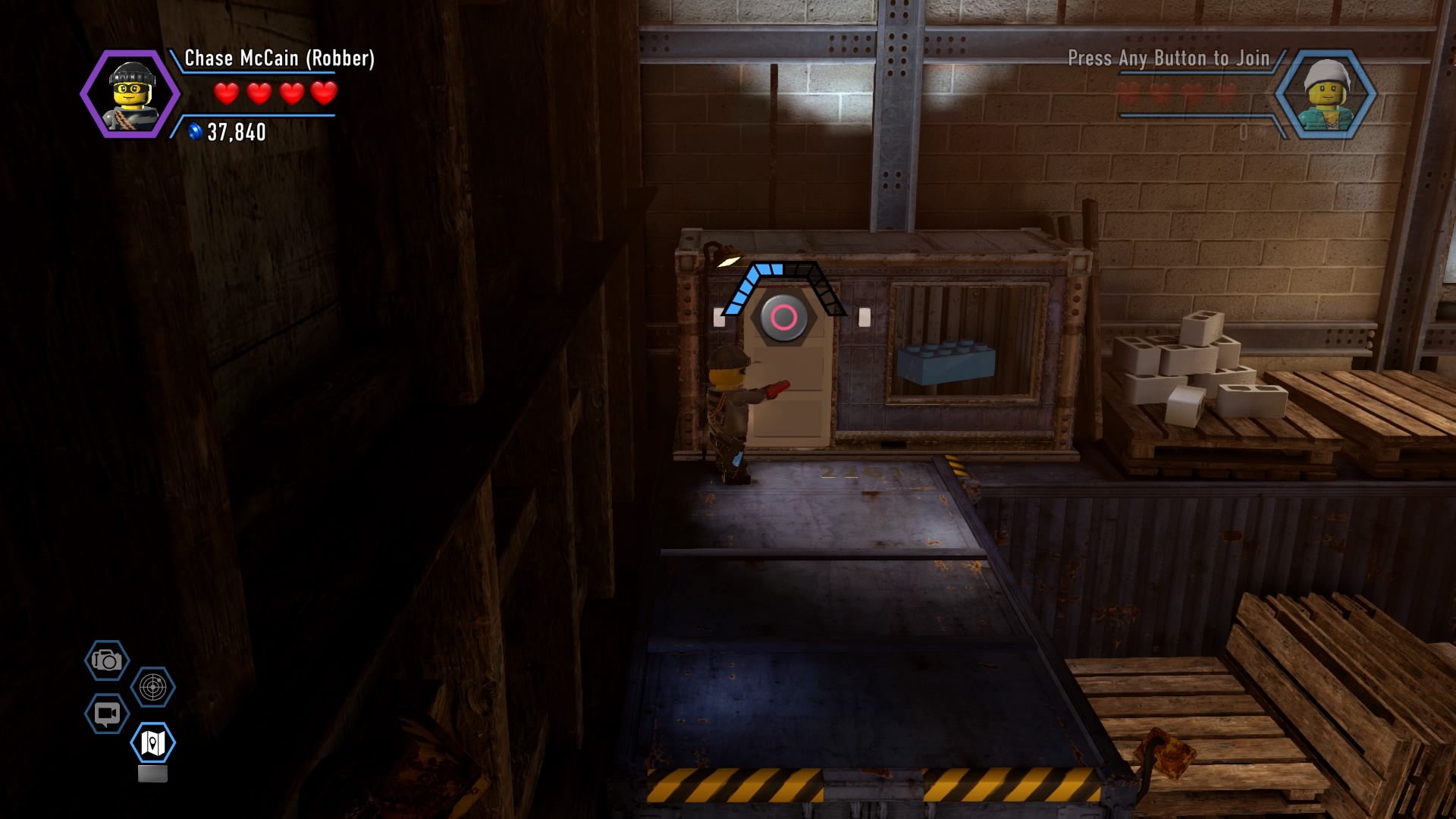 10k Super Brick: The last Super Brick you need is in the office in the back-left corner of the area with the Super Build pad. Hop up to the locked office and break the door with the Robber Disguise crowbar and this brick is all your's.

That's all 40,000 bricks you need - complete the Super Build and take control of the crane! Drive over to the right, to the big glowing waypoint marker to activate a simple puzzle. 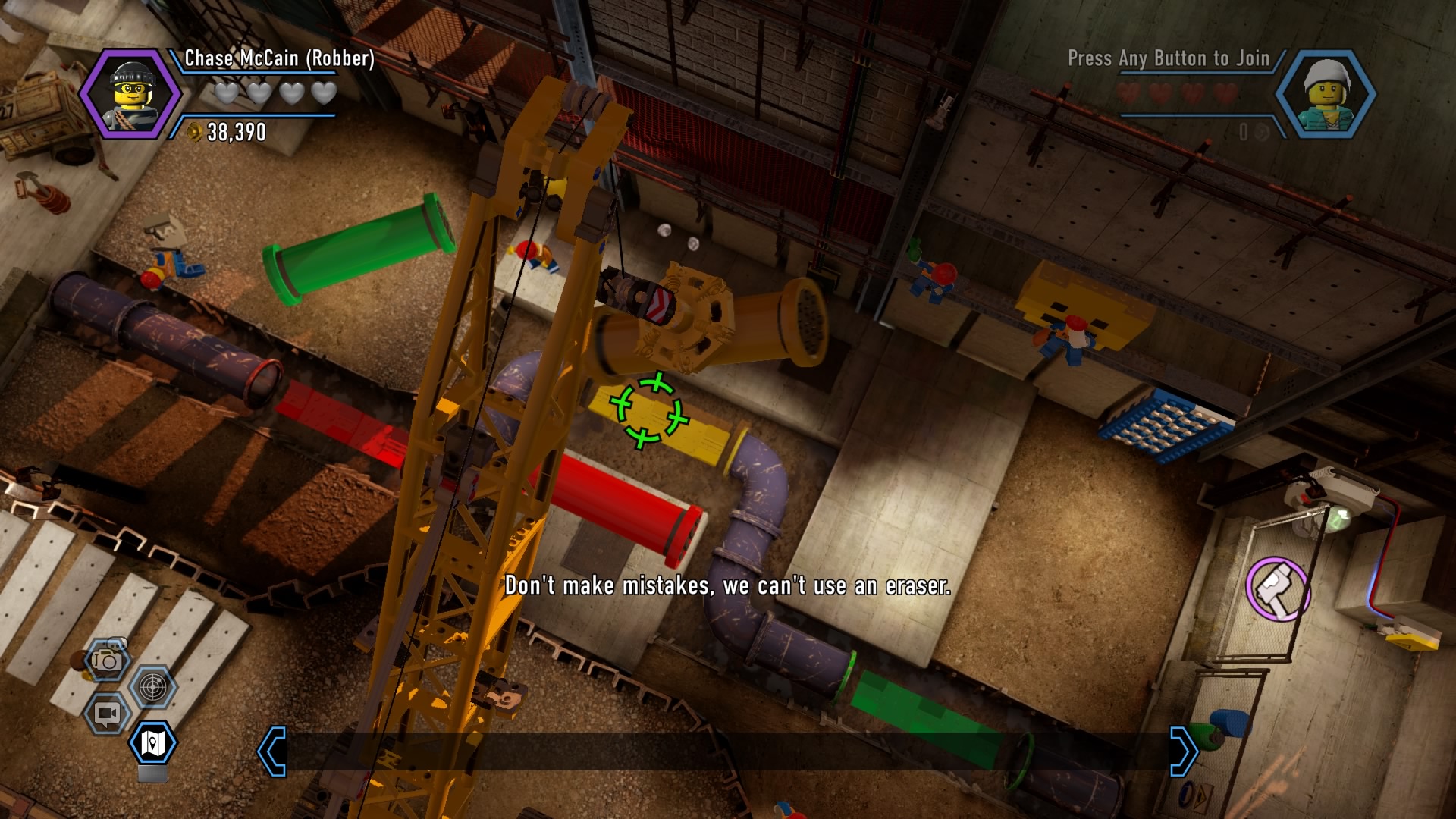 Solve the puzzle, and the foreman will wander off. It's a perfect opportunity! Time to sneak off with your crane. Drive it to the right gate. When it opens, continue down the right path to complete this construction-heavy level and continue the story.

Before Chase can track down Rex's secret base, you'll first need to visit the Observatory in Paradise Sands. Drive up there and into the marker to start a new mission - Rex wants a telescope. But this time, the theft isn't for Rex. You're getting it for the "Old Man"... but who could that be? 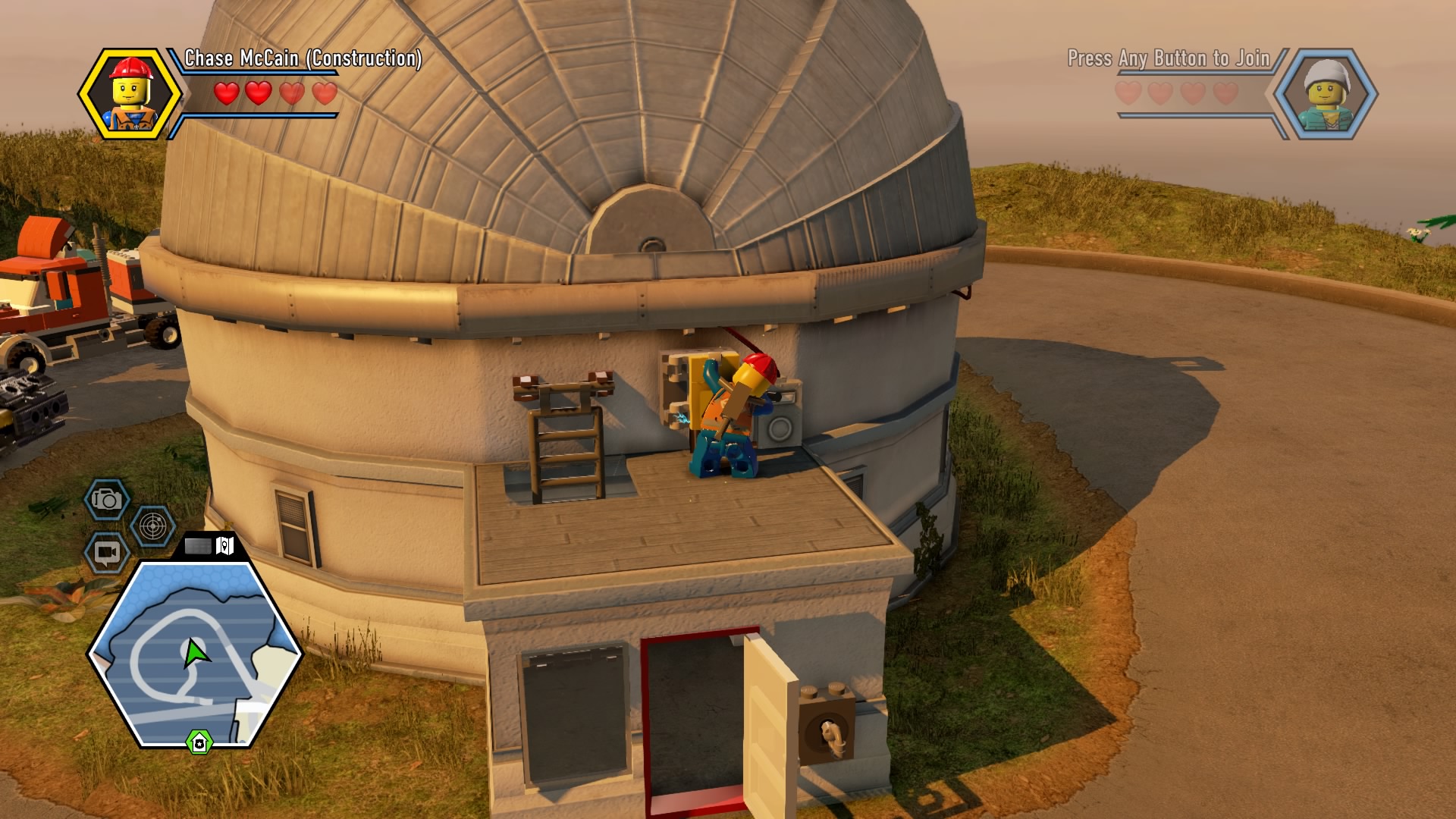 Up at the Observatory, start your next theft by smashing the LEGO rocks to the right of the structure with the Construction Disguise's pneumatic drill. There are a total of 16 LEGO objects you'll need to break to progress.

After that, the goon will drive his truck around the back of the Observatory. Defeat the four security guards that arrive and grab the key the last guard drops. Use it to open the front door of the Observatory, and climb up to the roof. Repair the broken fuse box (Construction Disguise) to open the dome. We're almost done here!

Hop into the crane, pick up the telescope and place it on the truck. The job's not over yet - the cops are swarming the streets and blocking off the roads! Follow your partner's armored truck to the drop-off point. Your truck is enormous and tiny cop cars won't stop you. Plow through everything and you'll be fine, just don't lose your helper.

When you jump the raised bridge, you're home free. The rest of the way is totally cop-free. You'll finish the mission, and the chapter when Chase enters the secret tunnel passage from the train tracks.