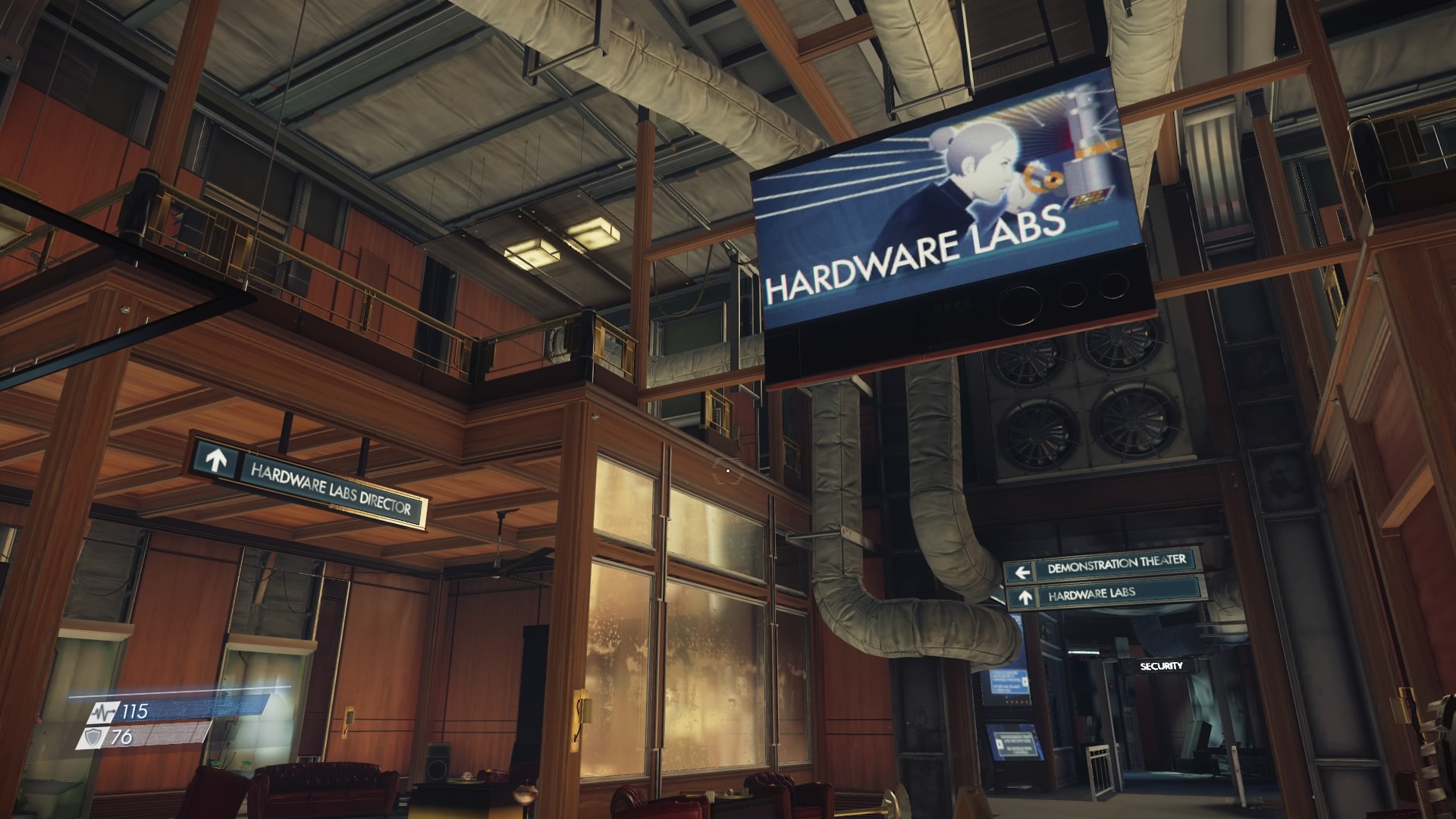 The Hardware Labs are the third major area you'll explore in Prey [2017], and there are plenty of hidden items, upgrades, and collectibles to uncover. Get all the locations (and screenshots) right here.

When the Looking Glass server goes down, Morgan Yu must go to the Hardware Labs to reboot the system. There's an important message being blocking that Morgan left for herself (or himself) -- and the only way to reboot the system is to break into the locked offices of one brilliant scientist.

It doesn't help that the area is also crawling with gooey alien lifeforms. See where to find all the employees, emails, neuromods, fabrication plans, weapon upgrade kits, and more with the complete rundown below.

Employee: Hope Ellis - Found to the left as you enter the Foyer, in the corner behind the reception desk.

Neuromod x1: In the fallen display case, to the left in the hallways just past the foyer room.

Weapon Upgrade Kit: In the weapon case, inside the security station just as you leave the foyer. Duck under the screen to get inside.

Silenced Pistol Ammo Fabrication Plan: Right next to the computer terminal in the security station. Same booth as the weapon upgrade kit.

Employee: Sean Larsen - Find the employee body in the Demonstration Theater, to the left and down the hall after leaving the foyer.

Employee Entrance Keycard: Located on the corpse of Sean Larsen in the Demonstration Theater.

Employee: Randall Wood - This corpse is located through the maintenance hatch in the Demonstration Theater. Drop down from the seats to find the hatch entrance.

Employee: Titus Kromwell - In the second floor offices, between the foyer and the atrium.

Machine Shop Supply Closet Keycode: 5492- Find this keycode on the locked computer (Hack 1) on the second floor, in the office area between the Foyer and the Atrium.

Email #1, #2, #3: Get three more emails from the terminal with the supply closet keycode.

Employee: Nickie Tannar - By the kitchen on the second floor of the foyer.

GLOO Cannon: Another GLOO Cannon is found near Nickie Tannar's body on the second floor of the foyer.

Employee: Conrad Birchman - The employee body is located on the ground, in the middle of the atrium.

Transcribe: Take the lift up to the second floor of the atrium to immediately find this transcribe near a dead body.

Employee: Miyu Okabe - Found on the second floor of the atrium, near the lifts.

Smuggler's Cache: Neuromod x1 - On the second floor of the atrium, look for the red alarm bell panel near the statue of William Yu.

Starbender Book 1: Climb up onto the lifts on the second floor and cross the scaffolding to reach a secret maintenance hatch with the first of the six collectible "Starbender" books.

Employee Aime Schmidt - Corpse with the lab keycard. Block the flames with the GLOO Cannon to reach her. Just past the Ballistics Lab door.

Medkit Fabrication Plan: On the gurney in the medbay, on the second floor of the atrium.

Emails #1, #2: Find two emails on the computer to the right as you enter the lab through the main door.

Employee: Thaddeus York - The body is found at the top of the ramp created with GLOO Cannon foam.

Transcribe #1, #2: Two transcribes are found on York's body. One can be looted, and the other is on the ground next to him.

GLOO Cannon: An extra GLOO Cannon can be collected near Thaddeus' corpse.

Neuromod x1: In a briefcase on the main Demonstration Stage.

Email #1, #2, #3: Find three emails on the computer in the room to the right as you enter through the 1F door to the Machine Shop.

Employee: Peter Coleman - Jump onto the conveyor to reach the body. Use the terminal in the booth to move the platform to the Fabrication Bay -- then you can reach him.

Neuromod x1: The corpse of Peter Coleman is carrying one neuromod. Jump up onto the conveyor hanging from the Machine Shop ceiling to get it.

Neuromod x2: Find it in the Machine Shop Storage Room. Unlock the door (Hack 1) or find the code on a locked computer terminal on the second floor, between the Foyer and Atrium.

Weapon Upgrade Kit: On a shelf in the Machine Shop Storage Room. Hack the door (Hack 1) or get the code from a locked computer in the second floor offices above the foyer security station.

Weapon Kit Fabrication Plan: This powerful plan allows you to craft Weapon Upgrade Kits. Find it in the caged chamber in the back-right corner of the Machine Shop. You'll need Leverage 3 to lift the heavy barriers over the door.

Starbender Book 2: The second collectible is found in the same caged area as the Weapon Kit Fabrication Plan.

Neuromod x1: This neuromod is on the red chair in the caged area in the back-right corner of the Machine Shop. You'll need Leverage 3 to remove the heavy barrier.

Email #1, #2 / #3, #4: There are four emails on two separate unlocked computers in the back-right corner of the Machine Shop. Climb up to the second floor using the GlOO Gun to find two computers opposite a Recycler and a Fabricator.

Artax Propulsion System Fabrication Plan: This story-critical plan is located on the desk opposite the recycler in the back-right corner of the Machine Shop 2F.

Boltcaster Ammunition Fabrication Plan: Download this from the Machine Shop computer, opposite the Fabricator.

Satellite Psychotronic Transistor: This unique item is located in the Machine Shop. To get it, repair the broken terminal (Repair 3) near the Machine Shop Supply Storage Room. When repaired, use the terminal to open the moon door and get the transistor from the satellite.

Employee Franklin Goode - The corpse is on the hanging platform at the back of the Machine Shop. Hover / jump to reach it from the Fabricator / Recycler area.

NOTE: Unlock this lab by repairing the breach failsafe in the Hardware Labs hull breach from the Talos 1 Exterior zone.

Q-Beam Laser Gun: The Q-Beam is on the pedestal in the locked beam lab. Use the outside terminal to test fire the weapon, then unlock it to take it with you.

Q-Beam Fabrication Plan: On the Phantom locked in the Blackbox Lab. Use Mimic to slip into the partially-open maintenance hatch. Another plan can be downloaded from the workstation in the locked lab.

Neuromod x2: Find two individual neuromods in the secret compartment in Calvino's workshop. Grab the red tumbler and place it on the weight on the work table to the right of the steps to Calvino's office.

Emails #1, #2, #3: There are three emails to check on Dr. Calvino's computer in the raised office area in his personal workshop.