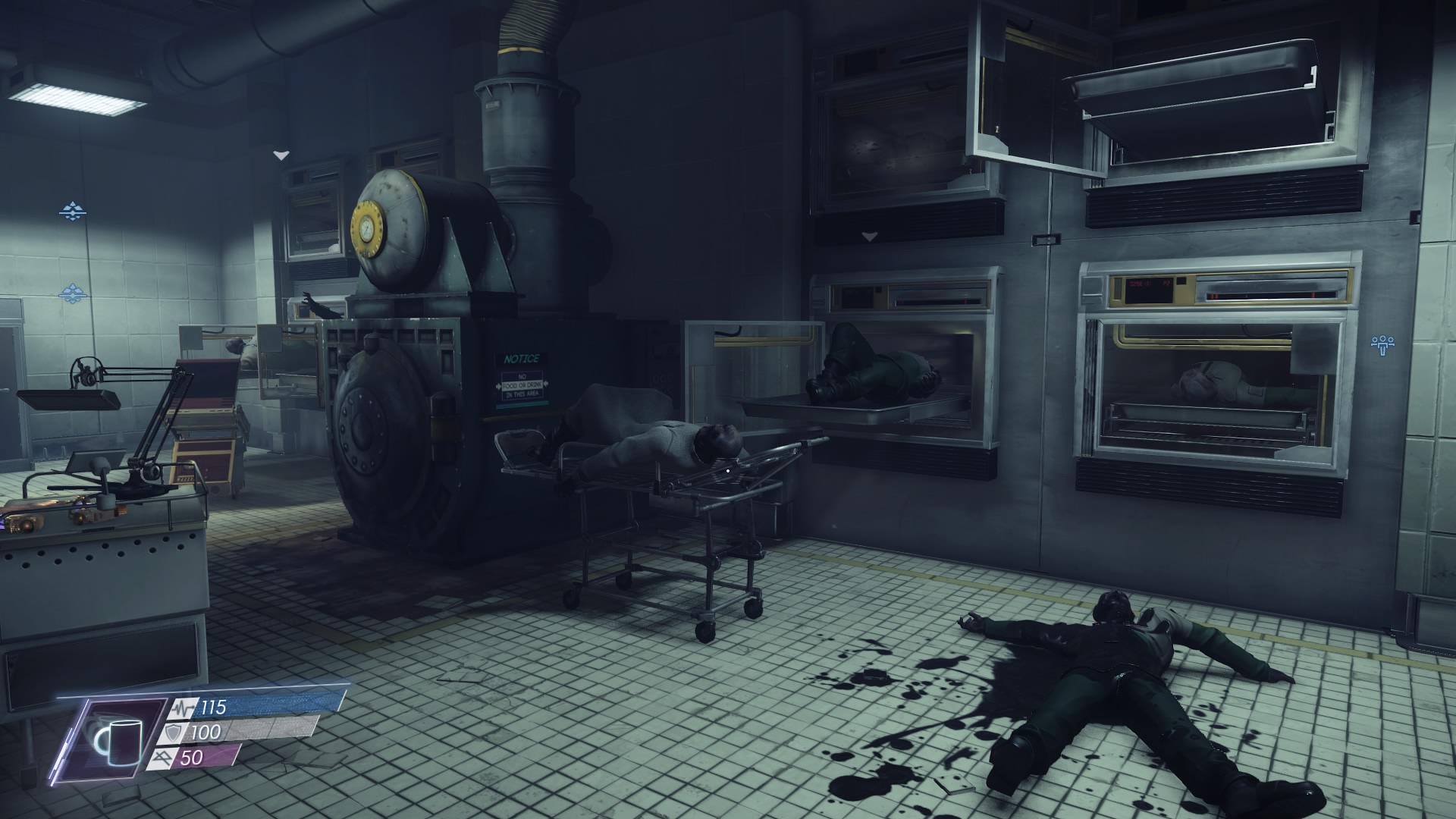 Get all the fabrication plans, upgrade kits, Neuromods and collectibles available in Psychotronics section of Prey [2017].

The Psychotronics research lab is the fourth location that unlocks as you explore the Talos 1 station. It's also where you'll unlock powerful Typhon abilities -- mimic is the most useful for exploration. This supernatural power lets Morgan Yu take the form of any tiny object in the environment, making it easy to slip through tiny holes and barriers.

Psychotronics introduces other important mechanics, and that means it's even trickier to enter certain areas. To get started, we recommend you start with Mimic if you want to access locked rooms.

Employee: Otto Lauda - The body is in the very first room of Psychotronics (Talos 1 Lobby door) in the lower, red-light section of the circular chamber, right before entering the Security Station.

Email #1: One email is in the Security Station booth. Unlock the door with Hack 2. The workstation is open -- don't forget to download the area map!

Weapon Upgrade Kit: A weapon upgrade kit is next to the workstation, in the Security Station booth.

Employee: Allison Brady - Found in the Men's Clean Room Preparation area, near the large hole in the floor.

Employee: Janos Jozsef - Find this corpse in the maintenance area through the hole in the Men's Clean Room Preparatation area.

Psychoscope: The Psychoscope, a special item that allows you to scan Typhon creatures, is located next to Janos Jozsef's body in the maintenance area.

Email #1, #2, #3, #4: There are four emails on Dr. Kelstrup's workstation. From the specimen containment chambers, enter his office through the left window.

Employee: Hans Kelstrup - Dr. Kelstrup is behind his desk, in the Director's office.

Hans Kelstrup's Cabin Keycard: Find this keycard to the Crew Quarters cabin on Dr. Kelstrup's body in the Director's Office.

Director Kelstrup's Office Keycard: The keycard to the office itself is also located on Hans Kelstrup's body.

Neuromod Fabrication Plan: The fabrication plan is in the Director's Office safe. Alex Morgan will send you the code during the "Detour" quest.

Transcribe: Located in the hidden Looking Glass Station. Use Hans Kelstrup's workstation to open the door to the hidden chamber.

Employee: Evan Avery - Found in the Labs A room, just outside the sealed office of Annalise Gallegos.

Employees: Annalise Gallegos, Cory Richard - Both of the corpses are located in Gallegos's sealed office.

Transcribe: Found on Annalise Gallegos's body, sitting at her desk.

Neuromod x1: The Neuromod is on the desk near Annalise's workstation.

Email #1, #2: Two emails are on Annalise's computer. You'll need Hack 1 to access them.

Transcribe: Just outside Labs B, look through the window to the locked office of Mitsuko Tokaji. The transcribe is on the desk.

Weapon Upgrade Kit: Found on Mitsuko Tokaji's desk in his office. Unlock the Mimic skill to copy a small item and squeeze through the barred window. Place a crate near the window when transforming to easily roll inside.

Email #1, #2, #3: Three emails are on the workstation in Helen Barker-Combs's office, next door from Tokaji's office.

Employee: Rory Manion - Found in the hallway behind Labs B, near the Behavioral Biometrics lab.

Transcribe: Loot Rory Manion's corpse to get this transcribe log.

Email #1, #2, #3: Check the emails on the unlocked workstation in this small side-lab near Lab B.

Neuromods X2: There are two Neuromods next to the locked Labs B-3 door in the Behavioral Biometrics wing.

Armory Keycode: To get the Armory keycode, release the prisoner inside the locked containment unit in the Material Extraction area.

Employee: Kristine Lloyd - Located near the sealed door to the Subject Holding room.

Transcribe: The transcribe is on Kristine Lloyd's body.

NOTE: There are two ways into the Armory. Use the Mimic ability to slip through the tiny reception desk window opening, or release the prisoner in Materials Extraction. He'll give you the keycode.

GLOO Cannon: On the armory floor.

Neuromod X1: Next to the GLOO Cannon on the Armory floor.

Shotgun: On the shelf, in the Armory.

Silenced Pistol Fabrication Plan: On the shelf in the Armory.

Shotgun Shells Fabrication Plan: Also on the Armory shelf, right next to the Silenced Pistol plans.

Employee: Two employees are in the Live Exam room, but you'll only be able to examine one. One is outside the containment unit, the other is inside. Use the workstation terminal -- the second employee will become a creature. Destroy it!

Psi Hypo Fabrication Plan: The dead scientist outside of the containment unit in the Live Exam room is carrying these plans.

Email #1, #2: In the back-left corner of the morgue, there's a computer. Access it to get the two emails.

Anti Rad Pharma Fabrication Plan: On the desk in the back-left corner of the Morgue. There's a broken turret deployed right next to the corner desk.

Sylvain Bellamy's Cabin Keycard: Get this keycard off the body of Sylvain Bellamy in the morgue. Use the Mimic ability to slip through the barred glass.

Neuromod x2: There are two Neuromods on the crash cart in the locked morgue.

Morgue Keycard: The keycard for the locked storage room in the morgue is located on the crash cart, next to the pair of Neuromods.


Check out more Prey guides on The Escapist with the links above.
Related to:
kevin thielenhausguidespcprey 2ps4shootervideo gameswalkthroughwalkthroughsxbox one
0
Tweet