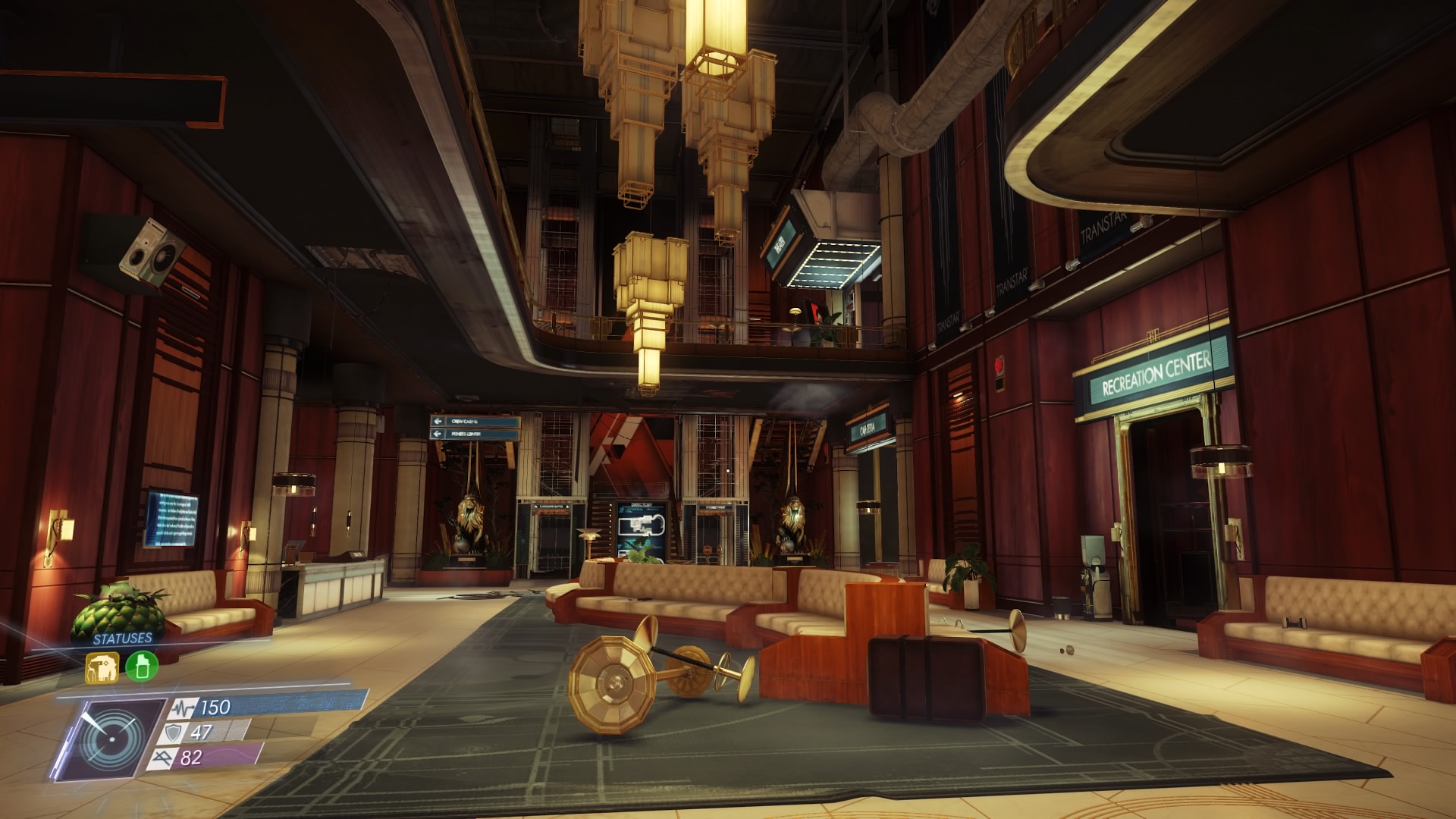 Uncover just about everything worth finding in the complex Crew Quarters area with these Prey [2017] collectible and item locations.

The Crew Quarters isn't necessarily the biggest area, but it is the most dense. There are locked rooms everywhere, and each one is filled with goodies. Keycards, keycodes, Neuromods, Weapon Upgrade Kits, even powerful weapons can be scavenged in the Crew Quarters. You'll also have to deal with tons of mind-controlled individuals, making it trickier to track down the huge amount of employees.

Check out all the locations (we've found so far!) in the text and gallery below.

Employee + Stun Gun: Patricia Wong - From the main lifts, turn right to find her body on the path to the Cafeteria. There's a Stun Gun located near her.

Employees (Mind-Controlled): Jillian Quig, Phong Vu - Appear in the lobby after meeting with the Cook for the first time in the cafeteria.

Employee (Phantom): Regina Sellers - Find her in unlocked "Authorized Personnel Only" room on the second floor.

Secured Pharmaceuticals Keycard: Found on the Regina Sellers phantom, in the recycler room on the second floor of the lobby.

Grav Shaft Keycode 7375 - Found in the "Authorized Personnel Only" room with the recycler on the second floor of the lobby. Look on the sticky note attached to the work table.

Weapon Upgrade Kit: On the shelf opposite the recycler in the small second floor room.

Employee: Mike Turner - The corpse is on the second floor walkway inbetween the recycler room and the Yellow Tulip.

Employee: Brett Seydel - Near a broken turret, on the second floor balcony accessible from the Recreation Center.

Employee: Don Davis - Dropped down in the Executive Suites lift after meeting with the Cook.

Transcribe: Download from the workstation in the first booth, visible from the blocked entrance to the RC from the lobby.

Employee: Bruce Cobb - Corpse near the fallen table, on the first floor of the Recreation Center.

Employee (Mind-Controlled): David Branch - This mind-controlled employees first wanders the balcony on the second floor of the Recreation Center.

Abigail Foy's Cabin Keycard: Located on the large conference table on the second floor of the Recreation Center.

Employee + GLOO Cannon: Eve Coolidge - Found in the maintenance hatch on the second floor of the Recreation Center. Use the GLOO Cannon to create a path from the upper floor windows and break through the GLOO build-up to find her.

Employee: Joseph McSorley - This headless body is in the GLOO foam to the right of the front desk.

Employee: Colette May-Schultz - Corpse in the center of the cafeteria. Easy to spot from the large bloodstain on the floor.

Employees: Neil Warnes, Chris Wade, Dan Billingsly - Three dead employees are near the windows, to the back-left from the lobby entrance.

Employees: Kade Mason, Franz Klinger - Two more employees are near the window where Will Mitchell, the cook, talks to you.

Employee: Will Mitchell "The Cook" - You'll encounter this employee the first time in the kitchen.

Will Mitchell's Cabin Keycard: Found on the kitchen window after meeting with "The Cook" for the first time.

Freezer Keycode: 9971 - Repair the regulator or collect one from the Arboretum greenhouse and the cook will give you the code to the freezer door.

Kitchen Access Keycard: Carried by "Will Mitchell", the cook.

Neuromod x1: One Neuromod can be scavenged off the cook's body if you knock him unconscious or kill him.

Employee + Transcribe: Abigail Foy - Find Abigail in the back-left room, in the freezer. Her transcribe has another voice sample available.

Employees: Chloe Burgees, Kevin Sabian - Two dead employees can be found in the second room on the right, in the freezer.

Q-Beam: An extra Q-Beam laser weapon is in the second room to the right, inside the kitchen's freezer.

Neuromod x3: There are three Neuromods in a pack directly above the Q-Beam in the freezer area.

Neuromod x3: The last useful item available to collect in the Mail Room.

Employee + Stun Gun: Keira Whitman - Corpse found on the booths to the right as you enter the Yellow Tulip bar.

Yellow Tulip Supply Closet Keycard: Found on the "Tizzy" Operator, behind the bar at the front of the Yellow Tulip.

Employee: Guy Jameson - In the back-right room of the Tulip.

Neuromod x3: Inside Sylvain Bellamy's cabin. Find his body (with the card) in the Psychotronics morgue. You'll also find a chipset on his desk.

Email #1: Check the computer in Sylvain Bellamy's cabin for one missing email. You can also download Typhon research to unlock abilities.

Recycler Charge Fabrication Plan: Found in J. Thorstein's cabin, on the desk next to a chipset.

Weapon Upgrade Kit: Next to the bed in J. Thorstein's cabin.

Email #1, #2: There are two repeat emails on J. Thorstein's computer terminal, in his cabin.

Employee: Elizabeth Bay - Found on the couch opposite the door to DeVries's cabin.

Employee: Mathias Kohl - The body is sitting in a chair in Devries's cabin.

Anti-Rad Pharma Fabrication Plan: The plan is on the bed in DeVries's cabin.

Neuromod x1: One Neuromod is on the desk next to Danielle Sho's terminal.

Transcribe: There are two transcribes in Danielle Sho's cabin. One is broken next to her bed and requires Repair 1 and 1 spare part. The other can be downloaded from her computer.

Neuromod x1: This neuromod is on the desk in Abigail Foy's apartment.

Calvino's Safe Keycode: 0523 - Available on the note on Calvino's desk in his cabin.

Transcribe #1, #2, #3, #4: There are four messages in the "LG Visor Prototype" entry on Calvino's computer, in his personal cabin.

Neuromod x3: Find the safe hidden behind the Looking Glass screen in Calvino's cabin. Use the code from the note on his desk to collect the trio of Neuromods.

Fitness Center Keycode 0555 - Another fitness center keycode can be found in the restroom, down the hall in the Crew Cabins B area.

Transcribe: Find it on the desk in Will Mitchell's cabin.

Email #1, #2: There are two emails on Will Mitchell's computer. Use Hack 1 to unlock the terminal.

Employee + Transcribe: Maliah Fowles - The body is on the floor, in the first row. She's carrying a transcribe.

Transcribe: There's a second transcribe in the habitation pod just next door from Maliah Fowles' location.

Transcribe: A third transcribe is in the pod directly above the previous location. Use the GLOO Cannon to create a put to reach it.

Shotgun + Silenced Pistol: Find a stash of weapons in Sarah Elazar's cabin. You can enter early with Leverage 3 -- move the heavy object blocking the maintenance hatch.

Artemis Golden Pistol: The shiny, gold pistol is located in Jada Marks's safe. Complete the quest to locate the keycode (starting from the body under Alex Yu's office) or hack the safe with the Hack 4 skill unlocked.

Email #1, #2: There are two emails on Hans Kelstrup's computer, in his cabin.

Neuromod x1: On the lower shelves of Dayo Igwe's desk, in his cabin. There's a chipset in the conjoining shelf.

Email #1, #2, #3: Three emails are available on Mikhaila Ilyushin's computer terminal. To get inside her cabin, you'll need Mimic 1 to slip through the broken door.

Employees: Gary Snow, Oliver Benoit - Both corpses are in the hallway leading to the empty pool on the first floor of the Fitness Center.

Employee (Mind-Controlled) + Transcribe: Emma Beatty - Wanders near the stairwell at the entrance to the Fitness Center. Carries a transcribe audio log.

Employee (Mind-Controlled): Ike Stewart - Find him in the locker room.

Email #1, #2: There are two emails on the workstation computer in the back-left corner of the workout room.

Executive Suites Keycode: 7375 - There's another opportunity to find the Executive Suites keycode here. Check the emails on the workstation in the second floor Fitness Center room.

Deep Storage Safe Keycode: Get the code from Danielle Sho from the window. She'll appear after you kill "Will Mitchell", the fake cook, and listen to the transcribe on Abigail Foy's body in the freezer.

Neuromod X2: On the desk in Morgan Yu's cabin.

Neuromod Fabrication Plan: Also on the desk, near a bonus chipset item.