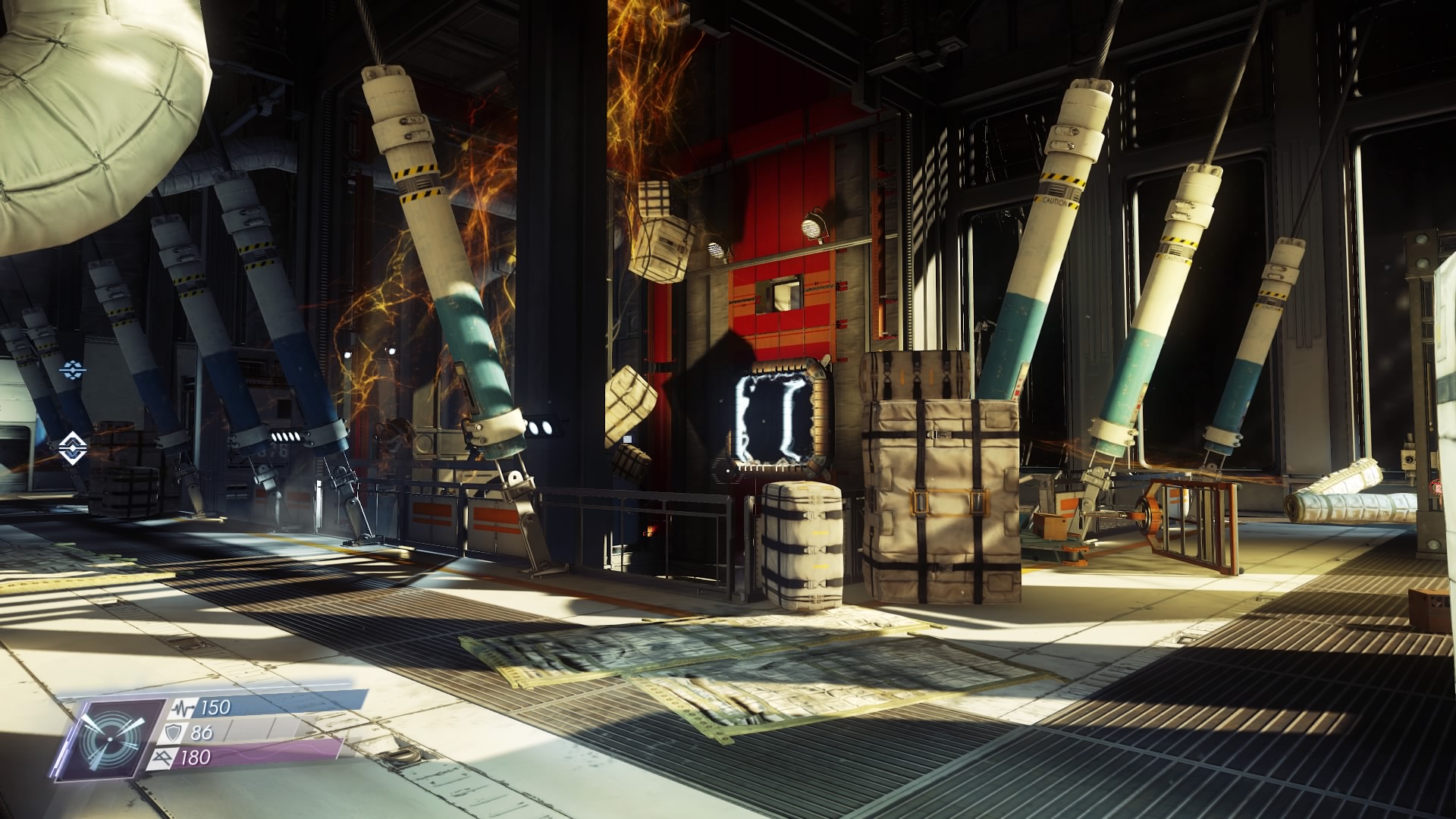 Collect up everything in the Cargo Bay with our continuing look into all the item locations for Prey [2017].

The Cargo Bay is a relatively small storage warehouse with three major sections, and one action-packed main story quest. You'll have to fight a small army of Typhon to gain access to the riches of Cargo Bay B, but there's more to explore -- you can collect a rare Fabrication Plan from the safe in the Talos 1 Exterior that allows you to construct the powerful portable turrets.

Unlike most areas, there's also a large group of survivors in the central zone. Depending on your actions, you can either rescue some of these survivors, or let them die a horrible death. Like most things in Prey, it's all up to you.

The Cargo Bay features a large population of living crew members. Find them all in the sealed section of Cargo Bay, and some don't stay in the same place for long, so we won't explain there locations here.

Weapon Upgrade Kit: In the sealed cargo container dock to the left of the main white door, in the first large room you enter. Fly to the left-most container (Number 06) on the map and open the hatch with the button. There's a turret and a weapon kit inside.

Weapon Upgrade Kit: Found in a red toolbox near the Cargo Power Control room door. There's also a chipset in this container.

Silenced Pistol Fabrication Plan: On the dead body of Ash Lasair, under the wrecked cargo lift in the Staging Area.

Email #1, #2, #3: Three emails on are on the computer in the first floor of Shipping and Receiving, near the door to Cargo Bay A.

Starbender Volume #5: The book is in the small maintenance closet opposite the Medbay on the second floor.

Smuggler's Stache: A stache of items is located in the Cargo Shipment Control Center. Hit the red bell on the wall three times to open the secret compartment and collect the contents -- it includes a Weapon Upgrade Kit, a Neuromod, and an EMP Charge.

Email #1, #2: There are more emails on the unlocked computer, in the Cargo Shipment Control Center office on the second floor.

Transcribe: On the desk to the right of Sarah Elazar, on the second floor of the Shipping and Receiving area.

Neuromod x4: To the left of Sarah Elazar's position in the Quartermaster's Office.

Weapon Upgrade Kit: Inside the caged area of the Shipping and Receiving room between the two cargo bays. Move the heavy cargo on the second floor to find an open hatch (Leverage 3) then drop down to get this kit.

Cargo Bay B Keycard: On the body of Sarah Elazar, in the Quartermaster's Office.

Neuromod x1: In a red toolbox, in the corner of Cage 2. Hack the terminal next to the Cargo Bay A door, then move the heavy crates (Leverage 3) to get inside.

Employee: Diane Washington - A dead employee is on a high platform, near the entrance to the Fuel Storage Bay.

Weapon Upgrade Kit: Found in a red / white bin at the top of the Fuel Storage Bay, on the tall metal shelves. Climb up to the tap from the lift with the dead employee to reach it.

Employee: Gerard Wildman - This corpse is on the tall metal shelves just beyond the blue flame jets. Climb to the pipes at the top of the room and look left as you walk over the flames to spot this body.

EMP Charge Fabrication Plan: The dead body of Gerard Wildman, on the high metal shelves in the Fuel Storage Bay, is carrying this plan.

Employee (Phantom): Enoch Kouneva - One of the many phantoms in Cargo Bay B is a former employee.

Transcribe: On the desk with the workstation, to the right from the main entrance into the Cargo Bay.

Weapon Upgrade Kit: Inside container #8120 in Cargo Bay B. Use the workstation and input the container number to unlock it.

Shotgun Fabrication Plan: Also inside container #8120 in Cargo Bay B.

Employee Christopher Smith - In the back left corner of the Cargo Bay B area, near a large white door.

Weapon Upgrade Kit: Located in a container, inside container #7040.

Weapon Upgrade Kit: Another is found at the very top of the metal shelves in Cargo Bay B. Climb up to the top to spot a small red container.

Weapon Upgrade Kit: Yet another upgrade kit can be collected in container #9171. Use Hack 1 to open it.

Employee: Quinten Purvis - Locked in the container. Use Hack 2 to open it and find his body, along with a large cache of supplies.

Email #1: On the Cargo Bay Processing workstation, on the walkway to the microgravity field. You won't be able to access it until you bypass the Director Level lockdown.

Portable Turret Fabrication Plan: This rare plan is locked inside a safe, inside a destroyed office connected to the dock access into the Cargo Bay. Use Hack 3 or get the code from Sarah Elazar.