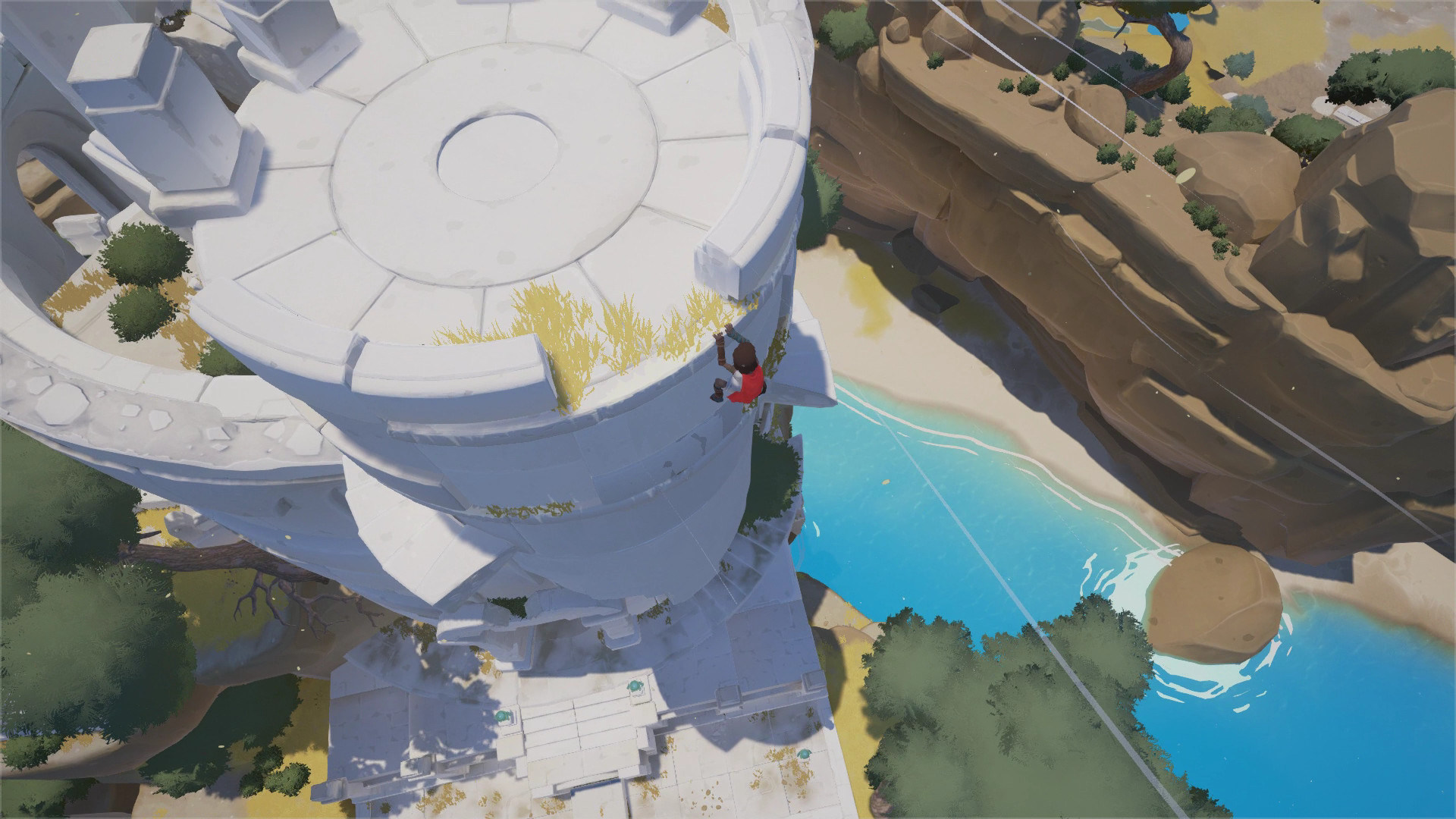 Track down all the toys, emblems, outfits and Lullaby shells with the complete collectibles locations for RiME's opening chapter.

Chapter 1 Denial sets players off on a journey across a mysterious island and toward the massive tower in the far distance. Along the way, you'll solve puzzles and overcome obstacles using a pretty limited set of skills.

All the collectibles are hidden in pretty out-of-the-way areas. You'll have to really dig into each location to get them all. They're worth it -- if anything, just to relax and spend a little bit more time in the relaxing world of RiME.

Outfit #1: Automatically unlocked at the start of the game.

Lullaby Shell #1: The first shell is on the high cliff above the beach you start on. From the beach, go right (instead of left) and through the caves, then climb the rocky ledges up until you can spot a jutting rock to the left. Each Lullaby Shell is on a glowing pedestal, so they're not too hard to find.

Emblem #1: From the glowing statue on the right, enter the narrow canyon path to find this emblem below. Like the shell, it is also on a pedestal, on the rocks overlooking the path to the statue valley puzzle.

Toy #1: The Fox - This toy is in a dim cave behind the glowing statue guarded by the boar. Enter the out-of-the-way ledge and jump across the gap, then climb up and look left. This is on the path to the white tower with one of the four statues.

Toy #2: The Seagull - From the four statues in the valley, go up the hill path behind the stream and to the left. This leads to an optional island of cliffs. Jump across to reach the ruin, then use the ramp-like fallen stones to climb up and around the pillars to get to the toy on the pedestal.

Emblem #2: After solving the fox statue puzzle and opening the first door, you'll reach a canyon path with a stream. Instead of following the stone path, look right for a family of boars. Jump down and they'll run away -- follow them to find this emblem pedestal.

Emblem #3: Once you drop down and meet the fox in a cutscene, go up the hill to the door with three spirit locks. Go left from the locked door to find a walkway leading to an area with this emblem pedestal.

Toy #3: The Boar - Open the door with three spirit locks then look right. There's a cave path blocked by spiky brambles. The kid can't get through, but boars can. Grab a fruit nearby and lead a large boar toward the brambles, then throw the fruit into the brambles bush. The boar will bust through, creating a path to this hidden toy collectible.

Emblem #4: From the keyhole device (where you'll line up the door pieces) go left to find a simple path that leads to an emblem pedestal.

Outfit #2: Back at the keyhole device, go right to find a hidden cave path lit with blue flame. There's a dirt path leading to the cave, which is obscured with bushes. Follow the steps down, find the right path and use the rock ramp (marked with a tree) to jump to the island. Climb up and into the ruin to find this costume.

To unlock this secret trophy / achievement, go down to the beach from the keyhole device puzzle, near the path to the collectible outfit island. From the rock ramp, look right to spot a waterfall on the beach.

Behind that waterfall, there is a tiny blue ancient treasure. Pick it up and take it back to the cavern path -- but continue left instead of going back up. In the sea cave, there's a disabled robot. Give the glowing orb to the machine (shout / drop while standing near it) to unlock this achievement / trophy.

Lullaby Shell #2: After solving the second keyhole puzzle, follow the balcony up and toward the next room. You'll find a box near what looks like a sealed door. Go back to the balcony to find some hard-to-spot handholds. Drop down and shimmy across, then shout to open the soul door. Drag the box through the new doorway and use it to reach the high ledge. Climb the vines and cross the bridge to find this secret shell.

Keyhole #1: In the same area as the Lullaby Shell, follow the stone steps up to an area with your first keyhole.

Outfit #3: Before entering the massive tower, stop at the glowing door and go right. Drop down onto the area below, and go to the back to find a hidden passage leading away from the tower. In the secret room, you'll find the third outfit.

Emblem #5: Inside the tower, you'll enter a ring-shaped room with soul pots blocking passages. Move left around the ring until you find a fallen statue. Use the ramp to reach the high ledge, and follow it around, back toward the entrance and toward a few peaks. Jump across and enter the door. There's an emblem in the extremely dark room.

White Shade #1: The first white shade is in the dark chamber near the end of the chapter. In the massive room where the floor lights up, move left along the exterior rim until you spot stairs outside the normal path. You'll need to jump to the stairs, climb up, then hop across the darkness to reach the first (of four) shades.


That covers all the collectibles in Chapter 1. There are plenty more to find in future chapters, and we're covering them all.
Related to:
kevin thielenhausfamily-puzzleguidepcps4rime agevideo gameswalkthroughxbox one
0
Tweet