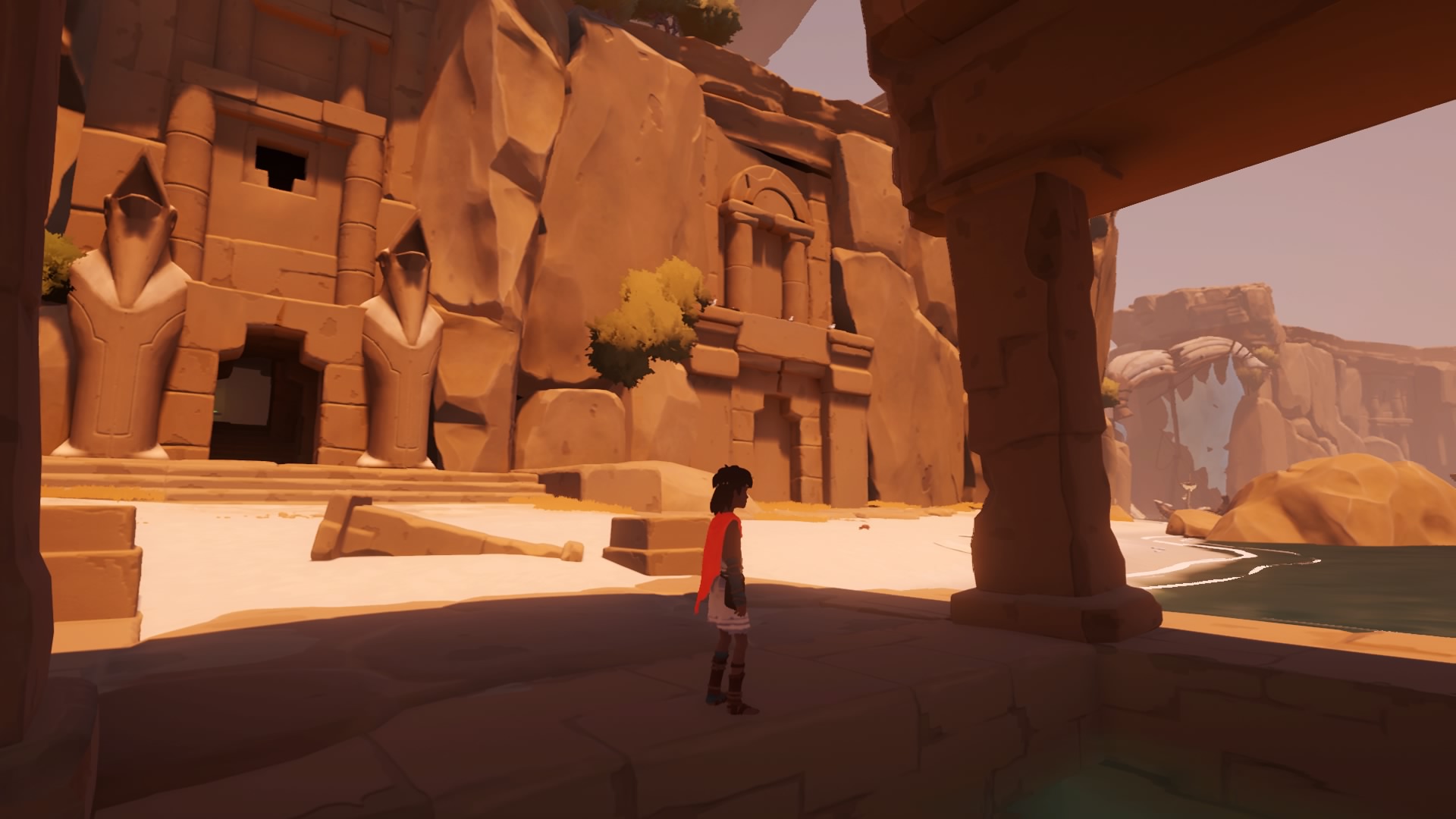 Comb the RiME desert for more outfits, emblems, toys, lullaby shells and shades with all the collectibles in Chapter 2: Anger.

Before you can start tracking down collectibles, you'll want to activate the many windmills throughout the area. The more storms there are overhead, the more you can safely explore the old wreck. A killer vulture-eagle wants the kid dead, and you'll have to drive it off with storm clouds.

This chapter introduces a new (and extremely rare) type of collectible. The strange statues are human-shaped pillars of salt that crumble when you touch them. There are only five in the game, and they won't appear in your collectibles menu at all. Knock down all five to unlock a secret achievement / trophy.

Strange Statue #1: From the very start of the chapter, turn around and find the single salt statue. Nudge it to make it crumble to collect it.

Emblem #6: Exiting the temple and reaching the first puzzle, continue into the opposite open doorway. It leads to a narrow door that into a small chamber with an emblem.

Strange Statue #2: Ditching the bridge, the kid will have to hide under the ruins to avoid the bird's swooping attacks. On the right, look for a small ruin (before reaching the windmill) with a half-circle shaped roof. The statue is located behind the structure.

Toy #4: Pinwheel - After summoning the storm at the windmill, drop down and look to the right on the ledge overlooking the shore. There's a tall white tower connected to the cliff by a long bridge. Enter the tower to collect this toy.

Lullaby Shell #3: Return to the second Strange Statue location -- the half-circle roof ruin. Far behind it, there's another underground entrance that leads into the a chamber with this collectible. Find it right and behind the windmill tower entrance.

Toy #5: Eagle - Continuing on, go to the large ruin entrance where the shadows are congregating. Going underground, you'll enter a large chamber with fish statues and a flame in the center of a bridge. Shout to light all the flames, then look down and right from the center. There's an optional path down below that leads to this toy.

Keyhole #2: After summoning the second storm in the windmill, use the block to climb onto the high wall. There's a deep dive below -- and a rocky cliff surrounding the hole. Jump onto the rocky section to find stairs leading down on the right. The stairs take you to a keyhole collectible.

Emblem #7: Return to the temple ruin you originally used to reach the beach area and the second windmill. The beach door is now surrounded by shades. Go left of that door to find a side door on the sunny section of the beach. Inside, the path leads to a room filled with spirit pots. Smash them all with shouts to reveal this emblem.

Lullaby Shell #4: Back out on the beach, find the area with the ruined boats. The tall sails will help you find your way. Opposite the boats, there's a ruin built into the cliff walls, to the left of the canyon. At the ramp, use the various white chalk mark ledges to reach the room with a lullaby shell.

Keyhole #3: In the underground ruin that leads to the third windmill area, look to the left of the sunken ship. There's a sneaky keyhole on a tiny ledge hidden in the back of the cave.

White Shade #2: Complete the third windmill and backtrack to the entrance of the third windmill area -- where you first had to hide from the bird under the wooden shacks. Near the cliff's ledge, there's an overturned ruined ship hull with the white shade underneath.

Outfit #4: With the storms covering the third area of the chapter, return to the starting area of the third zone, and move toward the bridge that connects to the canyons with stone structures cut into the walls. To the right of the bridge, there's a ledge you can climb down. At the bottom, enter the hidden room and get on the key-shaped platform. Stand on the corner, and shout to turn the platform and reach the outfit pedestal.

Emblem #8: Return to the top of the "island" in the area with the ruins cut into the cliff walls. Run toward the pair of bird statues (across the bridge) and turn left, going down the stairs. This is the main path -- use the fox to lead you to the tunnel with the fallen pillars. Beneath the pillars, there's a pile of spirit jars. Smash through to find this emblem.

Emblem #9: To the left of the tunnel that leads to the previous emblem, backtrack to the entrance and look for the opening above a gap, between two sets of unconnected stairs. Climb through the window to reach the emblem.

Emblem #10: Following the fox near the trench toward the white structure, look to the left for a ledge you can climb down. Follow the white chalk to reach the emblem pedestal through the open window.


That's everything in Chapter 2. Check the links above the article proper for even more RiME guides.
Related to:
kevin thielenhausfamily-puzzleguidepcps4rime agevideo gameswalkthroughxbox one
0
Tweet